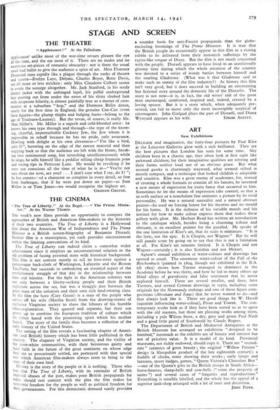 Applesauce! unlike most of the war-time revues pleases the eye all the time, and the ear most of it. There are no nudes and no enormous set-pieces of romantic obscurity : nor is there the usual small bad ballet to give the audience a spice of art. Miss Florence Desmond runs rapidly like a plague through the ranks of theatre and screen—Evelyn Laye, Delysia, Charles Boyer, Bette Davis, are all more or less stricken : only Miss Claudette Colbert seems to evade the scourge altogether. Mr. Jack Stanford, in his seedy dinner jacket with the unhinged lapel, his pallid underground face peering out from under the eaves of his shiny sleeked hair with desperate hilarity, is almost painfully true as a master of cere- monies at a suburban " hop," and the Darmora Ballet dance, surely for the first time in England, the genuine Can-Can (even their figures—the plump thighs and bulging busts—belong to the age of Toulouse-Lautrec). But the revue, of course, is really Mr. Max Miller's. Mr. Miller is a superb and cold-blooded artist : he knows his own type through and through—the type of the know- ing, cheerful, imperturbable Cockney Jew, the Jew whom it is impossible to rebuff because he has no pride, only assurance. Howling with delight at his own cleverness—" I'm like a bird, ain't I?", hovering on the edge of the rawest material and then stepping back so that the audience are left with the blame, break- ing into sentimental song, but scratching unselfconsciously while he sings, he sells himself like a peddlar selling cheap fountain pens and racing tips in Petticoat Lane. He would be revolting if he were not conscious all the time of what he is at—" You're not sure about me now, are you? . . . I don't care what I say, do I? "; he has construr ed a character so complete in every detail, so free from burlesque, that if he were put down on paper—as Sam Weller is or Tom Jones—we would recognise the highest art.