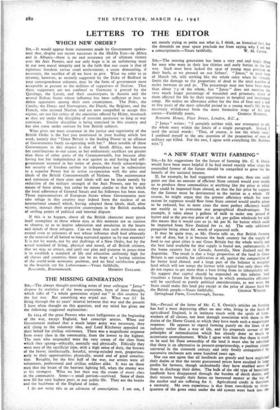 SIR,—The always thought-provoking notes of your colleague " Janus " dispose by statistics of the loose expression, born of loose thought, which talks of " a whole generation wiped out " in this country by the last war. But something was wiped out. What was it? In living through the 2o years' interval between that war and the present I have often thought on this question, and my mind has given me the following suggested explanation:

In 1914 all the great Powers who were belligerents at the beginning of the war, except England, had conscript armies. When our Government realised that a much larger army was necessary, they still clung to the voluntary idea, and Lord Kitchener appealed on their behalf for civilian volunteers. There was a magnificent response from every class in the community, from the lowest to the highest. The men who responded were the very cream of the class from which they sprang—ethically, mentally and physically. Ethically they were men of the sacrificial type, with a high sense of duty, the bravest of the brave; intellectually, forceful, strong-minded men, proportion- ately to their opportunities; physically, sound and of good constitu- tion. Roughly, for the first half of the war, our armies were all volunteers, professional and civilian soldiers alike. It was on those men that the brunt of the heaviest fighting fell, when the enemy was at his strongest. What we lost then was the cream of every class in the community. Some-3 small portion—survived. Some of them now fill the very highest posts in our public life. They are the brains and the backbone of the England of today.

I do not write this as an advocate of conscription. I am not, I am merely trying to point out what is, I think, an historical fact, but the demands on your space preclude me from saying why I am not a conscriptionist.—Yours faithfully, W. M. CROOK.