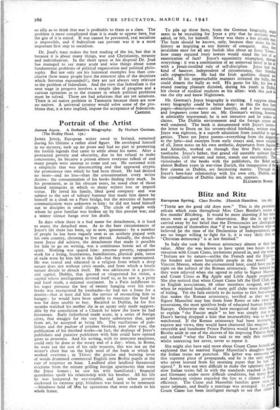 James Joyce. A Definitive Biography. By Herbert Gorman. (The Bodley Head. 558.) JAMES JOYCE, European writer owed to Ireland, remained during his lifetime a rather aloof figure. He enveloped himself in no mystery, took up no poses and had no part in promoting the foolish legends that came to settle about his name. After a protracted poverty and obscurity, due to his refusal to make concessions, he became a person almost everyone talked of and many people were anxious to come and see. He sustained with a simplicity that was disconcerting and that appeared cryptic the prominence into which he had been thrust. He had desired no more—and no less—than the consummation every writer desires : the consummation of his books finding their mark. In his prominent, as in his obscure years, he stood clear of those heated intimacies in which so many writers lose or imperil virtue. He loved his family, liked good company and was subject to the sort of solitary humour that made him dance by himself in a cloak on a Paris bridge, but the atrocities of human communication were unknown to him: he did not hand himself out to disciples in small change. The circle of people with whom he grew familiar was broken up by this present war, and a winter silence hangs over his death.

In days when there is a bad name for detachment, it is hard to assess the detached man. As to the bare circumstances of Joyce's life there has been, up to now, ignorance : by a number of people he has been vaguely seen as an aesthete piqued with his own country, choosing to live abroad. Actually, the detach- ment Joyce did achieve, the detachment that made it possible for him to go on writing, was a continuous heroic act of the spirit. Nothing was spared him : extreme poverty, repugnant work for a living, frustrations, humiliations, physical pain, sense of exile were by him felt to the full—but they were surmounted. He was reared and educated in a religion from which a deep nature does not without crisis secede, and from which a lonely nature dreads to detach itself. He was adolescent in a provin- cial capital, Dublin, that ignored or vituperated his vision, a capital whose intelligentsia devoted itself to, as he saw it, a petty and local myth, a national sentiment. In a Paris indifferent to his eager presence the boy of twenty hanging over his note- books was excruciated by toothache—he had not a franc for a dentist—that at least did him the service of reconciling him to hunger : he would have been unable to masticate the food he was for days unable to buy. Recalled to Dublin, he for five months watched his mother die in an agony only made support- able by the consolation of a Church he knew she knew he had foresworn. Early fatherhood made acute, in a series of foreign cities, that struggle for the very barest subsistence that, apart from art, he accepted as being life. The vacillations of pub- lishers and the pudeur of printers blocked, year after year, the publication of his finished works—in fact, the dealings of Joyce's publishers and putative - publishers with him could have opened gates to dementia. And his writing, with its immense exactions, could only be done at the weary end of a day: when, in Rome, he wore out the seat of his only trousers, this was not on the writer's chair but on the high stool of the bank at which he worked overtime ; in Trieste the precise and burning lover of words drummed commercial English into Berlitz pupils at the rate of tenpence an hour. Landlord after landlord threatened evictions from the minute grilling foreign apartments that were the Joyce homes ; he saw his wife humiliated ; financial quanderies spoilt his relationship with his brother. All his life he was hampered by eye-trouble, and just when poverty slackened its extreme grip, blindness was found to be imminent —blindness held off him by operations that were ordeals to his whole frame. To pile up these facts, from the Gorman biography, might seem to be recruiting for Joyce a pity that he certainly nate asked, or felt, for himself. Never was there a less pitiable man The facts should be known, only, because they make his lift history as inspiring as any history of conquest. Also, they invalidate once for all any foolish idea about an Ivory Tower._ how many reputed ivory towers would stand the test of ID examination of fact? Joyce's equanimity triumphed, through everything • it was a combination of an unmoved belief in hie en with a Jesuit-instilled rule of self-discipline. Joyce had that kind of hauteur, independent of circumstance, that Stendha calls espagnolisme. He had the Irish qualities shaped am steeled. If his imperturbable manners irritated the bully, they could disarm the bully as well. His gusto for life, his love ei round roaring pleasure dictated, during his youth in Dublin, his choice of medical students as his allies: with this pack he ran the city and knew Nighttown.

Mr. Gorman's Joyce biography is exciting. I suppose every biography could be better done: in this the first forty pages—descriptive--move rather heavily, and a few repetitions and longueurs come later on. Mr. Gorman's writing, however is admirably impersonal; he is not intrusive and he makes claims. The Dublin environment and the foreign scenes are well rendered. The book is documented with Joyce's lett the letter to Ibsen on his seventy-third. birthday, written when Joyce was eighteen, is a superb salutation from youthful to aged genius. There are Joyce poems—everything from the dogger to the lyric—and excerpts from early essays and, most valuable of all, Joyce notes on his own aesthetic, departures from Aquinas and Aristotle, worked on through that first Paris winter of toothache. Joyce's father, that grand old unstable stalwart John Stanislaus, civil servant and tenor, stands out excellently. The vicissitudes of the books with the publishers, the Babel and almost Bedlam years in war-time Zurich, the inauguration of first cinema in Dublin, are fascinating matter. Through Joyce's love-hate relationship with his own city, Dublin, the crystallisation of Dublin inside his art, appears.