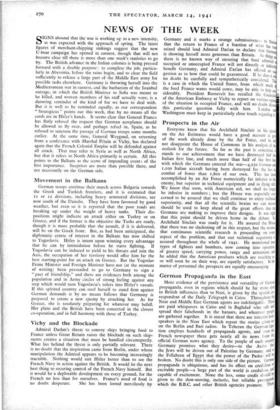 Prospects in the Air

Everyone knew that Sir Archibald Sinclair in his si..■ on the Air Estimates would have a good account to ; . of the work already done by the Air Force, and he not disappoint the House of Commons in his analysis of outlook for the future. So far as the past is concerned, • stands to our achievement that we have destroyed half the Italian first line, and much more than half of the first line with which the Germans entered the war-4,25o German and i,roo Italian aircraft having been destroyed for the loss in combat of fewer than 1,800 of our own. This has been accomplished by an Air Force numerically far inferior to the enemy, but superior in technical equipment and in flying skit. We know that soon, with American aid, we shall no longer be inferior in numbers ; but the House was especially con- cerned to be assured that we shall continue to enjoy technical superiority, and that all the scientific brains we can muster should be used to keep ahead of the great efforts that the Germans are making to improve their designs. It was right that this point should be driven home in the debate. Sr Archibald Sinclair was ready for it. He assured the Hot that there was no slackening off in this respect, but the reverse, that continuous scientific research is proceeding on evert aspect of the problem, and that our technical superiority is assured throughout the whole of 1941. He mentioned In types of fighters and bombers, now coming into operatic, of greater speed, carrying power, range and armament, and he added that the American products which are reaching or will soon be on their way, are equally satisfactory. In the matter of personnel the prospects are equally encouraging.