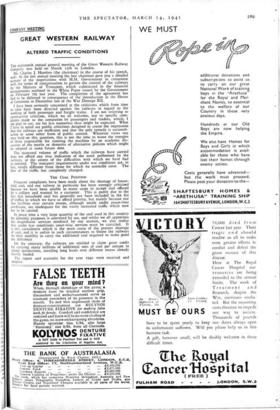 THE eighteenth annual general meeting of the Great Western Railway Company was held on March 12th in London.

Mr. Charles J. Hambro (the chairman) in the course of his speech, said: At the last annual meeting the late chairman gave you a detailed account of the negotiations with H.M. Government in connexion with the terms of compensation to govern the control of the railways by the Minister of Transport, which culminated in the financial arrangements outlined in the White Paper issued by the Government ou February 7th last year. The completion of the agreement has had to be deferred in consequence of the introduction in the House of Commons in December last of the War Damage Bill.

I have been seriously concerned at the criticisms which from time to time have been directed against the railways in regard to the working of both passenger and freight trains. I am not referring to constructive criticism, which we all welcome, nor to specific com- plaints made to the companies by passengers and traders, which, I am glad to say, are far less numerous than might be expected. What I have in mind are public criticisms designed to create the impression that the railways are inefficient and that the only remedy is nationali- sation or some other form of public control. Whatever views one may hold on this question, this is not the time to waste the energies of those responsible for running the machine by an academic dis- cussion of the merits or demerits of alternative policies which might be adopted at some future date.

The increased volume of traffic which the railways have carried does not afford any true indication of the work performed by the railways, or the extent of the difficulties with which we have had to contend. The transport requirements under war conditions are, in fact, totally different from those for which we normally cater. The flow of the traffic has completely changed.

Frequent complaints have been made about the shortage of house- hold coal, and our railway in particular has been strongly criticised because we have been unable in many cases to accept coal offered by a colliery and wanted by a customer. This is partly due to the fact that household coal has generally not been included in the list of traffics to which we have to afford priority, but mainly because our line facilities over certain routes, although ample under peace-time corditions, are inadequate for the vastly increased traffic which now has to be carried.

In peace time a very large quantity of the coal used in this country for domestic purposes is conveyed by sea, and whilst we all appreciate the magnificent services rendered by our seamen, we also realise that under war conditions coast-wise services must be curtailed. It is this curtailment which is the main cause of the present shortage of coal, and it is unfair in such circumstances to blame the railways for their inability to carry the additional coal required to make good the deficiency.

On the contrary, the railways are entitled to claim great credit for carrying many millions of additional tons of coal per annum to inland destinations, entailing long hauls over different routes already heavily loaded.

The report and accounts for the year 1940 were received and adopted.