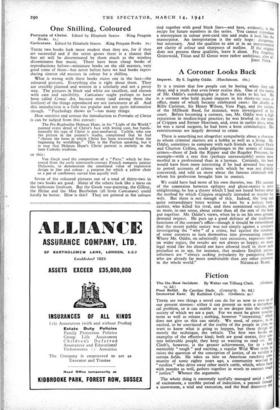 Caricature. Edited by Elizabeth Senior. (King Penguin Books. Is.) THESE two books look more modest than they are, for if they are successful and if the series grows there is a chance that fine art will be disseminated by them much as the wireless disseminates fine music. There have been cheap books of reproductions before—miniature books on the old masters, very good some of them—but never before have we had books repro- ducing sixteen old masters in colour for a shilling.

What is wrong with these books stares one in the face—the coloured pictures. Everything else is right about them. They are sensibly planned and written in a scholarly and not a prosy way. The pictures in black and white are excellent, and chosen with care and sensibility. Caricature ought perhaps to have been called Comic Art, because many (and among them the liveliest) of the things reproduced are not caricatures at all. And this introduction is a little too popular and not quite informative enough. " Psychology shows us "—too many things.

How sensitive and serious the introduction to Portraits of Christ is can be judged from this extract: The Pre-Raphaelite Holman Hunt, in his " Light of the World," painted every detail of Christ's face with loving care, but funda-• mentally his type of Christ is post-mediaevaL Carlyle, who saw the picture in the painter's studio, complained that he had " chosen the form in which Christ has been travestied from the beginning by worldlings." This is the Puritan speaking, but it is true that Holman Hunt's Christ portrait is entirely in the later Catholic tradition.

or this : Van Gogh used the composition of a " Pieta," which he bor- rowed from the early nineteenth-century French romantic painter Delacroix, to demonstrate the emotional value of expressive design in line and colour: a purpose for which a yellow chair or a pot of sunflowers served him equally well.

Seven of the coloured pictures out of a total of thirty-two in the two books are good. Many of the others look like a mess on the bathroom linoleum. But the Greek vase-painting, the Gillray, the Heine and the Max Beerbohm (all from Caricature) could hardly be better. How is this? They are printed in flat colours tied together with good black lines—and here, evidently, is the recipe for future numbers in the series. You cannot reproduce a masterpiece in colour post-card size and make it look like the masterpiece. An interpretation is the only hope: dangerous, but necessary. And the qualities to aim at in an interpretation are clarity of colour and sharpness of outline. If the original does not possess these qualities, leave it alone. Fra Angelico, Grilnewald, Titian and El Greco were rather ambitious, after all