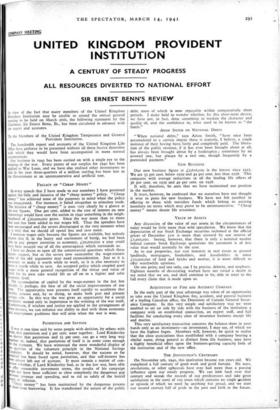 Is view of the fact that many members of the United Kingdom Provident Institution may be unable to attend the annual general meeting to be held on March 26th, the following statement by the Chairman, Sir Ernest Benn, Bt., has been circulated in advance with the report and accounts.

To the Members of the United Kingdom Temperance and General Provident Institution.

The hundredth report and accounts of the United Kingdom Life Office have perforce to be presented without all those festive flourishes with which they would have been accompanied in more normal circumstances.

Our business in 1940 has been carried on with a single eye to the winning of the war. Every penny of our surplus for 1940 has been applied to War Loan, and we have also realised other investments so that in the year three-quarters of a million sterling has been lent to the Government at an unremunerative and artificial rate.

FALLACY OF " CHEAP MONEY " In every speech that I have made to our members I have protested against the folly and injustice of the " cheap money " policy. " Cheap money" has achieved none of the purposes in mind when the policy was inaugurated. For instance, it failed altogether to stimulate trade. The injustice of " cheap money" is seen very clearly by a glance at the war figures. One per cent. added to the rate of interest on new borrowings would have cost the nation in 1940 something in the neigh- bourhood of £20,000,000 gross. Since the war more than to times that sum has been added to our wages bill. Thus the spenders have been encouraged and the savers discouraged at the very moment when it is vital that we should all spend less and save more.

I mention wages only because the figures are available, but nobody doubts that if, in the hurry and excitement of battl.c, we had been able to pay proper attention to economy, 00,000,000 a year could have been secured out of all the extravagance which surrounds us.

I have no desire to open all the controversial questions which these figures suggest, but as the savers now outnumber the wage-earners some of the old arguments may need reconsideration. Just as it is necessary to make it worth while to work, so it is also necessary to make it worth while to save. An accepted policy which coupled good Wages with a more general recognition of the virtue and value of thrift for its own sake would lift us all on to a higher and safer

The accumulation of capital by the wage-earners in the last few decades is, perhaps, the best of all the social improvements of our inc. The opportunity now presents itself rapidly to accelerate that healthy process and, by so doing, to make both past and present savings. safe. In this way the war gives an opportunity for a social evolution second only in importance to the winning of the war itself.. Furthermore, if wisdom and justice are applied to the arrangement of these matters, we can enhance our ability to deal with those economic mid employment problems that will arise when the war is won.

It was at one time said by some people with derision, by others with nde, that patriotism and 5 per cent. went together. Lord Kindersley his shown that patriotism and 24 per cent. can go a very long way together or, indeed, that patriotism of itself is in some cases enough or the moment. We have witnessed the most wonderful display of tae qualities of the voluntary principle in the National Savings LnPaign. It should be noted, however, that the success so far Ichleved has been based upon patriotism, and that self-interest has ken almost left out of account. It must remain a matter of con- ,le±tire whether, if Lord Kindersley had, as in the last war, been able offer reasonable investment terms, the results of his campaign right not have been sufficient to close completely the dangerous gap ce'ween revenue and spending, and to rid us safely of the horrid bogey of inflation.

eap money " has been maintained by the dangerous process snort-term borrowing. It has transformed the nature of the public debt, most of which is now repayable within comparatively short periods. I make bold to wonder whether, by this short-term device, we have not, in fact, done something to weaken the character and quality of, and the confidence in, what used to be known as " the funds."

ADAM SMITH ON NATIONAL DEBTS " When national debts," says Adam Smith, " have once been accumulated to a certain degree there is scarcely, I believe, a single instance of their having been fairly and completely paid. The libera- tion of the public revenue, if it has ever been brought about at all, has always been brought about by a bankruptcy ; sometimes by an avowed one, but always by a real one, though frequently by a pretended payment."

It will, therefore, be seen that we have maintained our position in the market.

It must, however, be confessed that we ourselves have not thought it wise to press for new business. We have not felt justified in offering to share with outsiders funds which belong to existing members on terms which may prove to be unremunerative. " Cheap money " means dearer life assurance.

VALUE OF ASSETS Any discussion of the value of our assets in the circumstances of today would be little more than wild speculation. We know that the depreciation of our Stock Exchange securities reckoned at the official prices of December 31st is more than covered by our reserve of £1,000,000. Seeing, however, that there is only a nominal market behind current Stock Exchange quotations the statement is of less value than would normally be the case.

As to our properties, our vast interests in real estate as ground landlords, mortgagees, freeholders, and leaseholders in some £10,000,000 of land and bricks and mortar, it is more difficult to offer worthwhile opinions.

On one point, and one only, can I be precise, definite, and emphatic. Eighteen months of devastating warfare have not raised a doubt in my mind that we are, and shall continue to be, able to meet to the full every claim that is made upon us.

ACQUISITION OF FIRE AND ACCIDENT COMPANY

In the early part of the year advantage was taken of an opportunity to take over the United Kingdom fire, accident, and general business of a leading Canadian office, the Dominion of Canada General Insur- ance Company. In this very simple and satisfactory way we were enabled to set uo side by side with the business of the institution a company with an established connection, an expert staff, and full facilities for conducting every class of insurance business except life and marine.

This very satisfactory transaction concerns the balance-sheet in your hands only as an investment—an investment, I may say, of which we have the highest hopes. Members will, however, be quick to realise that the close associations thus established with a company bearing a similar name, doing general as distinct from life business, may have a highly beneficial effect upon the business-getting capacity both of the institution and of the new office.

THE INSTITUTION'S CENTENARY On November 9th, 1940, this institution became too years old. We completed a full century of good work and good fortune. No wars, revolutions, or other upheavals have ever had more than a passing influence upon our steady progress. We can look back over that century and search the records of our predecessors and take great satisfaction in the story of too years which contains no single incident or episode of which we need be anything but proud, and we start our second century full of pride in the past and faith in the future.