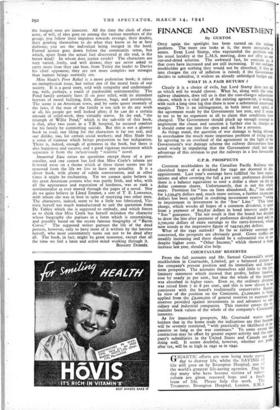 ONCE again the spotlight has been turned on the railway problem. The more one looks at it, the more intractable it seems. Even Lord Stamp, who expounded the problem with his usual lucidity at the L.M.S. meeting, does nor offer us any cut-and-dried solution. The awkward fact, he reminds us, that costs have increased and are still increasing. If the ordirlary stockholder got nothing they would not be absorbed; if they if, into charges the cry of inflation is raised; if the Government decides to subsidise, it widens an already unbridged budget gap,

WHAT IS A FAIR RETURN ?

Clearly it is a choice of evils, but Lord Stamp does not tell us which evil he would choose. What he, along with the other railway chairmen, does tell us is that the cost-charges adjustment clause, which is a vital part of the existing agreement, is working with such a long time lag that there is now a substantial uncovered margin. This is an infringement, in both letter and spirit, of the agreement made by the Government last year, and it seems to me to be no argument at all to claim that conditions have changed. The Government should pluck up enough courage to implement the clause and sanction a further rise in charges or it should come out into the open and ask for a revision.

As things stand, the question of war damage is being allowed to overshadow the much more important problem of rising costs. In agreeing to an overhaul of the agreement in the light of the Government's war damage scheme the railway directorates have acted wisely in stipulating that the Government shall not take advantage of this revision to put the railways in a less favourable position.

Common stockholders in the Canadian Pacific Railway who cherished hopes of a dividend for 1940 are doomed to dis- appointment. Last year's earnings have fulfilled the best expec- tations and after covering the full 4 per cent. preference dividend there is a balance equivalent to over a dollar a share on the 25 dollar common shares. Unfortunately, that is not the whole story. Provision for " loss on lines abandoned, &c.," has called for 1,539,475 dollars and, much more serious, a further to,000,000 dollars has been applied in crediting investment reserve "owing to impairment in investment in the ' Soo' Line." This latter charge, which wrecks all hopes of a common dividend, is apart from a payment of 805,830 dollars in bond interest under the " Soo" guarantee. The net result is that the board has decided to draw the line after payment of preference dividend and add its 2,700,000 dollars of extra earnings to the carry-forward, which now stands at the impressive figure of 144,045,295 dollars.

What of the 1941 outlook? So far as railway earnings are concerned, the prospects are obviously good. Gross traffics are steadily increasing and there should be a substantial rise in net despite higher costs. " Other Income," which showed a sharp increase last year, should also help.

COURTAULDS' RESERVES From the full accounts and Mr. Samuel Courtauld's review stockholders in Courtaulds, Limited, get a balanced picture of

the company's present position and its immediate and longer- term prospects. The accounts themselves add little to the pre- liminary statement which showed that profits, before taxation, rose by nearly 3o per cent., but that the whole of the inctosl was absorbed in higher taxes. Even so, the ordinary dividend was raised from 7 to 8 per cent., and this is now shown to be consistent with the board's traditionally conservative finance In view of the position on the Continent, £1,000,000 is beg applied from the L9,000,000 of general reserves to augment the reserves provided against investments in and advances to sub' sidiary and industrial companies. This transfer covers the re- mainder book values of the whole of the company's Continent interests. As for immediate prospects, Mr. Courtauld warns stock• holders that in the home trade the indications are that business will be severely restricted, " with practically no likelihood of ex." pansion so long as the war continues." To some extent this contraction may be offset by greater export activity and the or' pany's subsidiaries in the United States and Canada are 315° doing well. It seems doubtful, however, whether net profit, after tax, will be as high in 1941 as in 1940.