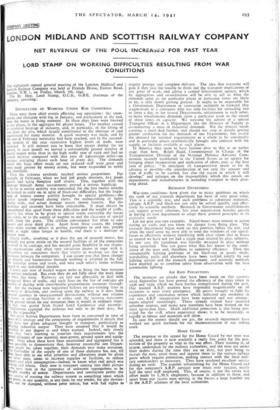 THE eighteenth annual general meeting of the London Midland and Scottish Railway Company was held at Friends House, Euston Road, London, N.W. 1, on Friday, March 7th, 1941. The Rt. Hon. Lord Stamp, G.C.B., G.B.E, chairman of the company, presiding: DIFFICULTIES OF WORKING UNDER WAR CONDITIONS There were three chief events affecting our operations: the snow- storms and blizzards with fog in January, and particularly at the end, were the worst in living memory. In three days lines were blocked at 313 places, in the aggregate for 48,000 hours. The weather caused al extensive hold-up of industry, and, in particular, of the lifting of coal from the pits, which largely contributed to the shortage of coal experienced for many months. A quick recovery was made, and by the end of February normality had been reached, and in the succeed- ing months of the year successive highest levels of traffic were recorded. It will interest you to learn that except during the ice period, in each month we moved a substantially greater number of loaded wagon miles than in the high traffic year of 1929 and had an overall increase compared with that year of 246,000,000 miles—an increase averaging 28,000 each hour of every day. The demands which this huge effort made on our reduced staff were great and were made greater by enemy action, but were responded to nobly and cheerfully.

Then the sickness epidemic reached serious proportions. For example, in February, when we had 398 goods shunters, 613 goods guards and 2,074 footplate staff absent. This, together with the shortage through Army recruitment, proved a serious handicap.

So far as enemy activity was concerned, for the first twelve months we learned to carry on in spite of black-out difficulties, but the begin- ning of intense enemy activity brought its special problems—the slower speeds imposed during alerts, the extinguishing of lights during raids, and actual damage meant slower transits. But the resilience and recovery have been remarkable. It must always be remembered that apart from these difficulties and the weight of traffic, priority has often to be given to special trains conveying the forces and stores, or to the supply of wagons to and the clearance of special traffic from the ports. The civilian convenience has often to take second and even third place. Apart from these causes, the longer trains make station delays in getting passengers in and out, parcels traffic at night takes longer to handle, and there is a shortage of trained men.

Special traffic, involving as it does the use of unusual routes, has naturally put great strain on the normal facilities of all the companies involved in its carriage, and has needed great flexibility in our respec- tive organisations and often very circuitous routes to cope with tt. Nt-gallons are sometimes made that blocks in working are due to eatousies between the companies. I can assure you that these charges are absurd, and harmonious through working is adopted to the full. L: exchange stores and stock, and take each other's trains without egard to any individual interest. I spoke just now of loaded wagon miles as being the best measure services rendered. But even they do not fully show the work done times like these. Railways are laid out physically to deal with cognised flows of traffic, and such lines on the law of averages are pabie of dealing with considerable proportionate increases through- But the increase now registered follows no pre-existing lines in canna or direction, and coming upon the railway as it does from usual quarters to unaccustomed destinations, without any relation layout or existing facilities at either end, the increase represents far greater strain on our resources than it would in ordinary times. fact, our genial Irish friend Lord Castlerosse said recently: Englishmen expected the railways not only to do their duty, but so the impossible."

Our great Service Departments have been so concerned in time of ce wan strategy and the programme of requirements it entails that eY have not given adequate thought to transport, particularly as ..cling industrial output. They have assumed that it would be vailab'e in any degree as and when wanted. Indeed, only slowly Ye they been learning to translate their requirements into the I elements of raw material, man-power, ground space and equip- Only when these have been ascertained and aggregated has it possible to demonstrate that, however reasonable one Depart- nt might be, taken together, their demands may make nonsense. e Controller of the supply of one of these elements has not, till been able to see what priorities and allocations must be given what steps taken to increase supplies or facilities, to reduce ins and civil consumption—indeed, to know what real pinch was ung and where. Only now is transport coming into their picture the next item in the ignorance of unknown aggregations to be ught worthy of notice. Departments and contractors prefer the Y course of treating the railway system as something upon which

i Y goods, n any quantity, at any time, by any sender, for any destina- can be dumped, without prior notice, but with full rights to require prompt and complete delivery. The idea that everyone will gain if they take the trouble to think out the transport implications of any piece of work, and advise a central Government agency, which by aggregation and co-ordination will be able to tell us what the demands upon us for particular places at particular times are likely to be, is only slowly gaining ground. It ought to be impossible for a Government Department or contractor suddenly to forward fifty wagon-loads to a consignee who has only facilities for unloading two or three a day, or for several Departments, unbeknown to each other, to make simultaneous demands upon a particular track to the extent of three times its capacity. We welcome the advent of a special Transport Officer in a Department like the Ministry of Supply as co-ordinating a mass of industrial demands. But the process needs carrying a good deal further, and should not stop at merely getting greater satisfaction for the demands of one Department, but enable the demand for national requirements as a whole to be continually and in particular places systematically brought into contrast with the supply, or facilities available at such places.

In America they seem to have become alive to this at an earlier stage than here. Ralph Budd, Commissioner in Charge of the Transportation Division of the National Defence Advisory Com- mission. recently established in the United States as an agency for bringing about co-operation and unification of effort, puts as the first item of policy: "to anticipate all transportation needs as far in advance as possible—the consideration of not only the amount and type of traffic to be carried, but also the region in which it will develop," and enlarges on the responsibility which this entails on departments and manufacturers in including transport in their plan- ning ahead.

RESEARCH DEPARTMENT War-time conditions have given rise to many problems on which the work of our research department has been of very great value. This is a scientific war, and such problems as substitute materials, salvage, A.R.P. and black-out can only be solved quickly and effec- tively by scientific methods. Research in Government establishments can suggest general solutions, but your organisation benefits greatly in having its own department to adapt these general principles to its particular needs.

Let me give you two examples. Signal-boxes must remain in action during air raids; and you know the danger from flying glass. The research department began work on this problem before the war, and when the need arose we were able to treat the windows of our signal- boxes so effectively without interfering with clear vision that in boxes so treated we have not yet had a single man injured by glass splinters. In one case the signalman was literally wrapped in glass without being scratched. You can guess what this has meant to the confi- dence of the men and, therefore, to operating efficiency. Then the innumerable lighting problems of the black-out in goods sheds, marshalling yards and elsewhere have been tackled jointly by our lighting section and the research department, and scientific methods have enabled us to combine safety from observation with the best permissible lighting Am RAID PRECAUTIONS The intensive air attacks that have been made on this country since September last have proved the efficiency of the steps taken in 1938 and 1939, which we have further strengthened during the year. Our trained A.R.P. workers have responded magnificently on all occasions to meet every emergency. All points brought to light by experience and continuous review which indicated any weakness in our vast A.R.P organisation have been reported and our arrange- ments adapted accordingly. Those already trained have received refresher courses, and many new members have been trained on the most up-to-date lines. Much additional protection is also being pro- vided for the staff, where experience shows it to be necessary, as rapidly as labour and materials will allow. In case the enemy should use gas, the research department have worked out quick methods for the decontamination of our rolling stock.

HOME GUARD The response to the appeal for the Home Guard by our men was splendid, and there is now available a really fine army for the pro- tection of the property so vital to the war effort. Their training is, of course, undertaken by the military authorities, and the men are under their orders during the time they are on duty, our part being to recruit the men, enrol them and appoint them to the various railway posts which require protection, making contact with the local mili- tary commanders as necessary. They have rendered excellent service during air raids. The number volunteering for the Home Guard and for this company's A.R.P. ,services now totals over 100,000, nearly half the total staff employed. This, of course, is not the entire war effort made by L.M.S. employees, because in addition to these, and apart from our 12,000 men serving in the forces, a large number are in the A.R.P. schemes of the local authorities.