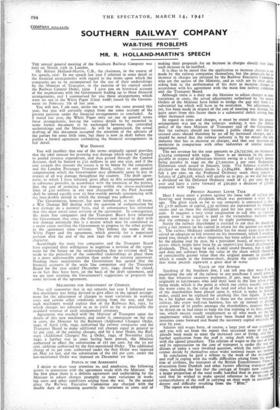 Mr. Robert Holland-Martin, C.B., the chairman, in the course of his speech, said: In my speech ' last year I referred in some detail to the financial arrangements with regard to the terms upon which the companies are to be recompensed for the use of their undertakings by the Minister of Transport, in the exercise of his control under the Railway Control Order, 1939. I gave you an historical account of the negotiations with the Government leading up to those financial arrangements, and I summarised for you those arrangements which were set out in the White Paper (Cmd. 6r68) issued by the Govern- ment on February 7th of last year.

You will not, I am sure, desire me to cover the same ground this year, but you will certainly expect from me some account of the present position under the financial arrangements so concluded. As I stated last year, the White Paper only set out in general terms these arrangements, leaving the various details to be recorded in some formal document to be exchanged between the controlled undertakings and the Minister. As will be appreciated, the actual drafting of this document occupied the attention of the advisers of the parties for some little time, but there is now in draft before the parties a formal agreement embodying the financial arrangements in full detail.

WAR DAMAGE You will recollect that one of the terms originally agreed provides that the total amount for restoring war damage which may be charged to pooled revenue expenditure, and thus passed through the Control Account, shall be limited to km millions in any one year, and if the cost exceeds this amount the excess is to be borne by the companies and the London Passenger Transport Board, subject to any general compensation which the Government may ultimately agree to pay in respect of all war damage throughout the country. The draft agree- ment, to which I have referred, gives effect to this arrangement and in substance provides, in accordance with the intention of the parties, that the cost of restoring war damage within the above-mentioned limit of Lao millions in any year chargeable to the Pool Account shall be spread equally over 13 four-weekly periods commencing with the four-weekly period in which the damage was suffered.

The Government, however, has now introduced, as you all know, a War Damage Bill dealing with the question of compensation for war damage on a national basis, and in consequence has intimated that this must entail some revision of the agreement.- In consequence, the main line companies and the Transport Board have informed the Government that since the Government now intend to deal with war damage nationally this is a matter which may be considered as a major cause entitling the Government to propose to the other parties to the agreement some revision. This follows the terms of the White Paper and the agreement, which provide for a negotiated revision after the end of the year 1940 for any cause of a major character.

Accordingly the main line companies and the Transport Board have expressed their willingness to negotiate a revision of the agree- ment for the future on the understanding that no revision shall be made to the prejudice of the controlled undertakings or place them in a more unfavourable position than under the existing agreement. Pending these negotiations the Government has agreed that the financial accounts of the main line companies and the Transport Board for the year ended December 31st, 1940, should be closed, as .in fact they have been, on the basis of the draft agreement, and we are now awaiting the Government's suggestions or proposals for some revision of the agreement.

MACHINERY FOR ADJUSTMENT OF CHARGES You will remember that in my remarks last year I informed you that machinery was being devised to give effect to the agreed arrange- ment for the adjustment of charges to meet variations in working costs and certain other conditions arising from the war, and that such machinery would replace that of the Railways Act, 1921, by which charges are adjusted so as to yield so far as practicable the standard revenue of each amalgamated company.

Agreement was reached with the Minister of Transport upon the details of this new machinery, and under it, consequent on the rise in costs, the Minister by the Railways (Additional Charges) Order, 1940, of April 17th, 1940, authorised the railway companies and the Transport Board to make additional rail charges equal in general to to per cent. of the existing charges, and by a later Order, the Rail- ways (Additional Charges) No. 4 Order, 1940, of November 23rd, 1940, a further rise in costs having been proved, the Minister authorised in effect the substitution of 161 per cent. for the so per cent. addition authorised by the first-mentioned Order. The additional charge of to per cent. authorised under the first Order was imposed on May 1st last, and the substitution of the 161 per cent, under the last-mentioned Order was imposed on December 1st last. •

POINTS IN THE AGREEMENT •

I desire to draw your attention to, and emphasise, the following points in connexion with the agreement made with the Minister. In the first place there is a definite agreement and undertaking by the Minister to adjust charges promptly to meet variations in work- ing costs and other conditions arising from the war. In the second place the Ratlway Executive Committee are charged with the double duty of estimating quarterly the variations in costs and of making their proposals for an Increase in charges should they deem such increase to be justified. It is thus to be noted that the application to increase charges is not made by the railway companies themselves, but the proposals for an increase in charges are initiated by the Railway Executive Committee who are the agents of the Minister, and as such are by their advice aiding him in the performance of his duty to increase charges in accordance with his agreement with the main line railway companies and the Transport Board.

Although there is a duty on the Minister to adjust charges to meet variations in costs, the actual adjustments authorised by the several Orders of the Minister have failed to bridge the gap and them is a substantial lag which will have to be overtaken. No adjustment, as yet, has been made in respect of the cost of meeting war damage, but quite apart from this factor there is a substantial deficit arising from other increased costs.

In regard to rates and charges, it must be stated that else present arrangement was not of the railways seeking; it was the definite policy of the then Minister of Transport and of the Government that the railways should not become a public charge and that in- creased costs should therefore be set off by increased charges, and :1 should be noted that the railway industry is by no means the only industry that has to increase its charges, and that our increases are moderate in comparison with other industries of similar national importance.

a dividend on the Deferred Ordinary stock of per cent. for the year and leave a carry forward of £91,930 a decrease of Lti,613 compared with 1939.

Here I must enter a protest against the loose talk of railway pro- fiteering and bumper dividends which was prevalent a wed or so ago. The plain truth so far as our company is concerned is this: Of £176 millions of capital, Lsg millions are represented by Ordinary stocks and on these the dividends paid for last year average 3 per cent. It requires a very vivid imagination to call this an excessive return even ii no regard is paid to the tremendous national work that the company is by day and by night performing. Surely the railway shareholder is entitled to ask that he should re- ceive a fair interest on his capital in return for the greater use made of it. The railwai Ordinary stockholder has for many years past not re- ceived an adequate or fair interest on his investment, which I would re- mind you, though it is often forgotten, has been added to automatically by the placing year by year, by a provident board, of moneys to re- serves which might have been by an improvident board distributed in dividends. That, it may be said, is only sound finance, but it adds to and does not subtract froin the value of the share which should he • of considerably greater value than the original amount in pounds st which it stands in the balance-sheet, despite the critics who asset that those pounds represent a great deal of water VALUE OF THE SYSTEM Speaking of the Southern line, I can tell you that were Ito be negotiating the sale of the railway to any purchaser I could prove te, him that whatever excessive payments, if any, may have been pit originally to landowners who sold their land to the line when it being made, which is the point at which our critics usually star: the water came in, the value of the land and what has at the e': of the shareholders been placed upon it, which is today in fir- order' could not be replaced for anything like that figure. It v be a far higher one, for beyond it there are the reserves whicli railway, like every well-run business, has set up instead of d. every penny of its profits amongst the shareholders, reserves th • be drawn on in bad times to keep the line running at its best, re,o: too, which ensure steady employment to all who work on the L124 employment which would not have been found for them had pd investors come forward and found the necessary capital originally a year by year. Salaries and wages form, of course, a large part of our expendito and you will see from the report that increased rates of pay h2a . already been made to meet the increased cost of living, and that ' further application from the staff is acing dealt with in accordance with the agreed procedure. The relation of wages to the cost of linl4 and its repercussion on the cost of transport is under the War ,51',:; ditions of today a very involved question, which the railways any

cannot decide by themselves since wider national issues are :1

In conclusion he paid a tribute to the work of the managr and staff in coping with the traffic difficulties arising from the el tion of civilians, the transport of the British Expeditionary evacuation from Dunkirk and other factors affecting transport tions, including the fact that the carriage of freight now cowl: a larger proportion of the total traffic handled than in peace-time said that he wished to make special reference to the braver. resourcefulness of the staff in carrying on their work in condinc danger and difficulty resulting from the "Blitz."