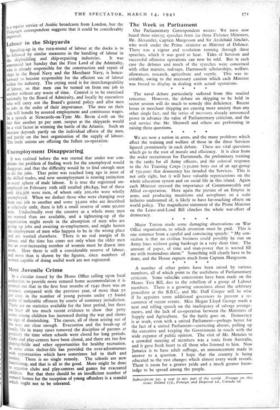 More Juvenile Crime In a circular issued by the Home

Office calling upon local authorities to provide more remand home accommodation it is pointed out that in the first four months of 1940 there was an increase, compared with the previous year, of more than 50 per cent. in the number of young persons under 17 found guilty of indictable offences by courts of summary jurisdiction. There are no statistics available for the later period, but there has been all too much recent evidence to show that petty crime among children has increased during the war and shows no sign of diminishing. The causes, all of them arising out of the war, are clear enough. Evacuation and the break-up of family life in many cases removed the discipline of parents at Precisely the time when schools were closed for long periods. Clubs and play-centres have been closed, and there are too few Playing-fields and other opportunities for healthy recreation. In some cities shelter-life has provided the over-adventurous with opportunities which have sometimes led to theft and looting. There is no single remedy. The schools are now functioning, and that is all to the good. More might be done to organise dubs and play-centres and games for evacuated children. But that there should be an insufficient number of remand homes for the reception of young offenders is a scandal which ought not to be tolerated.