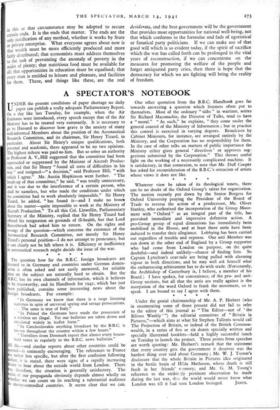 Page 5, 14 March 1941 — Whatever view be taken of its theological tenets, there can
Close

Whatever view be taken of its theological tenets, there can

be no doubt of the Oxford Group's talent for organisation. The motion recently put down by the Senior Burgess for Oxford University praying the President of the Board of Trade to reverse the action of a predecessor, Mr. Oliver Stanley, who authorised the incorporation of the Group Move- ment with " Oxford " as an integral part of the title, has provoked immediate and impressive defensive action. A pro-Group group of equal dimensions has immediately been mobilised in the House, and at least three antis have been induced to transfer their allegiance. Lobbying has been carried out regardless of trouble and expense. One anti Member was run down at the other end of England by a Group supporter who had come from London on purpose, on the quite doubtful—and indeed unlikely—chance of finding him. So Captain Lyttelton's coat-tails are being pulled with alarming vigour in both directions, and he may well ask himself what the embarrassing arbitrament has to do with trade. (Fortunately, the Archbishop of Canterbury is, I believe, a member of his Board.) I have spoken, for convenience, of the pro- and anti- Group sections, but all that the antis are really against is the usurpation of the word Oxford to frank the movement, so to speak. I am bound to say I agree with them.