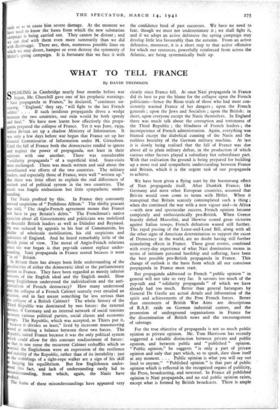 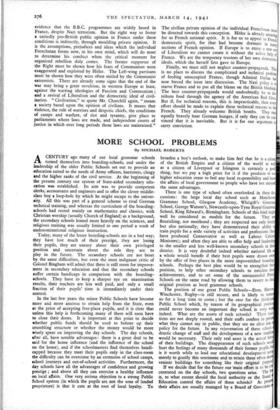 WHAT TO TELL FRANCE

PEAKING in Cambridge nearly four months before war 0 began, Mr. Churchill gave one of his prophetic warnings.- " Nazi propaganda in France," he declared, " continues un- ceasing. England,' they say, ' will fight to the last French soldier' . . . If such insidious propaganda drove a wedge between the two countries, our ruin would be both speedy and final." We have now learnt how effectively this propa- ganda prepared the collapse of France. Yet it was June, 1939, before Britain set up a shadow Ministry of Information. It was only a few days before war began that France set up her General Commissariat of Information under M. Giraudoux. Until the fall of France both the democracies tended to ignore and neglect the power of propaganda, not least in their relations with one another. There was considerable " solidarity propaganda " of a superficial kind. State-visits were exchanged. There was much written and said about the co-ordinated war efforts of the two countries. The military leaders, and especially those of France, were well " written up." But there was little effort to explain the real differences of utlook and of political system in the two countries. The result was fragile enthusiasm but little sympathetic under- standing.

The Nazis profited by this. In France they constantly revived suspicions of " Perfidious Albion." The thrifty peasant as told, " The Anglo-French agreement means that France ill have to pay Britain's debts." The Frenchman's native ynicism about all Governments and politicians was mobilised to discredit British leaders as well as Daladier and Reynaud. e was seduced by appeals to his fear of Communism, his islike of wholesale mobilisation, his old suspicions and ealousies of England. And he heard remarkably little of the ritish point of view. The moral of Anglo-French relations race the war began is that pep-talk cannot replace under- tanding. Nazi propaganda in France scored because it went in off " Britain.

In Britain there has always been little understanding of the uliarities of either the democratic ideal or the parliamentary stern in France. They have been regarded as merely inferior ersions of the English ideal and the English model. How any Englishmen understood the individualism and the anti- ericalism of French democracy? How many understood at the collapse of a French Cabinet scarcely ever entailed an ection, and in fact meant something far less serious than e collapse of a British Cabinet? The whole history of the rd Republic was dominated by two forces: the external enace 'if Germany and an internal network of social tensions tween various political parties, social classes and economic rou-s. F The Republic, which was accepted, as Thiers put it, because it divides us least," lived by incessant manoeuvring med at striking a balance between these two forces. The public suited France because it was the only political system hich could allow for this constant readjustment of forces: that in one sense the recurrent Cabinet reshuffles which so rried the Englishman were an expression of the resilience d stability of the Republic, rather than of its instability: just the wobblings of a tight-rope walker are a sign of his skill keeping his equilibrium. But few Englishmen under- ()ed this fact, and lack of understanding easily led to sunderstanding, from which, again, the Nazis have ofited.

The fruits of these misunderstandings have appeared very clearly since France fell. At once Nazi propaganda in France did its best to put the blame for the collapse upon the French politicians—hence the Riom trials of those who had most con- sistently warned France of her dangers ; upon the French generals ; upon the Jews and Socialists ; upon the British: in short, upon everyone except the Nazis themselves. In England there was much talk about the corruption and rottenness of the Third Republic ; the blindness of French leaders ; the incompetence of French administration. Again, everything was blamed except the diabolical cunning of the Nazis and the ruthless brutality of the German military machine. At last it is slowly being realised that the fall of France was due above all to plain military defeat, in the production of which various other factors played a subsidiary but subordinate part. With that realisation the ground is being prepared for building up a more real and sympathetic understanding between France and Britain, which it is the urgent task of our propaganda to achieve.

We have been given a flying start by the boomerang effect of Nazi propaganda itself. After Dunkirk France, like Germany and most other European countries, assumed that Britain would soon come to terms with Hitler. When it transpired that Britain scarcely contemplated such a thing ; when she continued the war with a new vigour and—in Africa —with new and spectacular success, French opinion became completely and enthusiastically pro-British. When Greece bravely defied Mussolini, and likewise scored great victories against Italian troops, French defeatism waned still further. The rapid passing of the Lease-and-Lend Bill, along with all the other signs of American determination to support the cause of Democracy in the world, are no doubt having still further stimulating effects in France. These great events, combined with every-day experience of what Nazi domination means in terms of intimate personal hardship and suffering, have been the best possible pro-British propaganda in France. This change of outlook is the basis from which all our conscious propaganda in France must start.

But propaganda addressed to French " public opinion " in general will not take us very far. It savours too much of the pep-talk and " solidarity propaganda " of which we have already had too much. Better than general harangues by General De Gaulle are actual details and information of the spirit and achievements of the Free French forces. Better than statements of British War Aims are descriptions of R.A.F. raids on German industrial centres, and the promotion of underground organisations in France for the dissemination of British news and the encouragement of sabotage.

For the true objective of propaganda is not so much public opinion as private opinion. Mr. Tom Harrisson has recently suggested a valuable distinction between private and public opinion, and between public and " published " opinion. " Public opinion," he suggests " is only a part of private opinion and only that part which, so to speak, dare show itself at any moment. . . . Public opinion is what you will say out loud to anyone." " Published opinion " is that part of public opinion which is reflected in the recognised organs of publicity, the Press, broadcasting, and newsreel. In France all published opinion is Nazi propaganda, and no real public opinion exists, except what is formed by British broadcasts. There is ample evidence that the B.B.C. programmes are widely heard in France, despite Nazi terrorism. But the right way to foster a unitedly pro-British public opinion in France under these conditions is indirectly, through moulding private opinion. It is the assumptions, prejudices and ideas which the individual Frenchman forms now, in his own mind, which will do most to determine his conduct when the critical moment for organised rebellion duly comes. The former supporter of the Right must be shown bow his fears of Communism were exaggerated and exploited by Hitler. The Left-wing partisans must be shown how they were often misled by the Communist extremists. There are already some signs that the end of the war may bring a great revulsion, in western Europe at least, against the warring ideologies of Fascism and Communism ; and a revival of Liberalism and the democratic ideal of civil- isation. " Civilisation," to quote Mr. Churchill again, " means a society based upon the opinion of civilians. It means that violence, the rule of warriors and despotic chiefs, the conditions of camps and warfare, of riot and tyranny, give place to parliaments where laws are made, and independent courts of justice in which over long periods those laws are maintained." The civilian private opinion of the individual Frenchman must be directed towards this conception. Hitler is already arousing for us French national spirit. It is for us to appeal to French democratic spirit, for that had become dormant in many sections of French opinion. If Europe is to enjoy a new era of Liberalism we cannot create it without the active help of France. We are the temporary trustees of her own democratic ideals, which she herself first gave to Europe.

Finally, we must still not neglect counter-propaganda. This is no place to discuss the complicated and technical problem of feeding unoccupied France, though Admiral Dalian has now forced the issue into discussion. The Nazi policy is to starve France and to put all the blame on the British blockade. The best counter-propaganda would undoubtedly be to dis- tribute food through the agency of the American Red Cron But if, for technical reasons, this is impracticable, then every effort should be made to explain these technical reasons to the French. They already welcome British bombs. They may equally bravely bear German hunger, if only they can be con- vinced that it is inevitable. But it is for our arguments to carry conviction.