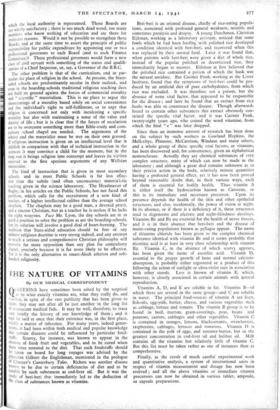 THE NATURE OF VITAMINS

By OUR MEDICAL CORRESPONDENT

nUESTIONS have sometimes been asked by the sceptical ice as to what exactly vitamins are, what they really do, and '.nether, in spite of the vast publicity that has been given to them, they may not after all be just another in the long list of evanescent medical fads. It may be well, therefore, to trace very briefly the history of our knowledge of them ; and it may be said at once that their existence was, in the first place, wholly a matter of inference. For many years, indeed gener- ations, it had been within both medical and popular knowledge that certain diseases could be influenced by particular food- stuffs. Scurvy, for instance, was known to appear in the absence of fresh fruit and vegetables, and to be cured when these were restored to the diet. That such foodstuffs should be taken on board for long voyages was advised by the Physician Gilbert the Englishman, mentioned in the prologue of Chaucer's Canterbury Tales. Rickets was another disease known to be due to certain deficiencies of diet and to be curable by such substances as cod-liver oil. But it was the study of beri-beri that immediately led to the deduction of the class of substances known as .vitamins. Beri-beri is an oriental disease, chiefly of rice-eating popula- tions, associated with profound general weakness, neuritis and sometimes paralysis and dropsy. A young Dutchman, Christian Eijkman, working as a laboratory assistant, noticed that some fowls which he had been feeding with polished rice developed a condition identical with beri-beri, and recovered when this was replaced by their normal food. Later it was found that, when patients with beri-beri were given a diet of whole rice, instead of the popular polished or decorticized rice, they immediately began to recover. Eijkman at first believed that the polished rice contained a poison of which the husk was the natural antidote. But Casimir Funk, working at the Lister Institute, found that the symptoms of beri-beri could be pro- duced by an artificial diet of pure carbohydrates, from which rice was excluded. It was therefore not a poison, but the absence of some vital factor, that appeared to be responsible for the disease ; and later he found that an extract from rice ,husks was able to counteract the disease. Though afterwards found to contain other substances this extract obviously con- tained the specific vital factor, and it was Casimir Funk, twenty-eight years ago, who coined the word vitamine, from which the final " e " was later dropped.

Since then an immense amount of research has been done on the subject by such workers as Gowland Hopkins, the Mellt.nbys, Plimmer, McCarrison, Windaus and many others, and a whole group of these specific vital factors, or vitamins, has been discovered and, for convenience, given an alphabetical nomenclature. Actually they are chemical substances of very complex structure, many of which can now be made in the laboratory ; and although a great deal remains unknown as to their precise action in the body, relatively minute quantities having a profound general effect, yet it has now been proved beyond reasonable doubt that, in their various ways, each of them is essential for bodily health. Thus vitamin A is either itself the hydrocarbon known as Carotene, or this is its immediate and necessary precursor. Upon its presence depends the health of the skin and other epithelial structures, and also, incidentally, the power of vision at night. In its absence, or if there is a deficiency of it, these structures tend to degenerate and ulcerate and night-blindness- develops. Vitamins Br and B2 are essential for the health of nerve tissues, and it is in their absence that beri-beri and the disease of maize-eating populations known as pellagra appear. The name of thiamine chloride has been given to the complex chemical substance identical with vitamin Br and it seems probable that nicotinic acid is at least in very close relationship with vitamin B2. Vitamin C, in the absence of which scurvy appears, has been given the name of ascorbic acid. Vitamin D, essential to the proper growth of bone and normal calcium- absorption, is probably either ergosterol or a product of this following the action of sunlight or ultra-violet rays in association with 'other sterols. Less is known of vitamin E, which, however, is closely associated in certain animals with normal reproduction.

Vitamins A, D, and E are soluble in fat. Vitamins B—of which there are several in the same group—and C are soluble in water. The principal food-sources of vitamin A are liver, fish-oils, egg-yolk, butter, cheese, and various vegetables such as cabbage, lettuce and tomato. The vitamin B group is to be found in beef, mutton, grain-coverings, peas, beans and potatoes, carrots, cabbages and other vegetables. Vitamin C is contained in oranges, lemons, blackcurrants, strawberries, raspberries, cabbages, lettuces and tomatoes. Vitamin D is contained in the yolk of eggs, and summer-butter, but in. the greatest concentration in cod-liver oil and halibut oil. Milk contains all the vitamins but relatively little of vitamin C. But this list must be taken rather as one of instances than as comprehensive.

Finally, as the result of much careful experimental work and quantitative analysis, a system of international units in respect of vitamin measurement and dosage has now been evolved ; and all the above vitamins or immediate vitamin precursors can now be obtained in various tablet, ampoule, or capsule preparations.