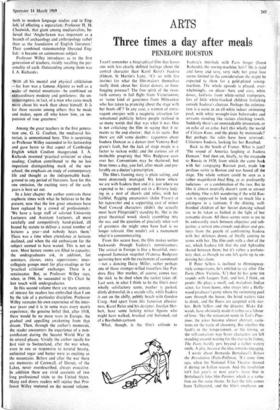 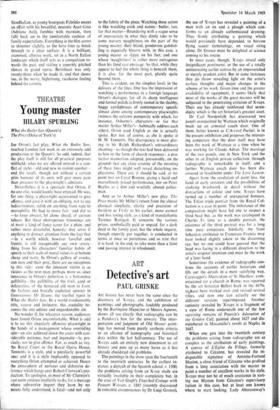 (Odeon, St Martin's Lane, 'A')—or with less instinct for what the film-makers themselves really think about her. Great dancer, or hum-

bugging poseuse? The free spirit of the twen- tieth century in full flight from Victorianism,

or 'some kind of governess from Milwaukee who has taken to prancing about the stage with her boots off'? In any case, a woman of extra- vagant energies with a magnetic attraction for sensational publicity before people realised in so many words that that was what it was. One is not criticising the film in saying that it re- mains to the end elusive: that is its tactic. But there are still some doubts: vagueness about Isadora Duncan as a dancer (not Vanessa Red- grave's fault, but the lack of stage magic is a factor to reckon with); and the curious air of invincible propriety that Miss Redgrave casts over her. Conventions may be shattered; but three times a day, you feel, after meals and pre- ferably on a doctor's prescription.

The film's framing story is plain sailing, and most dextrously managed. We know where we are with Isadora then and it is just where we expected to be: camped out in a Riviera lodg- ing in a nest of shawls and relics, with her faithful, flagging amanuensis (John Fraser) at his typewriter and a supporting cast of minor Noel Coward characters (didn't she actually meet Scott Fitzgerald?) standing by. She is the great theatrical wreck slowly crumbling into the sea; and the question of precisely what sort of greatness she might once have had is no longer relevant. One needn't ask a monument what it is commemorating.

From this secure base, the film makes sorties backwards through Isadora's reminiscences.

The arrival in Europe is like a beautiful, over- exposed Jamesian snapshot (Vanessa Redgrave quivering here with the excitement of command) —not a dancing Daisy Miller, rather perhaps one of those stronger-willed travellers like Pan- dora Day. Her mother, of course, comes too; the stick to be shed when the rocket takes off.

Last seen, in what I think to be the film's most wholly satisfactory scene, mother is parked, dimly distressful, in a seaside villa, while Isadora is out on the chilly, pebbly beach with Gordon Craig. And apart from this Jamesian allusive- ness, Karel Reisz and his designer, Jocelyn Her- bert, have some lurking minor figures who might have walked, brushed and buttoned, out of a Beerbohm cartoon.

What, though, is the film's attitude to Isadora's interlude with Paris Singer (Jason Robards), the sewing-machine heir? He is staid and fussy and very, very rich; her great love seems limited to the consideration she might be expected to show for a gold-plated sewing- machine. The whole episode is played, over- whelmingly, on decor—hats and cars, white doves, fanfares from white-suited trumpeters,

lots of little white-frocked children frolicking outside Isadora's chateau. Perhaps the culmina- tion is a.scene in an all-white indoor swimming pool, with white wrought-iron balustrades and servants standing like statues clutching towels. Suddenly there's an unmistakable intonation, or an echo of an echo. Isn't this wholly the world of Citizen Kane, and the picnic by motorcade? But perhaps the roles have been reversed: Citizeness Isadora, looking for her Rosebud.

Back to the South of France. What is jazz? 'The sound of America laughing at Isadora Duncan.' And then on, finally, to the escapade to Russia in 1920, from which she came back with her rampaging Russian poet, made hes perilous sortie to Boston and was booed off the stage. The whole venture could be seen as a rather magnificent final fling, or as profoundly ludicrous—or a combination of the two. But to film it almost neutrally doesn't seem to answer anything. One is left wondering if the wild Rus- sian is supposed to look quite so much like a pekingese in a tantrum; if the shining, well- brushed children of her Soviet dancing school are to be taken as bathed in the light of her romantic dream. All these scenes seem to me to be awkwardly stuck between objective and sub- jective; a retreat into crowds and decor and ges- tures from the puzzle of confronting Isadora with her defences down, of finally coming to terms with her. The film ends with a shot of the sea, which Isadora felt that she and Aphrodite shared between them; but it's rather a perfunc- tory shot, as though no one felt quite up to en- dorsing her claim.

If Peter Sellers is inclined to Hemingway- style comparisons, he's entitled to say after The Party (New Victoria, `U') that he has gone ten

• rounds with Jacques Tati; and lost, I think, on points. He plays a small, sad, maladroit Indian actor, far from home, who strays into a Holly- wood producer's party where the swimming pool runs through the house, the hired waiters take

to drink, and the floors are carpeted with star- lets. Both Sellers and the director. Blake Ed- wards, have obviously made it rather as a labour of love: like the restaurant scene in Tati's Play- time, the jokes become almost abstract, varia-

tions on the tactic of clowning. But whether the fault's in the temperament, or the timing, or the self-conscious way lesser characters are left standing around waiting for the star to be funny,

The Party hardly gets beyond a rather watery smile. A pity, because the idea remains engaging.

I wrote about Bernardo Bertolucci's Before the Revolution (Paris-Pullman, 'X') some time ago, when the National Film Theatre showed it during an Italian season. And the revolution isn't last year's or next year's—leave that to Bertolucci's later film Partner, which is a varia- tion on the same theme. In fact the title comes - from Talleyrand, and the film's emphases are Sfendhalian, as young bourgeois Fabrizio essays an affair with his beautiful, neurotic Aunt Gina (Adriana Asti), fumbles with marxism, then fall? back on to the comfortable cushion of family expectations. Everything in the film seems to shimmer slightly, as the hero tries to break through to a clear surface. It is a brilliant, crammed, allusive work, set in a North Italian landscape which itself acts as a compulsion to- wards the past, and risking a superbly pitched climax in grand opera. Bertolucci was only twenty-three when he made it; 'and that shows too, in the nervy, highstrung, racehorse feeling behind the camera.