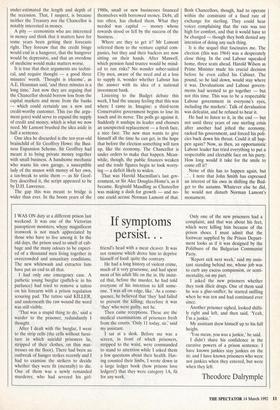 I WAS ON duty at a different prison last weekend. It was one of the Victorian panopticon monsters, whose magnificent ironwork is not much —areciated by those who have to live among it. In the old days, the prison used to smell of cab- bage and the many odours to be expect- ed of a thousand men living together in overcrowded and unsanitary conditions. The new whitewash and extractor fans have put an end to all that.

I had only one emergency case. A pathetic young burglar (paffeh-ic in his parlance) had tried to remove a tattoo on his forearm with a prison regulation scouring pad. The tattoo said KILLER, and underneath the raw wound the word was still visible.

'That was a stupid thing to do,' said a warder to the prisoner, redundantly I thought.

After I dealt with the burglar, I went to the strip cells (the cells without furni- ture in which suicidal prisoners lie, stripped of their clothes, on thin mat- tresses on the floor). There had been an outbreak of hunger strikes recently and I had to examine the strikers to decide whether they were fit (mentally) to die. One of them was a newly remanded murderer, who had severed his girl- friend's head with a meat cleaver. It was not remorse which drove him to deprive himself of food: quite the contrary.

He had a long history of violent crime, much of it very gruesome, and had spent most of his adult life on the in. He insist- ed that, before the murder, he had told everyone of his intention to kill some- one. 'I was all on edge, like.' As a conse- quence, he believed that 'they' had failed to prevent the killing; therefore it was 'they' who were guilty, not he.

Then came receptions. These are the medical examinations of prisoners fresh from the courts. 'Only 11 today, sir,' said my assistant.

I sat at a desk. Before me was a screen, in front of which prisoners, stripped to the waist, were commanded to stand to attention while I asked them a few questions about their health. Hav- ing counted their limbs, I wrote down in a large ledger book (how prisons love ledgers!) that they were category 1A, fit for any work. Only one of the new prisoners had a complaint, and that was about his feet, which were killing him because of the prison shoes. I must admit that the footwear supplied by the Prison Depart- ment looks as if it was designed by the Politburo of the Bulgarian Communist Party.

'Report sick next week,' said my assis- tant standing behind me, whose job was to curb any excess compassion, or senti- mentality, on my part.

I asked the new prisoners whether they took illicit drugs. One of them said he was a glue-sniffer; he started sniffing when he was ten and had continued ever since.

Another prisoner sighed, looked shifti- ly right and left, and then said, 'Yeah, I'm a junkie.'

My assistant drew himself up to his full height.

I didn't share his confidence in the curative powers of a prison sentence. I have known junkies stay junkies on the in; and I have known prisoners who were not junkies when they entered, but were when they left.