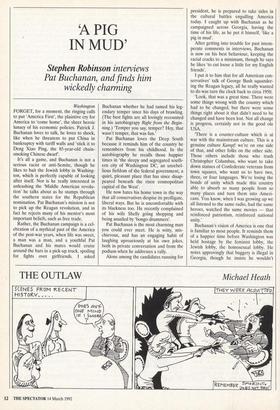 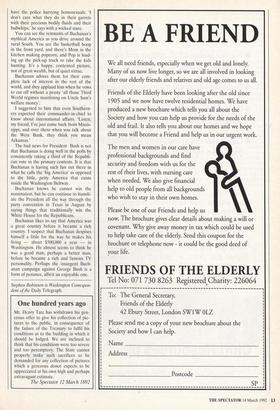 Washington FORGET, for a moment, the ringing calls to put 'America First', the plaintive cry for America to 'come home', the sheer heroic lunacy of his economic policies. Patrick J. Buchanan loves to talk, he loves to shock, like when he threatens to put China in bankruptcy with tariff walls and 'stick it to Deng Xiao Ping, the 85-year-old chain- smoking Chinese dwarf.

It's all a game, and Buchanan is not a serious racist or anti-Semite, though he likes to bait the Jewish lobby in Washing- ton, which is perfectly capable of looking after itself. Nor is he really interested in unleashing the 'Middle American revolu- tion' he talks about as he stumps through the southern states for the Republican nomination. Pat Buchanan's mission is not to pick up the Reagan revolution, and in fact he rejects many of his mentor's most important beliefs, such as free trade.

Rather, the Buchanan campaign is a cel- ebration of a mythical past of the America of the post-war years, when life was sweet, a man was a man, and a youthful Pat Buchanan and his mates would cruise around the bars in a pick-up truck, spoiling for fights over girlfriends. I asked

Buchanan whether he had tamed his leg- endary temper since his days of brawling. (The best fights are all lovingly recounted in his autobiograpy Right from the Begin- ning.) 'Temper you say, temper? Hey, that wasn't temper, that was fun.'

Pat Buchanan loves the Deep South because it reminds him of the country he remembers from his childhood. In the autobiography he recalls those happier times in 'the sleepy and segregated south- ern city of Washington DC, an unrebel- lious fiefdom of the federal government, a quiet, pleasant place that has since disap- peared beneath the risen cosmopolitan capital of the West'.

He now hates his home town in the way that all conservatives despise its profligate, liberal ways. But he is uncomfortable with its blackness too. He recently complained of his wife Shelly going shopping and being assailed by 'bongo drummers'.

Pat Buchanan is the most charming man you could ever meet. He is witty, mis- chievous, and has an engaging habit of laughing uproariously at his own jokes, both in private conversation and from the podium when he addresses a rally.

Alone among the candidates running for president, he is prepared to take sides in the cultural battles engulfing America today. I caught up with Buchanan as he campaigned across Georgia, having the time of his life, as he put it himself, 'like a pig in mud'.

After getting into trouble for past intem- perate comments in interviews, Buchanan is now on his best behaviour, keeping the racial cracks to a minimum, though he says he likes 'to cut loose a little for my English friends'.

I put it to him that for all American con- servatives' talk of George Bush squander- ing the Reagan legacy, all he really wanted to do was turn the clock back to circa 1950.

`There is a counter-culture which is at war with the mainstream culture. This is a genuine culture Kampf: we're on one side of that, and other folks on the other side. Those others include those who trash Christopher Columbus, who want to take down statues of Confederate veterans from town squares, who want us to have two, three, or four languages. We're losing the bonds of unity which made this country able to absorb so many people from so many places and turn them into Ameri- cans. You know, when I was growing up we all listened to the same radio, had the same heroes, watched the same movies — that reinforced patriotism, reinforced national unity.'

Buchanan's vision of America is one that is familiar to most people. It reminds them of a happier time before Washington was held hostage by the feminist lobby, the Jewish lobby, the homosexual lobby. He notes approvingly that buggery is illegal in Georgia, though he insists he wouldn't

have the police harrying homosexuals: don't care what they do in their garrets with their precious bodily fluids and their bullwhips,' he says with a wicked stare.

You can see the remnants of Buchanan's mythical America as you drive around the rural South. You see the basketball hoop in the front yard, and there's Mom in the kitchen making popcorn, and Pop is load- ing up the pick-up truck to take the kids hunting. It's a happy, contented picture, not of great wealth, but of quiet virtue.

Buchanan adores them for their com- plete lack of interest in the rest of the world, and they applaud him when he vows to cut off without a penny 'all those Third World regimes mainlining on Uncle Sam's welfare money'.

I suggested to him that even Southern- ers expected their commander-in-chief to know about international affairs. 'Listen, my friend, I've just come back from Missis- sippi, and over there when you talk about the West Bank, they think you mean Arkansas.'

The bad news for President Bush is not that Buchanan is doing well in the polls by consistently taking a third of the Republi- can vote in the primary contests. It is that Buchanan is having such fun out there in what he calls the 'big America' as opposed to the little, petty America that exists inside the Washington Beltway.

Buchanan knows he cannot win the nomination, but he can continue to humili- ate the President all the way through the party convention in Texas in August by saying things that traditionally win the White House for the Republicans.

Buchanan likes to say that America was a great country before it became a rich country. I suspect that Buchanan despises himself a little for the way he makes his living — about $500,000 a year — in Washington. Ile almost seems to think he was a good man, perhaps a better man, before he became a rich and famous TV personality. Perhaps the insurgent Buch- anan campaign against George Bush is a form of penance, albeit an enjoyable one.

Stephen Robinson is Washington Correspon- dent of the Daily Telegraph.