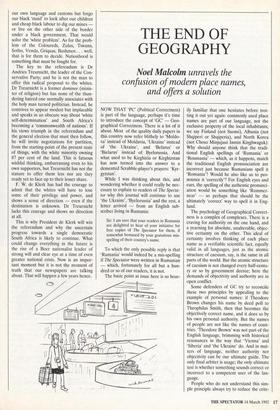 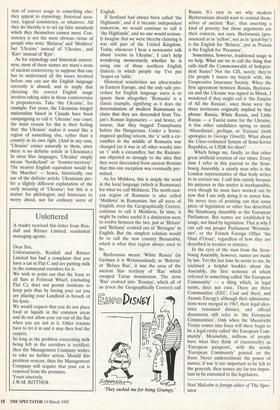 THE END OF GEOGRAPHY

confusion of modern place names, and offers a solution

NOW THAT 'PC' (Political Correctness) is part of the language, perhaps it's time to introduce the concept of `GC' — Geo- graphical Correctness. There is a lot of it about. Most of the quality daily papers in this country now refer blithely to 'Moldo- va' instead of Moldavia, 'Ukraine' instead of 'the Ukraine', and 'Belarus' or `Bielarus' instead of Byelorussia. And what used to be Kirghizia or Kirghizstan has now turned into the answer to a demented Scrabble-player's prayers: 'Kyr- gyzstan'.

While I was thinking about this, and wondering whether it could really be nec- essary to explain to readers of The Specta- tor why this journal will continue to use `the Ukraine', 'Byelorussia' and the rest, a letter arrived — from an English sub- scriber living in Rumania: Sir: I am sure that your readers in Romania are delighted to hear of your initiative for free copies of The Spectator for them, if somewhat bemused by your gratuitous mis- spelling of their country's name.

To which the only possible reply is that `Rumania' would indeed be a mis-spelling if The Spectator were written in Rumanian — which, fortunately for all but a hun- dred or so of our readers, it is not.

The basic point at issue here is so hoar- ily familiar that one hesitates before trot- ting it out yet again: commonly used place names are part of our language, not the exclusive property of the local inhabitants; we say Finland (not Suomi), Albania (not Shqiperi or Shqiperia), and North Korea (not Choso Minjujuui Inmin Kinghwaguk). Why should anyone think that the tradi- tional English spellings of 'Rumania' or `Roumania' — which, as it happens, match the traditional English pronunciation are incorrect just because Rumanians spell it `Romania'? Would he also like us to pro- nounce it 'correctly'? For English eyes and ears, the spelling of the authentic pronunci- ation would be something like `Rommer- near' — so perhaps that should be the ultimately 'correct' way to spell it in Eng- land.

The psychology of Geographical Correct- ness is a complex of complexes. There is a craving for authority on the one hand, and a yearning for absolute, unalterable, objec- tive certainty on the other. This ideal of certainty involves thinking of each place name as a verifiable scientific fact, equally valid in all languages, just as the atomic structure of caesium, say, is the same in all parts of the world. But the atomic structure of caesium is not changed every half-centu- ry or so by government decree; here the demands of objectivity and authority are in open conflict.

Some defenders of GC try to reconcile these two principles by appealing to the example of personal names: if Theodore Brown changes his name by deed poll to Theophilus Smith, then that becomes the objectively correct name, and it does so by his own personal authority. But the names of people are not like the names of coun- tries. 'Theodore Brown' was not part of the English language, brimming with historical resonances in the way that 'Vienna' and `Siberia' and 'the Ukraine' do. And in mat- ters of language, neither authority nor objectivity can be our ultimate guide. The only final arbiter is usage; the only ultimate test is whether something sounds correct or incorrect to a competent user of the lan- guage.

People who do not understand this sim- ple principle always try to reduce the crite- rion of correct usage to something else: they appeal to etymology, historical accu- racy, logical consistency, or whatever. All they do thereby is to set up false standards which they themselves cannot meet. Con- sistency is not the most obvious virtue of people who write 'Bielarus' and 'Moldova' but 'Ukraine' instead of `Ukraina , and `Kiev' instead of `Kyiv'.

As for etymology and historical correct- ness, most of these names are mare's nests of ancient controversy; to suppose that one has to understand all the issues involved before one can use the English language correctly is absurd, and to imply that choosing the correct English usage involves taking sides in those controversies is preposterous. Take 'the Ukraine', for example. For years, the Ukrainian émigré nationalists based in Canada have been campaigning to call it 'Ukraine' tout court; the main reason for this is their feeling that 'the Ukraine' makes it sound like a region of something else, rather than a country in its own right. (And in any case, `Ukraine' comes naturally to them, since there is no definite article in Ukrainian.) In most Slav languages, `Ukraina' simply means 'borderland' or 'frontier-territory'. The nearest English equivalent would be `the Marches' — hence, historically, our use of the definite article. Ukrainians pre- fer a slightly different explanation of the early meaning of `Ukraina'; but this is a matter for philologists and historians to worry about, not for ordinary users of

If Scotland had always been called 'the Highlands', and if it became independent tomorrow, we would continue to call it 'the Highlands', and no one would serious- ly imagine that we were thereby claiming it was still part of the United Kingdom. Today, whenever I hear a newscaster talk about 'events in Ukraine', I can't help wondering momentarily whether he is using one of those northern English dialects in which people say 'I've put 'teapot on 'table.'

Historical sensitivities are ultra-tender in Eastern Europe, and the only safe pro- cedure for English language users is to ignore them altogether. 'Romania' is a classic example, signifying as it does the determination of modern Rumanians to claim that they are descended from Tra- jan's Roman legionaries — and hence, of course, that they bagged Transylvania before the Hungarians. Under a Soviet- inspired spelling reform, the 'a' with a cir- cumflex in the middle of Romania was changed (as it was in all other words) into an T with a circumflex; but the Rumani- ans objected so strongly to the idea that they were descended from ancient Romins that this one exception was eventually per- mitted.

As for Moldova, this is simply the word in the local language (which is Rumanian) for what we call Moldavia. The north-east- ern region of Rumania is also called `Moldova' in Rumanian; but all users of English, even the Geographically Correct, continue to call it Moldavia. In time, it might be rather useful if a distinction were to evolve between the two, just as 'Britain' and 'Brittany' evolved out of 'Bretagne' in English. But the simplest solution would be to call the new country Bessarabia, which is what that region always used to be.

Byelorussia means 'White Russia' (in German it is Weissrussland); as 'Belorus' or 'Belaya Rus', it was the area of the ancient Slav territory of `Rus' which escaped Tartar domination. The term `Rus' evolved into 'Rossiya', which all of us (even the Geographically Correct) call 'They sacked me for being Grumpy.' Russia. It's easy to see why modern Byelorussians should want to remind them- selves of ancient `Rus', thus asserting a kind of priority; but those arguments are their concern, not ours. Byelorussia (pro- nounced as in 'yellow', not as in 'good-bye') is the English for 'Belarus', just as Prussia is the English for 'Preussen'.

Sometimes, however, traditional usage is no help. What are we to call the thing that calls itself the Commonwealth of Indepen- dent States? Not the CIS, surely; they're the people I insure my bicycle with, the Cooperative Insurance Society. When the first agreement between Russia, Byelorus- sia and the Ukraine was signed in Minsk, I wondered if they might call it 'the Empire of All the Russias', since those were the three territories originally implied by that phrase: Russia, White Russia, and Little Russia — a Tsarist name for the Ukraine. A few other candidates spring to mind: `Absurdistan', perhaps, or 'Eurasia' (with apologies to George Orwell). What about the Unco-ordinated System of Semi-Soviet Republics, or USSR for short?

Which brings me, finally, to that other great artificial creation of our times. Every time I refer in this journal to the Stras- bourg Assembly, a saintly man who is the London representative of that body writes in to correct me. I call him saintly because his patience in this matter is inexhaustible, even though he must have worked out by now that I am only doing it to annoy him. He never tires of pointing out that some piece of legislation or other has described the Strasbourg Assembly as the European Parliament. But names are established by usage, not fixed by legislation. That is why I can call our proper Parliament 'Westmin- ster', or the French Foreign Office 'the Quai d'Orsay', regardless of how they are described in treaties or statutes.

In the eyes of the man from the Stras- bourg Assembly, however, names are made by law. Yet the last time he wrote to me, he enclosed a helpful booklet about the Assembly, the first sentence of which referred to something called 'the European Community' — a thing which, in legal terms, does not exist. There are three Communities (EEC, Coal and Steel, and Atomic Energy); although their administra- tions were merged in 1967, their legal iden- tities remained distinct, and official documents still refer to 'the European Communities'. Only when the Maastricht Treaty comes into force will there begin to be a legal entity called 'the European Com- munity'. Meanwhile, millions of people have what they think of (incorrectly) as `European passports', with the words 'European Community' printed on the front. Never underestimate the power of names; if war is too important to be left to the generals, then names are far too impor- tant to be entrusted to the legislators.

Noel Malcolm is foreign editor of The Spec- tator