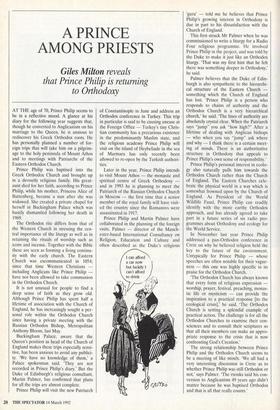 A PRINCE AMONG PRIESTS

that Prince Philip is returning to Orthodoxy

AT THE age of 70, Prince Philip seems to be in a reflective mood. A glance at his diary for the following year suggests that, though he converted to Anglicanism on his marriage to the Queen, he is anxious to rediscover his Greek Orthodox roots. He has personally planned a number of for- eign trips that will take him on a pilgrim- age to the holy peninsula of Mount Athos and to meetings with Patriarchs of the Eastern Orthodox Church.

Prince Philip was baptised into the Greek Orthodox Church and brought up in a devoutly religious family. His great- aunt died for her faith, according to Prince Philip, while his mother, Princess Alice of Battenberg, became a nun after she was widowed. She created a private chapel for herself in Buckingham Palace which was hastily dismantled following her death in 1969.

The Orthodox rite differs from that of the Western Church in stressing the cen- tral importance of the liturgy as well as in retaining the rituals of worship such as icons and incense. Together with the Bible these are seen as forming a living continu- ity with the early church. The Eastern Church was excommunicated in 1054; since that time Western Christians including Anglicans like Prince Philip have not been allowed to take communion in the Orthodox Church.

It is not unusual for people to find a deep sense of faith as they grow old. Although Prince Philip has spent half a lifetime of association with the Church of England, he has increasingly sought a per- sonal role within the Orthodox Church since having a private meeting with the Russian Orthodox Bishop, Metropolitan Anthony Bloom, last May.

Buckingham Palace, aware that the Queen's position as head of the Church of England makes these trips especially sensi- tive, has been anxious to avoid any publici- ty. 'We have no knowledge of them,' a Palace spokesman said. 'They are not recorded in Prince Philip's diary.' But the Duke of Edinburgh's religious consultant, Martin Palmer, has confirmed that plans for all the trips are almost complete.

Prince Philip will visit the new Patriarch of Constantinople in June and address an Orthodox conference in Turkey. This trip in particular is said to be causing unease at the Foreign Office — Turkey's tiny Chris- tian community has a precarious existence in the predominantly Muslim state, and the religious academy Prince Philip will visit on the island of Heybeliade in the sea of Marmara has only recently been allowed to re-open by the Turkish authori- ties.

Later in the year, Prince Philip intends to visit Mount Athos — the monastic and spiritual centre of Greek Orthodoxy and in 1993 he is planning to meet the Patriarch of the Russian Orthodox Church in Moscow — the first time that a senior member of the royal family will have visit- ed the country since the Romanovs were assassinated in 1917.

Prince Philip and Martin Palmer have collaborated in the planning of the foreign visits. Palmer — director of the Manch- ester-based International Consultancy on Religion, Education and Culture and often described as the Duke's religious

'guru' — told me he believes that .Prince Philip's growing interest in Orthodoxy is due in part to his dissatisfaction with the Church of England.

This first struck Mr Palmer when he was commissioned to write a liturgy for a Radio Four religious programme. He involved Prince Philip in the project, and was told by the Duke to make it just like an Orthodox liturgy. 'That was my first hint that he felt there was something deeper in Orthodoxy,' he said.

Palmer believes that the Duke of Edin- burgh is also sympathetic to the hierarchi- cal structure of the Eastern Church something which the Church of England has lost. 'Prince Philip is a person who responds to chains of authority and the Orthodox Church is a very hierarchical church,' he said. 'The lines of authority are absolutely crystal clear. When the Patriarch says "jump" you ask "how high?" After a lifetime of dealing with Anglican bishops — who when you say "jump" ask where and why — I think there is a certain meet- ing of minds. There is an authoritative structure in Orthodoxy that appeals to Prince Philip's own sense of responsibility.'

Prince Philip's personal interest in ecolo- gy also naturally pulls him towards the Orthodox Church rather than the Church of England. The Eastern Churches cele- brate the physical world in a way which is somewhat frowned upon by the Church of England. As President of the World Wildlife Fund, Prince Philip can readily identify with the more earthy Orthodox approach, and has already agreed to take part in a future series of six radio pro- grammes about Orthodoxy and ecology for the World Service.

In November last year Prince Philip addressed a pan-Orthodox conference in Crete on why he believed religion held the key to the future of the environment. Untypically for Prince Philip — whose speeches are often notable for their vague- ness — this one was highly specific in its praise for the Orthodox Church.

'The Orthodox Church has always known that every form of religious expression worship, prayer, festival, preaching, monas- tic life or mysticism — can provide the inspiration to a practical response [to the ecological crisis]; he said. 'The Orthodox Church is setting a splendid example of practical action. The challenge is for all the Orthodox Churches to examine their con- sciences and to consult their scriptures so that all their members can make an appro- priate response to the crisis that is now confronting God's Creation.'

The strong relationship between Prince Philip and the Orthodox Church seems to be a meeting of like minds. 'We all had a very interesting discussion in Crete as to whether Prince Philip was still Orthodox or not,' says Palmer. 'The monks said his con- version to Anglicanism 49 years ago didn't matter because he was baptised Orthodox and that is all that really counts.'