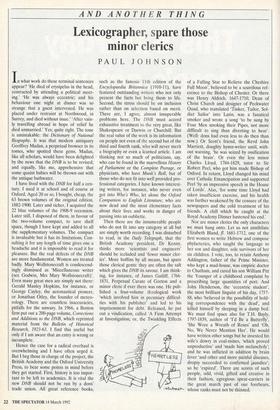 In what work do these terminal sentences appear? 'He died of erysipelas in the head, contracted by attending a political meet- ing.' He was always eccentric; and his behaviour one night at dinner was so strange that a guest intervened. He was placed under restraint at Northwood, in Surrey, and died without issue.' After vain- ly travelling abroad in hope of relief he died unmarried.' Yes; quite right. The tone is umistakable: the Dictionary of National Biography. It was that modern antiquary Geoffrey Madan, a perpetual browser in its tomes, who spotted these gems. Madan, like all scholars, would have been delighted by the news that the DNB is to be revised; and equally, like me, apprehensive that some quaint babies will be thrown out with the antique bathwater.

I have lived with the DNB for half a cen- tury. I used it at school and of course at Oxford. Aged 20 or so, I bought, cheap, the 63 brown volumes of the original edition, 1882-1900. Later and richer, I acquired the 22 blue volumes of the 1908-9 recension. Later still, I disposed of them, in favour of the two-volume compact, to save shelf space, though I have kept and added to all the supplementary volumes. The compact is invaluable but it has its limitations. Con- sulting it for any length of time gives one a headache and it is impossible to read it for pleasure. But the real defects of the DNB are more fundamental. Women are treated badly. Mary Wollstonecraft is condescend- ingly dismissed as `Miscellaneous writer (see Godwin, Mrs Mary Wollstonecraft)'. Even many great men are simply not there: Gerald Manley Hopkins, for instance, or George Cayley, the aeronautical pioneer, or Jonathan Otley, the founder of meteo- rology. There are countless inaccuracies, pitfalls for the unwary. In 1966, a Boston firm put out a 200-page volume, Corrections and Additions to the DNB, which reprinted material from the Bulletin of Historical Research, 1923-63. I find this useful but only if I am aware that an entry is wrong or incomplete.

Hence the case for a radical overhaul is overwhelming and I have often urged it. But I beg those in charge of the project, the British Academy and the Oxford University Press, to bear some points in mind before they get started. First, history is too impor- tant to be left to academics. It is vital the new DNB should not be run by a dons' trade union. All great reference books, such as the famous 1 1 th edition of the Encyclopaedia Britannica (1910-11), have featured outstanding writers who not only present the facts but bring them to life. Second, the stress should be on inclusion rather than on selection based on merit. There are, I agree, almost insuperable problems here. The DNB must accord exhaustive treatment to the very great, like Shakespeare or Darwin or Churchill. But the real value of the work is its information on people not even of the second but of the third and fourth rank, who will never merit a biography or even a learned article. I am thinking not so much of politicians, say, who can be found in the marvellous History of Parliament or the Complete Peerage, or physicians, who have Munk's Roll, but of those who do not fit into well provided pro- fessional categories. I have known interest- ing writers, for instance, who never even got into Who's Who, let alone the Oxford Companion to English Literature, who are now dead and the most elementary facts about their lives and works in danger of passing into an oubliette.

Then there are the innumerable people who do not fit into any category at all but are simply worth recording. I was disturbed to read, in the Daily Telegraph, that the British Academy president, Dr Kenny, thinks more `scientists and engineers' should be ir.cluded and `fewer minor cler- ics'. More boffins by all means, but spare those clerical gents: they are often the salt which gives the DNB its savour. I am think- ing, for instance, of James Gatliff, 1766- 1831, Perpetual Curate of Gorton and a minor cleric if ever there was one. He pub- lished a four-volume theological work `which involved him in pecuniary difficul- ties with his publisher' and led to his imprisonment for debt. Released, he put out a vindication, called 'A Firm Attempt at Investigation; or, the Twinkling Effects of a Falling Star to Relieve the Cheshire Full Moon', believed to be a scurrilous ref- erence to the Bishop of Chester. Or there was Henry Aldrich, 1647-1710, Dean of Christ Church and designer of Peckwater Quad, who translated 'Tinker, Tailor, Sol- dier Sailor' into Latin, was a fanatical smoker and wrote a song `to be sung by Four Men smoking their Pipes, not more difficult to sing than diverting to hear'. (Well: dons had even less to do then than now.) Or Scott's friend, the Revd John Marriott, doughty hymn-writer until, with- out warning, `he was seized by ossification of the brain'. Or even the less minor Charles Lloyd, 1784-1829, tutor to Sir Robert Peel, who got him made Bishop of Oxford. In return, Lloyd changed his mind over Catholic Emancipation and supported Peel 'by an impressive speech in the House of Lords'. Alas, `for some time Lloyd had taken insufficient exercise, and his health was further weakened by the censure of the newspapers and the cold treatment of his friends. A chill which he caught at the Royal Academy Dinner hastened his end.'

Nor are minor clerics the only characters we must hang onto. Let us not annihilate Elizabeth Bland, ft 1681-1712, one of the first women to write Hebrew and compose phylacteries, who taught the language to her son and daughter, sole survivors of her six children. I vote, too, to retain Anthony Addington, father of the Prime Minister, who kept a mad-house, was empiric doctor to Chatham, and cured his son William Pitt the Younger of a childhood complaint by prescribing large quantities of port. And John Henderson, the 'eccentric student', the most brilliant linguist of his day, 1757- 88, who `believed in the possibility of hold- ing correspondence with the dead', and killed himself by sleeping in a damp bed. We must find space also for T.H. Bayly, 1797-1839, author of `I'd Be a Butterfly', `She Wore a Wreath of Roses' and 'Oh, No, We Never Mention Her'. He would have written other songs but he invested his wife's dowry in coal-mines, 'which proved unproductive' and `made him melancholy'; and he was inflicted in addition by brain fever `and other and more painful diseases, dropsy succeeded to confirmed jaundice'; so he `expired'. There are scores of such people, odd, vivid, gifted and creative in their fashion, egregious spear-carriers in the great march past of our forebears, "14N-3,,r-0-- whose ranks must not be thinned.