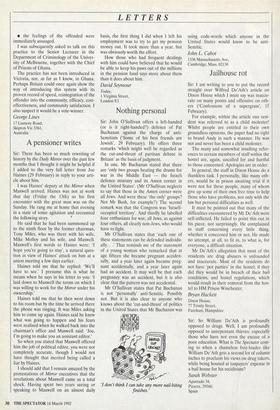 Sir: There has been so much rewriting of history by the Daily Mirror over the past few months that I thought it might be helpful if I added to the very full letter from Joe Haines (29 February) in reply to your arti- cle about him.

I was Haines' deputy at the Mirror when Maxwell arrived. Haines was not at work that day (Friday the 13th) so his first encounter with the great man was on the Sunday. He rang me at home that evening in a state of some agitation and recounted the following story.

He said that he had been summoned up to the ninth floor by the former chairman, Tony Miles, who was there with his wife, Mike Molloy and his wife, and Maxwell. Maxwell's first words to Haines were: 'I hope you're going to stay', a natural ques- tion in view of Haines' attack on him at a union meeting a few days earlier.

Haines told me that he replied: 'We'll have to see.' I presume this is what he means when he says in his letter to you: 'I laid down to Maxwell the terms on which I was willing to work for the Mirror under his ownership.'

Haines told me that he then went down to his room but by the time he arrived there the phone was ringing. It was Miles asking him to come up again. Haines said he knew what was going to happen and his fears were realised when he walked back into the chairman's office and Maxwell said: 'Joe, I'm going to make you an assistant editor.'

So when you stated that Maxwell offered him the job of political editor, you were not completely accurate, though I would not have thought that merited being called a liar by Haines.

I should add that I remain amazed by the protestations of Mirror executives that the revelations about Maxwell came as a total shock. Having spent two years seeing or speaking to Maxwell on an almost daily basis, the first thing I did when I left his employment was to try to get my pension money out. It took more than a year, but was obviously worth the effort.

How those who had frequent dealings with him could have believed that he would be able to keep his paws out of the millions in the pension fund says more about them than it does about him.