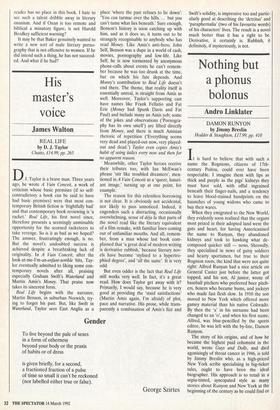 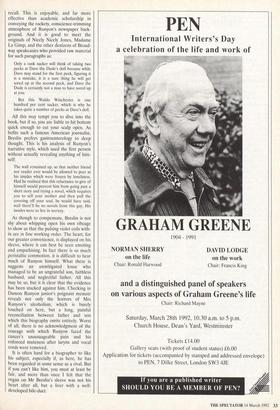 DAMON RUNYON by Jimmy Breslin Hodder & Stoughton, f17.99, pp. 410 It is hard to believe that with such a name the Rognions, citizens of 17th- century Poitou, could ever have been respectable. I imagine them with lips as thick and purple as the pigs' kidneys they must have sold, with offal ingrained beneath their finger-nails, and a tendency to leave blood-stained handprints on the haunches of young widows who came to buy their wares.

When they emigrated to the New World, they evidently soon realised that the organs most prized in their adopted land were the guts and heart, for having Americanised the name to Runyan, they abandoned kidneys and took to hawking what de- composed quicker still — news. Shrewdly, they specialised in news of gutsy soldiers and hearty sportsmen, but true to their Rognion roots, the kind that were not quite right: Alfred Runyan had a nice article on General Custer just before the latter got topped, and his son, Al junior, wrote of baseball pitchers who preferred beer pitch- ers, boxers who became bums, and jockeys who made fast flesh slow. In 1910 the son moved to New York which offered more gamey material than his native Colorado. By then the 'a' in his surname had been changed to an 'o', and when his first name, Alfred, was blue-pencilled by the sports editor, he was left with the by-line, Damon Runyon.

The story of his origins, and of how he became the highest paid columnist in the world, wrote Guys and Dolls, and died agonisingly of throat cancer in 1946, is told by Jimmy Breslin who, as a high-priced New York scribe specialising in big-ticker tales, ought to have been the ideal biographer. His approach is to retail in a sepia-tinted, syncopated style as many stories about Runyon and New York at the beginning of the century as he could find or

recall. This is enjoyable, and far more effective than academic scholarship in conveying the rackety, conscience-trimming atmosphere of Runyon's newspaper back- ground. And it is good to meet the originals of Nicely Nicely Jones, Madame La Gimp, and the other denizens of Broad- way speakeasies who provided raw material for such paragraphs as:

Only a rank sucker will think of taking two peeks at Dave the Dude's doll because while Dave may stand for the first peck, figuring it is a mistake, it is a sure thing he will get sored up at the second peek, and Dave the Dude is certainly not a man to have sored up at you.

But this Waldo Winchester is one hundred per cent sucker, which is why he takes quite a number of peeks at Dave's doll.

All this may tempt you to dive into the book, but if so, you are liable to hit bottom quick enough to cut your scalp open. As befits such a famous American journalist, Breslin prefers gastroenterology to deep thought. This is his analysis of Runyon's narrative style, which used the first person without actually revealing anything of him- self:

The wall remained up, so that neither friend nor reader ever would be allowed to peer at his insides which were frozen by loneliness. Had he realised that this reluctance to give oi himself would prevent him from going past a short story and trying a novel, which requires you to sell your mother and then pull the covering off your soul, he would have said. well there'll be no novels from this guy. His insides were to live in secrecy.

As though to compensate, Breslin is not shy about whipping open his own ribcage to show us that the pulsing violet coils with- in are in fine working order. The heart, for our greater convenience, is displayed on his sleeve, where it can best be seen emoting and empathising. In fact there is so much peristaltic commotion, it is difficult to hear much of Runyon himself. What there is suggests an unmitigated louse who managed to be an ungrateful son, faithless husband, and neglectful father. All this may be so, but it is clear that the evidence has been stacked against him. Checking in Damon Runyon junior's poignant memoir reveals not only the horrors of Mrs Runyon's alcoholism, which is barely touched on here, but a long, painful reconciliation between father and son which this biography omits entirely. Worst of all, there is no acknowledgment of the courage with which Runyon faced the cancer's unassuageable pain and his enforced muteness after larynx and vocal cords were removed.

It is often hard for a biographer to like his subject, especially if, as here, he has been regarded in some sense as a rival. But If you can't like him, you must at least be fair, and more than once I felt that the organ on Mr Breslin's sleeve was not his heart after all, but a liver with a well- developed bile-duct.