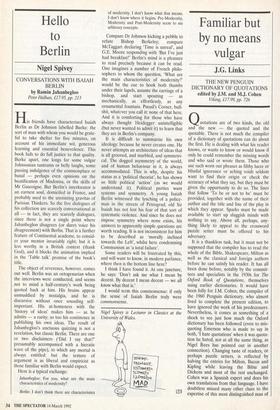 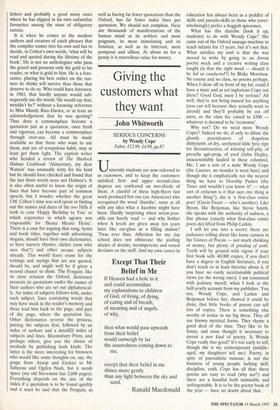 Familiar but by no means vulgar

THE NEW PENGUIN DICTIONARY OF QUOTATIONS edited by J.M. and M.J. Cohen Viking, £17.99, pp. 726 Quotations are of two kinds, the old and the new — the quoted and the quotable. There is not much the compiler of a dictionary of quotations can do about the first. He is dealing with what his reader knows, or wants to know or would know if only he could remember the missing words and who said or wrote them. Those who use such worn out phrases as filthy lucre or blissful ignorance or aching voids seldom want to find their origin or check the accuracy of what they say, but they must be given the opportunity to do so. The lines that follow 'To be or not to be' must be provided, together with the name of their author and the title and line of the play in which they appear. Sparks must be made available to start up sluggish minds with nothing to say. Above all, perhaps, any- thing likely to appeal to the crossword puzzle setter must be offered to his adversary.

It is a thankless task, but it must not be supposed that the compiler has to read the whole of the Bible, Shakespeare, Milton as well as the classical and foreign authors before he can satisfy his reader. It has all been done before, notably by the commit- tees and specialists in the 1930s for The Oxford Book of Quotations, themselves using earlier dictionaries. It would have been folly for J.M. Cohen, the compiler of the 1960 Penguin dictionary, who almost lived to complete the present edition, to have ignored the work of his predecessors. Nevertheless, it comes as something of a shock to see just how much the Oxford dictionary has been followed (even to mis- quoting Emerson who is made to say in both, 'I hate quotations' when it was quota- tion he, hated, not at all the same thing, as Nigel Rees has pointed out in another connection). Changing taste of readers, or perhaps puzzle setters, is reflected by halving the entries for Milton, Bacon and Kipling while leaving the Bible and Dickens and most of the rest unchanged. Cohen was a Spanish expert and does his own translations from that language. I have doubtless missed many other clues to the expertise of this most distinguished man of

letters and probably a good many cases where he has slipped in his own unfamiliar favourites among the mass of obligatory entries.

It is when he comes to the modern authors and creators of catch phrases that the compiler comes into his.own and has to decide, in Cohen's own words, 'what will be read and quoted during the lifetime of the book'. He is not an anthologiser who pans the gravel and presents only the gold to his reader, or what is gold to him. He is a fore- caster, placing his bets rather on the run- ners he thinks will survive than those that deserve to do so. Who could have foreseen, in 1963, that hardly anyone would sub- sequently use the words 'He would say that, wouldn't he?' without a knowing reference to Miss Mandy Rice-Davies, or at least an acknowledgement that he was quoting? Thus does a commonplace become a quotation just as a quotation, once fresh and vigorous, can become a commonplace through over-use. All must be made available so that those who want to use them, and are of scrupulous habit, may at least get them right. The caption writer who headed a review of The Sherlock Holmes Cookbook 'Alimentary, my dear Watson' was unusually witty for his kind but he should have checked and found that the last three words were not Holmes's. It is also often useful to know the origin of lines that have become part of common speech, but I wonder whether the great J.M. Cohen's time was well spent in finding out the names and dates of the two Hills it took to coin 'Happy Birthday to You' or which copywriter in which agency was responsible for `Beanz Meanz Heinz'. There is a case for arguing that song, hymn and book titles, together with advertising slogans, should have their own dictionaries, as have nursery rhymes, clichés (now who uses that?) and other arcane subjects already. This would leave room for the writings and sayings that are not quoted, should be, and might well be if given a second chance to shine. The Penguin, like its close relation the Oxford, dictionary presents its quotations under the names of their authors who are set out alphabetical- ly. An index of subjects follows with, under each subject, lines containing words that may have stuck in the reader's memory and these lead him back to the page, and part of the page, where the quotation lies. Other dictionaries reverse the process, putting the subjects first, followed by an index of authors and a detaildd index of subjects and lines. Bloomsbury Press, and perhaps others, give you the choice of methods by publishing both kinds. The latter is the more interesting for browsers who would like some thoughts on, say, the grape from Aesop and Ezekiel to Mr Salteena and Ogden Nash, but it needs space (my old Stevenson has 2,600 pages). Everything depends on the size of the index if a quotation is to be found quickly and it must be said that the Penguin, as

well as having far fewer quotations than the Oxford, has far fewer index lines per quotation. We should not complain. Here are thousands of manifestations of the human mind at its noblest and most poignant, its most stimulating and its funniest, as well as its bitterest, most pompous and silliest. At about six for a penny it is marvellous value for money.