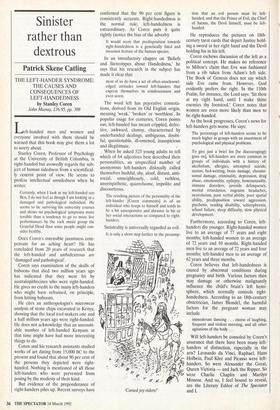 Sinister rather than dextrous

THE LEFT-HANDER SYNDROME: THE CAUSES AND CONSEQUENCES OF LEFT-HANDEDNESS by Stanley Coren John Murray, £16.95, pp. 308 Left-handed men and women and everyone involved with them should be warned that this book may give them a lot to worry about.

Stanley Coren, Professor of Psychology at the University of British Columbia, is right-handed but avowedly regards the sub- ject of human sidedness from a scientifical- ly centrist point of view. He seems to profess intellectual unsidedness when he writes:

Certainly, when I look at my left-handed son Ben, I do not feel as though I am looking at a damaged and pathological individual. He seems to be surviving his university courses and shows no psychological symptoms more terrible than a tendency to go to more live performances by the rock music group the Grateful Dead than some people might con- sider healthy.

Does Coren's ostensible jauntiness com- pensate for an aching heart? He has concluded from 20 years of research that the left-handed and ambidextrous are `damaged and pathological'.

Coren says examination of the skulls of baboons that died two million years ago has indicated that they were hit by australopithecines who were right-handed. He gives no credit to the many left-handers who might have refrained, on principle, from hitting baboons.

He cites an anthropologist's microwear analysis of stone chips excavated in Kenya, showing that the local tool-makers one and a half million years ago were right-handed. He does not acknowledge that an uncount- able number of left-handed Kenyans at that time might have had more interesting things to do.

Coren and his research assistants studied works of art dating from 15,000 BC to the present and found that about 90 per cent of the persons they depicted were right- handed. Nothing is mentioned of all those left-handers who were prevented from posing by the modesty of their kind.

But evidence of the preponderance of right-handers piles up. Recent surveys have

confirmed that the 90 per cent figure is consistently accurate. Right-handedness is the normal rule; left-handedness is extraordinary. As Coren puts it quite rightly (notice the bias of the adverb):

It would seem that predisposition towards right-handedness is a genetically fixed and invariant feature of the human species.

In an introductory chapter on 'Beliefs and Stereotypes about Handedness,' he says that his research in the subject has made it clear that

most of us do have a set of often-unacknowl- edged attitudes toward left-handers that express themselves in condescension and even scorn.

The resulting picture of the personality of the left-hander [Coren comments] is of an individual who keeps to himself and tends to he a hit unresponsive and abrasive in his or her social interactions as compared to right- handers.

Sinistrality is universally regarded as evil. It is only a short step further to the presump-

He reproduces the pictures on 18th- century tarot cards that depict Justice hold- ing a sword in her right hand and the Devil holding his in his left.

Coren eschews discussion of the left as a political concept. He makes no reference to Milton's claim that Eve was fashioned from a rib taken from Adam's left side. The Book of Genesis does not say which side Eve came from. However, God evidently prefers the right. In the 110th Psalm, for instance, the Lord says: 'Sit thou at my right hand, until I make thine enemies thy footstool.' Coren notes that women are even more likely than men to be right-handed.

As the book progresses, Coren's news for left-handers gets worse. He says:

The percentage of left-handers seems to be much higher in groups with an assortment of psychological and physical problems.

Coren believes that left-handedness is caused by abnormal conditions during pregnancy and birth. Various factors then may damage or otherwise malignantly influence the child's brain's left hemi- sphere, which normally controls right- handedness. According to an 18th-century obstetrician, James Blonde!, the harmful factors for the pregnant woman may include

immoderate dancing . . . excess of laughing, frequent and violent sneezing, and all other agitations of the body ...

Will left-handers be consoled by Coren's assurance that there have been many left- handers of distinction, especially in the arts? Leonardo da Vinci, Raphael, Hans Holbein, Paul Klee and Picasso were left- handers. So were Alexander the Great, Queen Victbria — and Jack the Ripper. So ix were Charlie Chaplin and Marilyn Monroe. And so, I feel bound to reveal,

are the Literary Editor of The Spectator