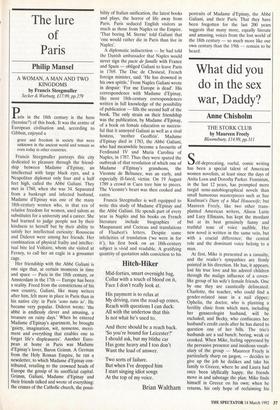 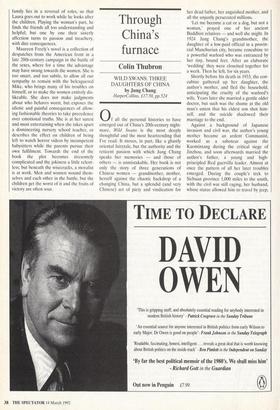 do in the sex

THE STORK CLUB by Maureen Freely Bloomsbury, £14.99, pp.311 Self-deprecating, rueful, comic writing has been a special talent of American women novelists, at least since the days of Anita Loos and Dorothy Parker. Feminism, in the last 12 years, has prompted more turgid semi-autobiographical novels than small humorous masterpieces such as Sue Kaufman's Diary of a Mad Housewife; but Maureen Freely, like two other trans- planted American writers, Alison Lurie and Lucy Ellmann, has kept the mordant but at its best genuinely funny and truthful tone of voice audible. Her new novel is written in the same vein, but with a crucial difference; the central role and the dominant voice belorig to a man.

At first, Mike is presented as a casualty, and the reader's sympathies are firmly pointed in his direction. He has, it appears, lost his true love and his adored children through the malign influence of a coven- like group of his wife's female friends. One by one they are caustically delineated: Charlotte, the teacher, who could find a gender-related issue in a nail clipper; Ophelia, the doctor, who is planning a fertility clinic from which men, including her gynaecologist husband, will be excluded; and Becky, who confiscates her husband's credit cards after he has dared to question one of her bills. The trio's husbands are a sad bunch: boring, weak or crooked. When Mike, feeling oppressed by the pervasive presence and insidious vocab- ulary of the group — Maureen Freely is particularly sharp on jargon, — decides to give up the job he dislikes and take his family to Greece, where he and Laura had once been idyllically happy, the friends move in and sabotage the plan. Mike finds himself in Greece on his own; when he returns, his only hope of reclaiming his family lies in a reversal of roles, so that Laura goes out to work while he looks after the children. Playing the woman's part, he finds the friends all too understanding and helpful; but one by one their sisterly affection turns to passion and treachery, with dire consequences.

Maureen Freely's novel is a collection of despatches from the American front in a late 20th-century campaign in the battle of the sexes, where for a time the advantage may have swung towards the women. She is too smart, and too subtle, to allow all our sympathy to remain with the beleaguered Mike, who brings many of his troubles on himself, or to make the women entirely dis- likeable. She does not make judgments about who behaves worst, but exposes the idiotic and painful consequences of allow- ing fashionable theories to take precedence over emotional truths. She is at her surest and most entertaining when she takes apart a domineering nursery school teacher, or describes the effect on children of being left to watch horror videos by incompetent babysitters while the parents pursue their own fulfilment. Towards the end of the book the plot becomes tiresomely complicated and the jokiness a little relent- less; but beneath the wisecracks, a moralist is at work. Men and women wound them- selves and each other in the battle, but the children get the worst of it and the fruits of victory are often sour.