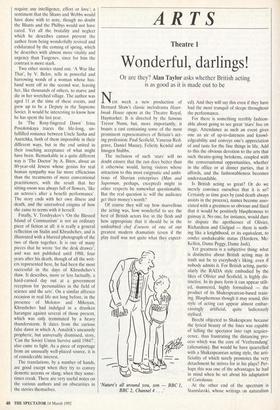 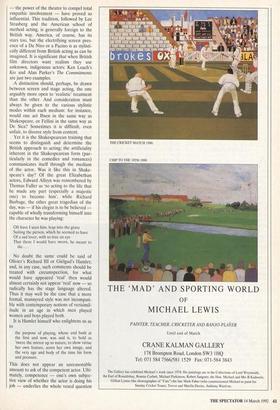 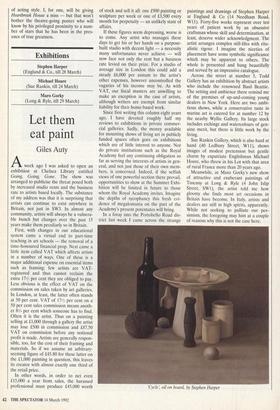 Next week a new production of Bernard Shaw's classic melodrama Heart- break House opens at the Theatre Royal, Haymarket. It is directed by the famous Trevor Nunn, but, more importantly, it boasts a cast containing some of the most prominent representatives of Britain's act- ing profession: Paul Scofield, Vanessa Red- grave, Daniel Massey, Felicity Kendal and Imogen Stubbs.

The inclusion of such 'stars' will no doubt ensure that the run does better than it otherwise would, luring visitors whose attraction to this most enigmatic and ambi- tious of Shavian enterprises (Man and Superman, perhaps, excepted) might in other respects be somewhat questionable. But the real question is: will the audience get their money's worth?

Of course they will say how marvellous the acting was, how wonderful to see the best of British actors live in the flesh and how appropriate that it should be in the undoubted chef d'oeuvre of one of our greatest modern dramatists (even if the play itself was not quite what they expect-

ed). And they will say this even if they have had the most tranquil of sleeps throughout the performance.

For there is something terribly fashion- able about going to see great 'stars' live on stage. Attendance as such an event gives one an air of up-to-dateness and knowl- edgeability and conveys one's appreciation of and taste for the fine things in life. Add to this the obvious devotion to the arts that such theatre-going betokens, coupled with the conversational opportunities, whether in the office or at dinner parties, that it affords, and the fashionableness becomes understandable.

Is British acting so great? Or do we merely convince ourselves that it is so?

Certainly as time goes by (and death always assists in the process), names become asso- ciated with a greatness so obvious and fixed that it would be positively blasphemous to gainsay it. No one, for instance, would dare to dispute the apotheoses of Olivier, Richardson and Gielgud — there is noth- ing like a knighthood, or its equivalent, to confer unshakeable status (Hordern, Mc- Kellen, Dame Peggy, Dame Judi).

Yet greatness is a subjective thing: what is distinctive about British acting may in truth not be to everybody's liking, even if nobody admits it. For British acting, partic- ularly the RADA style embodied by the likes of Olivier and Scofield, is highly dis- tinctive. In its pure form it can appear stilt- ed, mannered, highly formalised — the product of its Shakespearean-based train- ing. Blasphemous though it may sound, this style of acting can appear almost embar- rassingly artificial, quite ludicrously stylised.

Brecht objected to Shakespeare because the lyrical beauty of the lines was capable of lulling the spectator into rapt acquies- cence, thus frustrating the distancing pro- cess which was the core of 'Verfremdung' (alienation). But would he have quarrelled with a Shakespearean acting style, the arti- ficiality of which surely promotes the very detachment he strives for in his plays? Per- haps this was one of the advantages he had in mind when he set about his adaptation of Coriolanus.

At the other end of the spectrum is Stanislayski, whose writings on naturalism

— the power of the theatre to compel total empathic involvement — have proved so influential. This tradition, followed by Lee Strasberg and the American school of method acting, is generally foreign to the British way. America, of course, has its stars too, but the electrifying screen pres- ence of a De Niro or a Pacino is as stylisti- cally different from British acting as can be imagined. It is significant that when British film directors want realism they use unknown, indigenous actors: Ken Loach's Kes and Alan Parker's The Commitments are just two examples.

A distinction should, perhaps, be drawn between screen and stage acting, the one arguably more open to `realistic' treatment than the other. And consideration must always be given to the various stylistic modes within each medium: for instance, would one act Ibsen in the same way as Shakespeare, or Fellini in the same way as De Sica? Sometimes it is difficult, even unfair, to divorce style from content.

Yet it is the Shakespearean training that seems to distinguish and determine the British approach to acting; the artificiality inherent in the Shakespearean form (par- ticularly in the comedies and romances) communicates itself through the medium of the actor. Was it like this in Shake- speare's day? Of the great Elizabethan actors, Edward Alleyn was remembered by Thomas Fuller as `so acting to the life that he made any part (especially a majestic one) to become him', while Richard Burbage, the other great tragedian of the day, was — if his elegist is to be believed capable of wholly transforming himself into the character he was playing:

Oft have 1 seen him, leap into the grave Suiting the person, which he seemed to have Of a sad lover, with so true an eye That there 1 would have sworn, he meant to die....

No doubt the same could be said of Olivier's Richard III or Gielgud's Hamlet; and, in any case, such comments should be treated with circumspection, for what would have appeared 'real' then would almost certainly not appear 'real' now — so radically has the stage language altered. Thus it may well be the case that a more formal, mannered style was not incompati- ble with contemporary notions of verisimil- itude in an age in which men played women and boys played both.

It is Hamlet himself who enlightens us as to

the purpose of playing, whose end both at the first and now, was and is, to hold as 'twere the mirror up to nature; to show virtue her own feature, scorn her own image, and the very age and body of the time his form and pressure.

This does not appear an unreasonable amount to ask of the competent actor. Ulti- mately, competence — one's own subjec- tive view of whether the actor is doing his job — underlies the whole vexed question

of acting style. I, for one, will be giving Heartbreak House a miss — but that won't bother the theatre-going punter who will know by his privileged proximity to a num- ber of stars that he has been in the pres- ence of true greatness.