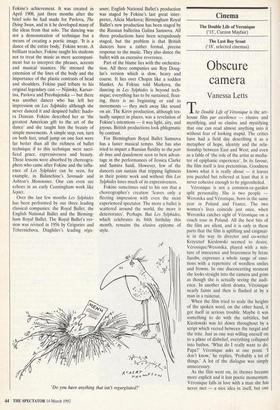 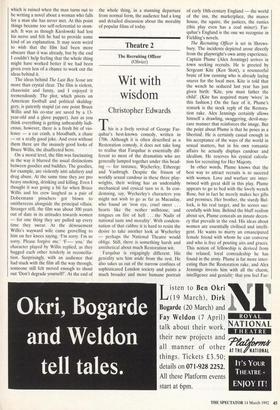 The Double Life of Veronique is the art- house film par excellence — elusive and mystifying, and so elusive and mystifying that one can read almost anything into it without fear of looking stupid. The critics have had a field day describing it as a metaphor of hope, identity and the rela- tionship between East and West; and even as a fable of 'the role of the artist as media- • for of epiphanic experience'. In its favour, the film itself is less pretentious. Goodness knows what it is really about — it leaves you puzzled but relieved at least that it is never cohesive enough to be pigeonholed.

Veronique is not a common-or-garden split personality. She is two people Weronika and Veronique, born in the same year in Poland and France. The two women's lives coincide just once, when Weronika catches sight of Veronique on a coach tour in Poland. All the best bits of the film are silent, and it is only in these parts that the film is uplifting and enigmat- ic in the way its director and co-writer Krzysztof Kieslowski seemed to desire. Veronique/Weronika, played with a mix- ture of innocence and brazenness by Irene Jacobs, expresses a whole range of emo- tions with a repertoire of wordless smiles and frowns. In one disconcerting moment she looks straight into the camera and grins as though she is actually seeing the audi- ence. In another silent drama, Verohique nearly faints and then is flashed at by a man in a raincoat.

When the film tried to scale the heights of the spoken word, on the other hand, it got itself in serious trouble. Maybe it was something to do with the subtitles, but Kieslowski was let down throughout by a script which veered between the turgid and the trite. Just as one was willing oneself on to a plane of disbelief, everything collapsed into bathos. 'What do I really want to do, Papa?' Veronique asks at one point. don't know,' he replies, 'Probably a lot of things.' A lot of the dialogue was simply unnecessary.

As the film went on, its themes became more explicit and it lost poetic momentum. Veronique falls in love with a man she has never met — a nice idea in ;tself, but one which is ruined when the man turns out to be writing a novel about a woman who falls for a man she has never met. At this point things became too self-referential to stom- ach. It was as though Kieslowski had lost his nerve and felt he had to provide some kind of an explanation. It may seem weird to wish that the film had been more obscure than it was already, but by the end I couldn't help feeling that the whole thing might have worked better if we had been given even less of a chance to work out the ideas behind it.

The ideas behind The Last Boy Scout are more than crystal clear. The film is violent, chauvinist and funny, and I enjoyed it tremendously. The plot, which pivots on American football and political skuldug- gery, is patently stupid (at one point Bruce Willis and his co-star are saved by a 13- year-old and a glove puppet). Just as you think everything is getting unbearably ludi- crous, however, there is a fresh bit of vio- lence — a car crash, a bloodbath, a chase — or a really good joke. And even without them there are the insanely good looks of Bruce Willis, the disaffected hero.

On a moral level, the film was fascinating in the way it blurred the usual distinctions between goodies and baddies. The goodies, for example, are violently anti adultery and drug abuse. At the same time they are pro heavy smoking, drinking and killing. Even I thought it was going a bit far when Bruce Willis and his crew laughed as a pair of Dobermann pinschers got blown to smithereens alongside the principal villain. Stranger still, the film was about 300 years out of date in its attitudes towards women — for one thing they are pulled up every time they swear. At the denouement Willis's wayward wife came grovelling to him on her knees saying, 'I'm sorry. I'm so sorry. Please forgive me.' F— you,' the character played by Willis replied, as they hugged each other tenderly in reconcilia- tion. Surprisingly, with an audience that had stuck with the film all the way through, someone still felt moved enough to shout out 'Don't degrade yourself!'. At the end of the whole thing, in a stunning departure from normal form, the audience had a long and detailed discussion about the morality of popular films of today.