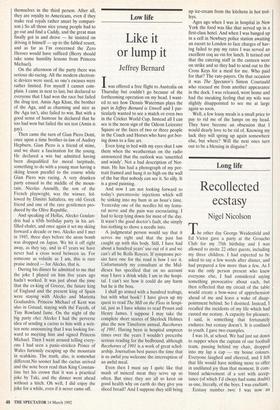 Thursday but couldn't go because of the forthcoming operation on my head. I want-

ed to see how Dennis Waterman plays the part in Jeffrey Bernard is Unwell and I par- ticularly wanted to see a match or even two in the Cricket World Cup. Instead all I can see is the neon sign of the Odeon Leicester Square or the faces of two or three people in the Coach and Horses who have got bor- ing down to a fine art.

Even lying in bed with my eyes shut I saw them when the weatherman on the radio announced that the outlook was 'unsettled and windy'. Not a bad description of Nor- man. He has had a photograph of my por- trait framed and hung it so high on the wall of the bar that nobody can see it. So silly. It is a good painting.

And now I am not looking forward to today's parentrovite injections which will be sinking into my bum in an hour's time.

Yesterday one of the needles hit my femu- ral nerve and the pain was excruciating. I had to keep lying down for most of the day. It wasn't the good doctor's fault, she simply has nothing to shove a needle into.

A judgmental person would say that it serves me right and that the past has caught up with this body. Still, I have had about a hundred years' use out of it and we can't all be Rolls Royces. If symptoms per- sist have one for the road is how I see it.

Unfortunately my consultant at the Mid- dlesex has specified that on no account may I have a drink while I am in the hospi- tal. I can't see how it could do any harm but he is the boss.

I shall go armed with a hundred teabags, but with what book? I have given up my

quest to read The Mill on the Floss in hospi-

tal, just as I have whims to read Proust and Henry James. I suppose I may take the complete short stories of Sherlock Holmes

plus the new Timeform annual, Racehorses of 1991. Having been in hospital umpteen times over the years I wouldn't prescribe serious reading for the bedbound, although Racehorses of 1991 is a work of great schol- arship. Journalism best passes the time that is so awful you welcome the interruption of an awful meal.

Even then I must say I quite like that mush of minced meat they serve up so often. But since they are all so keen on good health why on earth do they give you sliced bread? And I suppose they still bring up ice-cream from the kitchens in hot trol- leys.

Ages ago when I was in hospital in New York the food was like that served up in a first-class hotel. And when I was banged up in a cell in Newbury police station awaiting an escort to London to face charges of hav- ing failed to pay my rates I was served an excellent coq au yin for lunch. It turned out that the catering staff in the canteen were on strike and so they had to send out to the Cross Keys for a meal for me. Who paid for that? The rate-payers. On that occasion it was The Spectator's Simon Courtauld who rescued me from another appearance in the dock. I was released, went home and had the sneaking feeling that my wife was slightly disappointed to see me at large again so soon.

Well, a few lousy meals is a small price to pay to rid me of the lumps on my head. They have become an obsession that I would dearly love to be rid of. Knowing my luck they will spring up again somewhere else, but where? Will the next ones turn out to be a blessing in disguise?