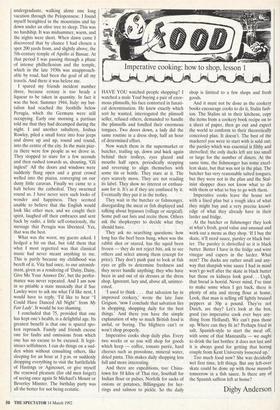 Imperative cooking: how to shop, lesson 1 HAVE YOU watched

people shopping? I watched a male Youf buying a pair of enor- mous plimsolls, his face contorted in fanati- cal determination. He knew exactly which sort he wanted, interrogated the plimsoll seller, refused others, demanded to handle the plimsolls and fondled their enormous tongues. Two doors down, a lady did the same routine in a dress shop, half an hour of determined effort.

Now watch them in the supermarket or butcher, trailing up, down and hack again behind their trolleys, eyes glazed and mouths half open, periodically stopping and reversing to align themselves with some tin or bottle. They stare at it. The eyes scarcely move. They are not reading its label. They show no interest or enthusi- asm for it. It's as if they are confused by it. Eventually they put it in the trolley.

They wait in the butcher or fishmonger, disregarding the meat or fish displayed and talking about bypasses (village or surgical). Some pull out lists and recite them. Others ask the shopkeeper to decide what they should have.

They ask no searching questions: how long has the beef been hung, when was the rabbit shot or snared, has the squid been frozen — they do not reject bits, ask to see others and select among them (except for price). They don't push past to look at fish eyes or gills to determine freshness and they never handle anything; they who have been in and out of six dresses at the dress shop. Ignorant, lazy and, above all, uninter- ested.

`I used to think . . . that salvation lay in improved cookery,' wrote the late Jane Grigson, 'now I conclude that salvation lies in shopping, shopping daily for the best things.' And there you have the simple explanation of why so much British food is awful, or boring. The blighters can't or won't shop properly.

Imperative cooks shop daily plus. Every two weeks or so you will shop for goods which keep — coffee, tomato puree, hard cheeses such as provolone, mineral water, dried pasta. This makes daily shopping less full and more interesting.

And there are expeditions, too: China- town for 10 kilos of Thai rice, Southall for Indian flour or pulses, Norfolk for sacks of onions or potatoes, Billingsgate for her- rings and salmon to pickle. So the daily shop is limited to a few shops and fresh goods.

And it must not be done as the cookery books encourage cooks to do it, Stalin fash- ion. The Stalins sit in their kitchens, copy the. items from a cookery book recipe on to a sheet of paper, then go out and expect the world to conform to their theoretically conceived plan. It doesn't. The best of the mackerel you were to start with is sold out; the parsley which was essential is filthy and shrivelled; the only ducks left are too small or large for the number of diners. At the same time, the fishmonger has some excel- lent skate, but that was not in the plan. The butcher has very reasonable salted tongues, but they were not in the plan and the Stal- inist shopper does not know what to do with them or what to buy to go with them.

Imperative cooks leave the house not with a fixed plan but a rough idea of what they might buy and a very precise knowl- edge of what they already have in their larder and fridge.

At the butcher or fishmonger they look at what's fresh, good value and unusual and work out a menu as they shop. 'If I buy the skate, it'll need sauce, parsley or black but- ter. The parsley is shrivelled so it is black butter. Butter I have in the fridge and wine vinegar and capers in the larder. What next? The ducks are rather small and any- way that sharpish wine sauce I had in mind won't go well after the skate in black butter but those ox kidneys look good ... Urgh, that bread is horrid. Never mind, I've time to make some when I get back, there is plenty of atta and strong flour at home.

Look, that man is selling off lightly bruised peppers at 30p a pound. They're not Dutch, are they? Let's look at the box,

good (no imperative cook ever buys any- thing from Holland). We can't pass those up. Where can they fit in? Perhaps fried in salt, Spanish-style to start the meal off, with some of that Manzanilla — we ought to drink the last bottles: it does not last and it is always good for getting that boring couple from Kent University loosened up.'

Too much food now? She was decidedly wet first time, left things. But any left-over skate could be done up with those mussels tomorrow in a fish sauce. Is there any of the Spanish saffron left at home?