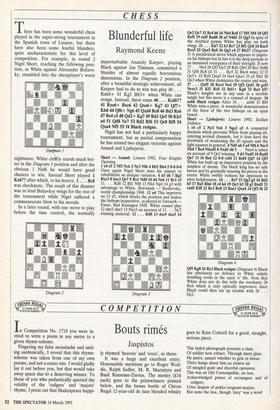 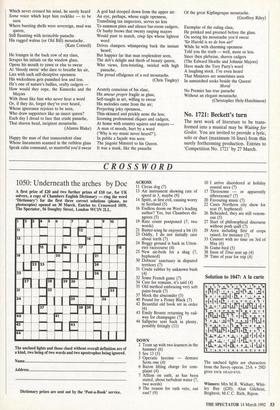 In Competition No. 1718 you were in- vited to write a poem in any metre to a given rhyme-scheme.

ly rhymed 'heaven' and 'even', so there.

It was a large and excellent entry. Honourable mentions go to Roger Wod- dis, Ralph Sadler, M. R. Macintyre and Basil Ransome-Davies. The money (£16 each) goes to the prizewinners printed below, and the bonus bottle of Chivas Regal 12-year-old de luxe blended whisky goes to Kate Cottrell for a good, straight, serious piece.

This faded photograph presents a class Of soldier now extinct. Through dusty glass He peers, unsure whether to grin or swear. There hangs about him an elusive air Of mingled guile and cheerful openness. This was an Old Contemptible, no less, Acknowledged prince of scroungers and of

cadgers, Utter despair of pukka sergeant-majors. But none the less, though 'duty' was a word

Which never crossed his mind, he surely heard Some voice which kept him rocklike — to be seen

Where bursting shells were sovereign, mud was queen, Still flaunting with invincible panache His ragged walrus (or Old Bill) moustache.

He lounges in the back row of my class, Scrapes his initials on the window glass, Opens his mouth to yawn or else to swear At 'bloody swots' who dare to breathe his air, Lies with such self-deceptive openness His wickedness gets punished less and less. He's one of nature's bullies, crafty cadgers How would they cope, the Kinnocks and the

Majors With those like him who never hear a word Or, if they do, forget they've ever heard, Whose ignorance rejoices to be seen, Who draw supporters like an insect queen? Each day I dread to face that crude panache, That shaven head, incipient moustache.

(Alanna Blake) Happy the man of that transcendent class Whose lineaments scanned in the ruthless glass Speak calm command, so masterful you'd swear A god had stooped down from the upper air: An eye, perhaps, whose eagle openness, Transfixing tax inspectors, serves no less To summon pints and silence bar-room cadgers, Or bushy brows that twenty rasping majors Would pant to match, crisp lips whose lightest word Drives dampers whimpering back the instant heard; But happier far that man resplendent seen, The deb's delight and throb of beauty queen, Who views, firm-bristling, twirled with high panache, The proud effulgence of a red moustache.

His amour propre fragile as glass,

Self-taught in art, willing to swear His melodies came from the air; Projecting joky openness, Thin-skinned and prickly none the less; Scorning professional cliques and cadgers, At home with country squires and majors - A man of moods, hurt by a word

In public a façade was seen: The jingoist Minstrel to his Queen.

It was a mask, like the panache Of the great Kiplingesque moustache.

(Geoffrey Riley) Exemplar of the ruling class, He prinked and preened before the glass.

On seeing his moustache you'd swear

While he with charming openness Told you the truth — well, more or less.

Since then plebeian, shaven cadgers (The Edward Heaths and Johnnie Majors) Have made the Tory Party's word A laughing stock. I've even heard That Ministers are sometimes seen In unmatched socks beside the Queen!

No Premier has true panache Without an elegant moustache.