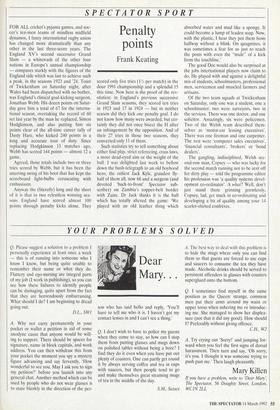 FOR ALL cricket's pyjama games, and soc- cer's ten-men teams of mindless midfield dynamos, I fancy international rugby union has changed more dramatically than any other in the last three-score years. The England XV's second successive Grand Slam — a whitewash of the other four nations in Europe's annual championship -- compares starkly with the figures of the England side which was last to achieve such a peak, in the seasons 1923 and '24. Toast of Twickenham on Saturday night, after Wales had been dispatched with no bother, was England's clinical goal-kicking surgeon, Jonathan Webb. His dozen points on Satur- day gave him a total of 67 for the interna- tional season, overtaking the record of 60 set last year by the man he replaced, Simon Hodgkinson, and also putting him six points clear of the all-time career tally of Dusty Hare, who kicked 240 points in a long and accurate tour of duty. Since replacing Hodgkinson 13 matches ago, Webb has scored 144 points — almost 12 a game.

Agreed, those totals include two or three tries scored by Webb, but it has been the unerring swing of his boot that has kept the scoreboard light-bulbs coruscating with enthusiasm.

Anyway the (literally) long and the short of it is that in two relentless winning sea- sons England have scored almost 100 points through penalty kicks alone. They

scored only five tries (1'/4 per match) in the dour 1991 championship and a splendid 15 this time. Now here is the proof of the rev- olution: in England's previous successive Grand Slam seasons, they scored ten tries in 1923 and 17 in 1924 — but in neither season did they kick one penalty goal. I do not know how many were awarded, but cer- tainly they did not once bisect the H after an infringement by the opposition. And of their 27 tries in those two seasons, they converted only 11 of them.

Such statistics try to tell something about either foul play, strict refereeing, crass laws, a more dead-eyed aim or the weight of the ball. I was delighted last week to bellow down the bush-telegraph to an old boyhood hero, the onliest Jack Kyle, grandest fly- half of them all, now 66 and a surgeon (and devoted 'back-to-front' Spectator sub- scriber) on Zambia's copper-belt border with Zaire. Dr Jack thinks it is the ball which has totally altered the game: 'We played with an old leather thing which

absorbed water and mud like a sponge. It could become a lump of leaden soap. Now, with the plastic, I hear they pot them from halfway without a blink. On quagmires, it was sometimes a feat for us just to reach the posts with even the "mule" of a kick from the touchline.'

The good Doc would also be surprised at the jobs international players now claim. to do. He played with and against a delightful mix of students, schoolmasters, professional men, servicemen and muscled farmers and artisans.

Of the two team squads at Twickenham on Saturday, only one was a student, one a schoolmaster; two were surveyors, two in the services. There was one doctor, and one solicitor. Amazingly, six were policemen. Two of the Welsh team described them- selves as 'motor-car leasing executives'. There was one fireman and one carpenter. The rest were 'computer sales executives', 'financial consultants', 'brokers' or 'bond dealers'.

The gangling, indisciplined, Welsh sec- ond-row man, Copsey — who was lucky for the second match running not to be sent off for dirty play — told the programme editor his profession was 'a quality systems devel- opment co-ordinator'. A what? Well, don't just stand there grinning gormlessly, Copsey, lad, get stuck in co-ordinating and developing a bit of quality among your 14 scarlet-shirted confreres.