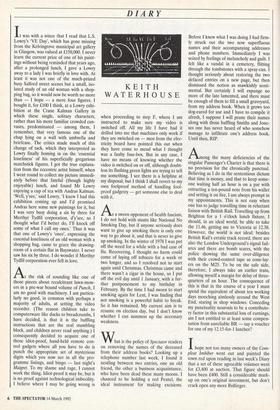 It was with a wince that I read that L.S. Lowry's 'VE Day', which has gone missing from the Kelvingrove municipal art gallery in Glasgow, was valued at £150,000. I never learn the current price of one of his paint- ings without being reminded that years ago, after a prolonged lunch, I gave a Lowry away to a lady I was briefly in love with. At least it was not one of the much-prized busy Salford street scenes but a small, iso- lated study of an old woman with a shop- ping bag, so it would now be worth no more than — I hope — a mere four figures. I bought it, for £100 I think, at a Lowry exhi- bition at the Crane Kalman Gallery in which these single, solitary characters, rather than his more familiar crowded can- vases, predominated — among them, I remember, that very famous one of the chap lying on a wall with umbrella and briefcase. The critics made much of this change of tack, which they interpreted as Lowry finally homing in on the 'essential loneliness' of his superficially gregarious matchstick figures. I got the true explana- tion from the eccentric artist himself, when I went round to collect my picture immedi- ately before that fateful (though highly enjoyable) lunch, and found Mr Lowry enjoying a cup of tea with Andras Kalman. `Well, y'see,' said Lowry, 'I knew I had this exhibition coming up and I'd promised Andras here some new paintings for it, but I was very busy doing a six by three for Merthyr Tydfil corporation, d'y'see, so I thought what I'd better do, I'll knock off some of what I call my ones.' Thus it was that one of Lowry's 'ones', expressing the essential loneliness of an old woman with a shopping bag, came to grace the drawing- room of a certain flat in Bayswater. I never saw his six by three. I do wonder if Merthyr Tydfil corporation ever fell in love.

At the risk of sounding like one of those pieces about recalcitrant lawn-mow- ers in a pre-war bound volume of Punch, I am no good with machinery. I am particu- larly no good, in common with perhaps a majority of adults, at setting the video recorder. (The reason children take to computerware like ducks to breadcrumbs, I have decided, is that it is the baffling instructions that are the real stumbling block, and children never read anything.) I consequently decided to acquire one of those idiot-proof, hand-held remote con- trol gadgets where all you have to do is punch the appropriate set of mysterious digits which you now see in all the pro- gramme listings, and bingo — last night's Maigret. To my shame and rage, I cannot work the thing. Idiot-proof it may be, but it is no proof against technological imbecility. I believe where I may be going wrong is

when proceeding to step F, where I am instructed to make sure my video is switched off. All my life I have had it drilled into me that machines only work if they are switched on — men from the elec- tricity board have pointed this out when they have come to mend what I thought was a faulty fuse-box. But in any case, I have no means of knowing whether the video is switched on or off, although doubt- less its flashing green lights are trying to tell me something. I see there is a helpline at my disposal, but I think I shall revert to my own foolproof method of handling fool- proof gadgetry — get someone else to deal with it.

As a sworn opponent of health fascism, I do not hold with stunts like National No Smoking Day, but if anyone seriously does want to give up smoking there is only one way to go about it, and that is never to give up smoking. In the winter of 1978 I was put off the weed for a while with a bad case of flu. Recovering, I thought no harm could come of laying off tobacco for a week or two longer, and so I resolved not to start again until Christmas. Christmas came and there wasn't a cigar in the house, so I put off the evil day until 1 January, with a fur- ther postponement to my birthday in February. By the time I had sworn to start smoking again for Lent, I was finding that not smoking is a powerful habit to break. So it has remained. My current aim is to resume on election day, but I don't know whether I can summon up the necessary weakness.

What is the policy of Spectator readers on removing the names of the deceased from their address books? Looking up a telephone number last week, I found it nestling between two entries, one an old friend, the other a business acquaintance, who have been dead these many moons. I chanced to be holding a red Pentel, the ideal instrument for making excisions.

Before I knew what I was doing I had firm- ly struck out the two now superfluous names and their accompanying addresses and phone numbers. Immediately I was seized by feelings of melancholy and guilt. I felt like a vandal in a cemetery, flitting through the tombstones with a spray-can. I thought seriously about restoring the two defaced entries on a new page, but then dismissed the notion as mawkishly senti- mental. But certainly I will expunge no more of the late lamented, and there must be enough of them to fill a small graveyard, from my address book. When it grows too dog-eared for use and I have to compile it afresh, I suppose I will prune their names along with those baffling Smiths and Jone- ses one has never heard of who somehow manage to infiltrate one's address book. Until then, RIP.

Along the many deficiencies of the singular Passenger's Charter is that there is no provision for the chronically punctual. Believing as I do in the sententious dictum that time is money, and that to keep some- one waiting half an hour is on a par with extracting a ten-pound note from his wallet and setting it on fire, I am always prompt in my appointments. This is not easy when one has to judge travelling time in reluctant liaison with British Rail. Travelling up from Brighton for a 1 o'clock lunch fixture, I should, in an ideal world, be able to take the 11.46, getting me to Victoria at 12.38. However, the world is not ideal: besides British Rail's erratic track record, there are also the London Underground's signal fail- ures and there are bomb scares, with the police showing the same over-diligence with their crowd-control tape as cone-lay- ers on the M25. To be on the safe side, therefore, I always take an earlier train, allowing myself a margin for delay of three- quarters of an hour. The consequence of this is that in the course of a year I must spend the equivalent of about ten working days mooching aimlessly around the West End, staring in shop windows. Conceding my punctuality neurosis to be a contributo- ry factor in this substantial loss of earnings, am I not entitled to at least some compen- sation from unreliable BR — say a voucher for one of my 12.15-for-1 lunches?

Ihope not too many owners of the Corn- pleat Imbiber went out and painted the town red upon reading in last week's Diary that a set of these agreeable volumes went for £3,400 at auction. That figure should have been £400. Still a considerable mark- up on one's original investment, but don't crack open any more Bollinger.