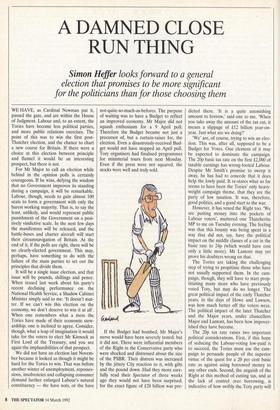 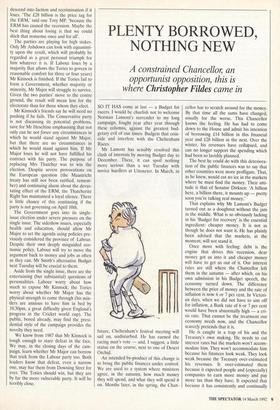 WE HAVE, as Cardinal Newman put it, passed the gate, and are within the House of Judgment. Labour and, to an extent, the Tories have become less political parties, and more public relations exercises. The point of this was to win the first post- Thatcher election, and the chance to chart a new course for Britain. If there were a choice at this election between principle and flannel it would be an interesting prospect, but there is not.

For Mr Major to call an election while behind in the opinion polls is certainly courageous. If he wins, defying the wisdom that no Government improves its standing during a campaign, it will be remarkable. Labour, though, needs to gain almost 100 seats to form a government with only the barest working majority. That is, to say the least, unlikely, and would represent public punishment of the Government on a posi- tively vindictive scale. In the next few days the manifestoes will be released, and the battle-buses and charter aircraft will start their circumnavigation of Britain. At the end of it, if the polls are right, there will be no clearly-elected government. This may, perhaps, have something to do with the failure of the main parties to set out the principles that divide them.

It will be a single issue election, and that issue will be pounds, shillings and pence. When teased last week about his party's recent declining performance on the National Health Service, a Shadow Cabinet Minister simply said to me: 'It doesn't mat- ter. If we can't win this election on the economy, we don't deserve to win it at all'. When one remembers what a mess the Tories have made of their economic stew- ardship, one is inclined to agree. Consider, though, what a leap of imagination it would take for the voters to elect Mr Kinnock as First Lord of the Treasury, and you see again the implausibilities of that prospect.

We did not have an election last Novem- ber because it looked as though it might be hard for the Tories to win. That was before another winter of unemployment, reposses- sions, insolvencies and collapsing consumer demand further enlarged Labour's natural constituency — the have nots, or the have

not-quite-so-much-as-befores. The purpose of waiting was to have a Budget to reflect an improved economy. Mr Major did not squash enthusiasm for a 9 April poll. Therefore the Budget became not just a precursor of, but a curtain-raiser for, the election. Even a disastrously-received Bud- get would not have stopped an April poll. Tory organisers had finalised programmes for ministerial tours from next Monday. Even if the press were not squared, the stocks were well and truly sold.

If the Budget had bombed, Mr Major's nerve would have been severely tested; but it did not. There were influential members of the Right in the Conservative party who were shocked and distressed about the size of the PSBR. Their distress was increased by the jittery City reaction to it, with gilts and the pound down .Had they more care- fully read their Spectator of three weeks ago they would not have been surprised, for the exact figure of £28 billion was pre-

dicted there. 'It is a quite astonishing amount to borrow,' said one to me. 'When you take away the amount of the tax cut, it means a slippage of £12 billion year-on- year. Just what are we doing?'

'We' are, of course, trying to win an elec- tion. This was, after all, supposed to be a Budget for Votes. One element of it may be expected to dominate the campaign. The 20p basic tax rate on the first £2,000 of taxable earnings has wrong-footed Labour. Despite Mr Smith's promise to sweep it away, he has had to concede that it does help the lowly paid. It re-states what so far seems to have been the Tories' only heavy- weight campaign theme, that they are the party of low taxation. It was, therefore, good politics, and a good start to the war.

However, it has vexed the Right too. 'We are putting money into the pockets of Labour voters', muttered one Thatcherite MP to me on Tuesday evening. The feeling was that this bounty was being spent in a way that did not, say, have the political impact on the middle classes of a cut in the basic rate to 24p (which would have cost only a little more). Mr Lamont may yet prove his doubters wrong on that.

The Tories are taking the challenging step of trying to propitiate those who have not usually supported them. In the cam- paign, though, they will have to start prop- titiating many more who have previously voted Tory, but may do no longer. The great political impact of the early Thatcher years, in the days of Howe and Lawson, was how much better off the voters were. The •political impact of the later Thatcher and the Major years, under chancellors Major and Lamont, has been how impover- ished they have become.

The 20p tax rate raises two important political considerations. First, if this hope of seducing the Labour-voting low-paid is to succeed, the Tories must use the cam- paign to persuade people of the superior virtue of the quest for a 20 per cent basic rate as against using borrowed, money to any other ends. Second, the anguish of the Right at this method of cutting tax, and at the lack of control over borrowing, is indicative of how swiftly the Tory party will

descend into faction and recrimination if it loses. 'The £28 billion is the price tag for the ERM,' said one Tory MP, 'because the ERM has caused the recession. Maybe the best thing about losing is that we could ditch that nonsense once and for all'.

The parties are playing for high stakes. Only Mr Ashdown can look with equanimi- ty upon the result, which will probably be regarded as a great personal triumph for him whatever it is. If Labour loses by a majority that allows the Tories to govern in reasonable comfort for three or four years) Mr Kinnock is finished. If the Tories fail to form a Government, whether majority or minority, Mr Major will struggle to survive.

Given the two parties' move to the centre ground, the result will mean less for the electorate than for those whom they elect.

Mr Kinnock's friends say he will need no pushing if he fails. The Conservative party is not discussing its potential problems,

which he would stand against Mr Major, but that there are no circumstances in which he would stand against him. If Mr Major loses he will not have fulfilled his contract with his party. The purpose of replacing Mrs Thatcher was to win the election. Despite severe provocations on the European question (the Maastricht treaty has still not been ratified, remem- ber) and continuing alarm about the devas- tating effect of the ERM, the Thatcherite Right has maintained a loyal silence. There is little chance of this continuing if the party is not governing on April 10th.

The Government goes into its single- issue election under severe pressure on the single issue. The sideshow issues, especially health and education, should allow Mr Major to set the agenda using policies pre- viously considered the province of Labour.

Despite their own deeply misguided eco- nomic policy, Labour will try to move the argument back to money and jobs as often as they can. Mr Smith's alternative Budget next Tuesday will be crucial to them.

Aside from the single issue, there are the entertaining (but substantial) questions of personalities. Labour worry about how much to expose Mr Kinnock; the Tories worry about whether Mr Major has the physical strength to come through (his min- ders are anxious to have him in bed by 10.30pm, a great difficulty given England's progress in the Cricket world cup). The public, bored already, may find the presi- dential style of the campaign provides the novelty they need.

We know from 1987 that Mr Kinnock is tough enough to stare defeat in the face.

We may, in the closing days of the cam- paign, learn whether Mr Major can borrow that trick from the Labour party too. Both leaders know that defeat, even a narrow one, may bar them from Downing Stret for ever. The Tories should win, but they arc by far the more vulnerable party. It will be terribly close.