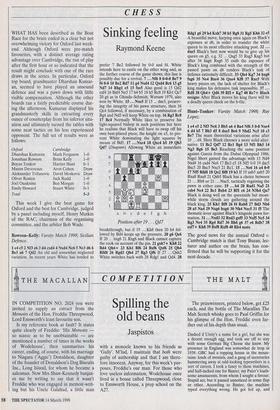 WHAT HAS been described as the Boat Race for the brain ended in a clear but not overwhelming victory for Oxford last week- end. Although Oxford were pre-match favourites, with a distinct average rating advantage over Cambridge, the run of play after the first hour or so indicated that the result might conclude with one of the rare draws in the series. In particular, Oxford top board, grandmaster Dharshan Kumar- an, seemed to have played an unsound defence and was a pawn down with little visible compensation. Although the other boards ran a fairly predictable course dur- ing the afternoon, Kumaran displayed his grandmasterly skills in extracting every ounce of counterplay from his inferior situ- ation and ultimately turned the tables with some neat tactics on his less experienced opponent. The full set of results were as follows:

This week I give the best game for Oxford and the best for Cambridge, judged by a panel including myself, Henry Mutkin of the RAC, chairman of the organising committee, and the arbiter Bob Wade.

The good news for the annual Oxford v. Cambridge match is that Tony Buzan, lec- turer and author on the brain, has con- firmed that he will be supporting it for the next decade.