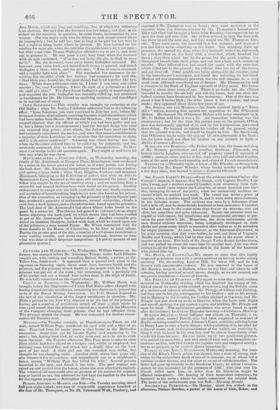 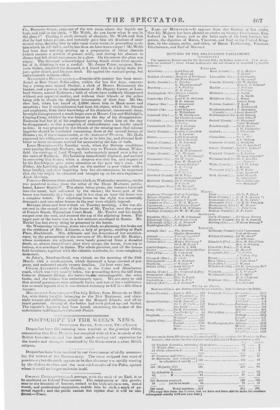 tain Young, and a seaman named Chandler, were returning from

Spit- head in a small yacht named the Catherine, of about fourteen tons bur- den, belonging to one of the party, when the .melancholy accident oc- curred which we noticed last week. The vessel was under a press of canvass, when a sudden squall took it, and it went down stern-foremost, in ten fathoms water. The accident was seen by a fisherman about half a mile off, and he immediately hastened to lend assistance. Chandler, who had not been in the water more than five or six minutes, was yet alive butt speechless and quite exhausted. Nearly ten minutes were oc- cupied in well-meant, but injudicious and unsuccessful attempts to pre- serve the poor fellow's life. Meantime,. the three unfortunate gentle- men floated without attention, being completely enveloped in their cloaks and great-coats, which so concealed their bodies as to be mistaken for empty garments. As soon, however, as the fisherman discovered, to his great surprise, that they were bodies, he took out those of Captains Bradby and Young, which had by that time been in the water about a quarter of an hour. The body of Sir Joseph Yorke floated farther down, and was picked up about the same time by another boat. Life was then extinct in all the three ; the seaman died in the hands of the boatman who picked him up. Mn. PETER, oe Correwail.—We regret to state that this highly respected gentleman met with a severe accident on his way to the county meeting. On descending Lauivet Hill, his herse fell, and he was thrown with considerable violence. He was removed to the house of Mr. Hamley, surgeon, at Bodmin, where he was bled, and where he still remains, having received several severe, though, as we are assured, not dangerous contusions.—Corn

PRING es: OF Cf. tea. oe.—We regret to state that a fatal accident occurred on Wednesday evening, which has deprived the county of Sel- kirk of one of its most peblic-spirited proprietors, and the Reform cause of a zealous and talented advocate. Mr. Pringle, of Clifton and Raining, had been ma in his gig, accompanied by his brother ; and on his return- ing to !hailing in the evening, his brother alighted at the door, and Mr. Pringle had just stood up to do so likewise, when the horse took fright and ran off, striking the gig against a gate, and pitching Mr. Pringle out upon Ids head. The unfortunate gentleman was never heard to speak after the accident ; he died on Thursday morning.—Caledonian Mercury.

SUDDEN DEATIL—Abont half-past one o'clock on Thursday, a re- spectable man, named Powell, who had been employed as overseer of Baylis's printing-establishment, Johnson's Court, went into a dining-house in Drury Lane to take a hasty dinner; whilepartaking of it, he called for a glass of water, and, to the astonishment of the waiter, on receiving it, flung it with violence in his own face, and he almost immediately after- wards fell from his seat. lie was taken up by- two gentlemen present, who untied his neck:audit ; and four medical men were in immediate at- tendance on him, and bled him in the jugular vein and temporal artery ; but to no purpose, as he expired almost immediately.

DEATHS IN TM KING'S Beeen.—On 'Wednesday morning, the inte- rior of the King's Bench prison was thrown into a state of strong exci- tation by the melancholy death of two of its inmates, one of whom fell a sacrifice to slow disease, and the other to an act of self-destruction. The latter had gone up recently to the Insolvent Court, by whose Commis- sioners he was remanded for the payment of 1501.: with that sum his friends called upon him, in order that his liberation might be. effected immediately. On hearing of their benevolent intentions, he hastened to his room ; where he rashly committed the suicidal deed. The name of the unfortunate man was Bell.—.Morning Herald.

ACCIDENTAL POISONING.—On Monday, about five o'clock in the afternoon, Nathan Butcher, a packer of the house of Gale, Baker, and Co., Bouverie Street, came out of the wet room where the liquids are kept, and said to the clerk, " Mr. Webb, do you know what it was in the glass ?" Finding it smelt strongly of almonds, Mr. Webb told him that he had taken poison, and instantly gave him six drachms of anti- monial wine, desiring him to take some warm water, in proceeding to oh- tain which he fell down, and in less than an hour was a corpse !.Mr.Webb had been that morning putting up a preparation of bitter almonds (which contain a portien of prussic acid), and during his absence to dinner had left about two ounces in a glass. On biereturn the glass was empty. The deceased acknowledged having drunk about three spoons- ful of it, thinking it was a cordial. Mr. James Patey, surgeon, Bou- verie Street, attended the deceased, ard found him in a dying state, his jaws quite closed, and his eyes fixed. He applied the stomach-pump, but unfortunately without effect. MisTERIOUS Meares-aux:se:ea—Considerable anxiety has been mani- fested at Bow Street Police-office, within the last few days, concern- ing a young man named Onslow, a clerk of Messrs. Drummond the banker, and a person in the employment of Mr. Deputy Carter, of Lom- bard Street, named Enderson ; both of whom have suddenly disappeared without any apparent motive, and without their friends or the police being able to obtain the slightest information of their fate. Mr. On- slow had, when last beard of, 2,000/. about him in Bank-notes and securities ; but if embezzlement had been his object, which his friends and employers, from their knowledge of his character, strenuously deny, he might have procured a much larger sum at Messrs. Cox and Biddulph's, Charing Cross, whither he was bound on the day of his disappearance. Enderson had but 2/. of his employers' property about him on the day he disappeared; so that a suspicion of embezzlement can hardly attach to him. It was proposed by the friends of the missing men that minute inquiries should be instituted concerning them at the several houses of ill-fame; or, if there unsuccessful, at the ,-Inalomical Thratres. Mr. Halls expressed his willingness to assist as far as in him lay, and directed Led- bitter to leave no means untried for ascertaining the fete of both.

LORD MORPETIL—On Tuesday week, when the Reform candidates were passing through Horbury, on their way to Thornes House, Wake- field, the carriage of Lord Morpeth unfortunately passed over a boy of the name of Raddock. His Lordship immediately alighted, and assisted in conveying him home; when a surgeon was sent for, and requested by his Lordship to give every attention to the poor boy's case. On Friday, his Lordship again called on the mother (a poor widow with a large family), and after inquiring into her circumstances, he requested that the boy might he educated and brought Isp at his own expense.— Leeds Mercury.

Frusta.— Between three and four o'clock on Wednesday morning, smoke was perceived issuing from the cellar of the Three Mariners public- house, Lower Shadwell. The alarm being given, the inmates hastened into the street, half suffocated by the smoke ; the lower part of the house was instantly in a blaze; and in less than an hour the house was a complete wreck. The adjoining house on the right was materially damaged ; and two other houses in the rear were slightly injured.

Between three and four o'clock on Tuesday morning, a fire was dis- covered in the second story of the house of Mr. Towler, near the corner of Francis Street, Tottenham Court Road. Mr. Towlpr and his family escaped over the roof, and entered the top of the adjoining house. The upper part of the house was in a few minutes enveloped in flames.. Mr. Towler has lost every thing he possessed in the house.

On Wednesday morning, about two o'clock, analarming fire broke out at the residence of Mrs. Atkinson, a lady of property, residing at Park Place, Blackheath. Mrs. Atkinson and the domestics of her establish- ment, by the promptitude of the servants of Mr. Griee and Mr. 'ladder, whose residences are adjacent, were barely preserved from a dreadful death, 11S, almost immediately after their escape, the house, from top to bottom, was enveloped in flames. The whole premises, and all the house- hold furniture, together with the valuable wardrobe, &ea were completely destroyed.

St. John's, Newfoundland, was visited, on the morning of the 11th March, with a conflagration, which destroyed a large amount of pro- perty, and unhoused nearly twenty families. No lives were lost.

COACH ACCIDENT—Oil Tuesday, as the Colne and Manchester coach, which was very lieavily laden, was proceeding down the hill from Colue to Primmit Bridge, the horses beeams unmanageable, the reins broke, and the vehicle was unfortunately upset. We are sorry to add that several passengers were seriously hurt ; and one of the wheel-horses was so much injured that it was deemed necessary to kill it.—Blas kbartt Gazette.

MELANcuctLY SIIIPWRECIi.—TIle brig Billow, from Bermuda to Hali- fax, with thirty invalids belonging to the 31st Regiment, and sixty- eight women and elsildren, struck on the Rugged Islands, and all on hoard perished. Several of the bodies had been picked up and buried. The captain's log-book had been found, containing the names of the unfortunate individuals.—Falazouth Packet.