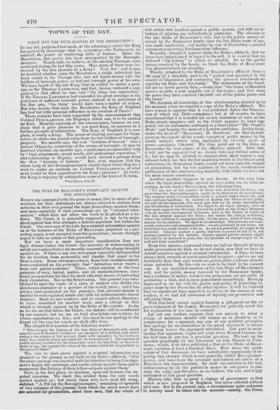 WHAT HAS 1HE KING GAINED BY THE DISSOLUTION?

IN our list, published last week, of the advantages Which the King has gained by dissolving—that is, reforming—the Parliament, we omitted the power of conferring titles of honour. Since the Revolution, this power has been monopolized by the Borough- mongers. Nearly half, we believe, of the existing Peerages were conferred during the last fifty years. How many of these were be- stowed by the free pleasure of a King ? Very few : and it may be doubted whether, since the Revolution, a single individual has been raised to the Peerage who had not found favour with the holders of borough power, or had not borough power of his own. We have heard of the late King, that he wished to confer a peer- age on Sir THOMAS LAWRENCE, and that, having ventured a sug- gestion to that effect, he was told "the thing was impossible." if Sir TticeuAs LAWRENCE had expended his great earnings in the purchase of sufficient borough power, instead of in patronage of the fine arts, "the thing" would have been a matter of course. But who doubts that since the Revolution the King of England has had but little personal influence in the creation of Peers ? These remarks have been suggested by the announcement that Colonel F1TZCLARENCE, his Majesty's eldest son, is to be created an Earl. Heartily rejoicing at the circumstance, because we con- clude that it gives pleasure to our good King, we perceive in it further grounds of satisfaction. The King of England, it is now plain, is really a King. The power of creating peerages for them- selves or others has passed away from the late holders of borough- property. Six months ago, the real "fountain of honour" was a narrow Oligarchy, consisting of the owners of boroughs. It may be doubted whether, six months ago, a gentleman recommended only by "high attainments, moral worth, and professional reputation,"* and relationship to Majesty, would have derived a peerage from the then "fountain of honour." But, NOW, suppose that the whole body of late Boroughmongers should object to-his Majesty's wish to confer an earldom on Colonel FITZCLARENCE, of what avail would be their opposition to the King's pleasure ? In truth, the King is enjoying by anticipation some of the fruits of Reform.