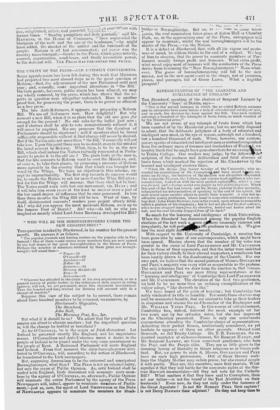 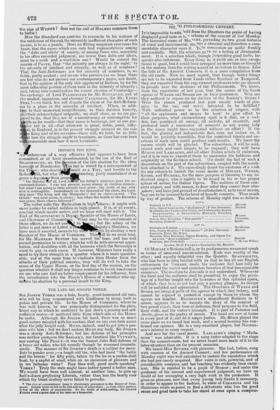 REPRESENTATIVES OF " THE LEARNING AND INTELLIGENCE OF ENGLAND."

THE Standard, speaking of the election of Sergeant LEFROY by the University "boys" of Dublin, says- " This is the second instance in which the so-called Reform measure and its advocates have come before a body of educated and intelligent men,

and in each, the decision has been against the Bill. Two such verdicts outweigh a hundred of the triumphs of brute force, so much vaunted of by the Ministerial press."

We are not aware of any triumph of brute force which has been vaunted of by the Ministerial press ; but we are fully disposed to admit, that the deliberate judgment of a body of educated and intelligent men must, in the eye of reason, outweigh not a hundred, but a hundred thousand of such. When, however, our contem- porary speaks of educated and intelligent men as contradist inguished from the ordinary mass of freemen and freeholders of Engla , we humbly think that he might have gone elsewhere for an examp han to Trinity College. Our readers may judge by the followi de! scription, of the coolness and deliberation and total absence of brute force which marked the rejection of Mr. CRAMPTON by the learned and intelligent electors there.

" When Mr. Byrne [the Senior Scholar of the University, who se- conded the nomination of Mr. Cramptonklyad been about tainty mi- nutes of his legs, the business of the electron was altogether sr spended.

The venerable Provost, the Fellows, and solemn legal gentlemen who sur- rounded him, looked on with the most perfect equaniaty, whilst a ring

was formed, and a boxing-match was fought by two skilful pugilists. When this part of the fun had ceased, and Mr. Byrne, yielding to dire necessity, relinquished his determination of speaking to the end of his speech, the mob seized upon another object to gratify their humour. A vain but in- offensive young gentleman, whose name is somewhat celebrated as a col- lege dust (John Denis Browne), rose in the crowd, upon whom he essayed to inflict a portion of his eloquence ; but he had not finished the first sentence, when he was dragged down from his elevation, hauled and beaten about the hall, and the coat literally dragged from off his back."

So much for the learning and intelligence of Irish Universities. When the Standard has discovered among the popular English

elections of the last week a ene o ore unseemly violence and irregularity, he will per t e goodness to cite it. We give him the next eight da e search.

. With respect to the University of Cambridge, a scrutiny has been gone into by some of our contemporaries, which might have been spared. Having shown that the number of lay votes was greater in the cases of Lord PALMERSTON and Mr. CA.VENDISH than in those of their opponents, and that the latter were indebted for their victory chiefly to their clerical supporters, a conclusion has been hastily drawn to the disadvantage of the Church. For our own part, we believe that the sacred portion of Messrs. GousBURN and PEEL'S majority was every whit as respectable as the profane. The only inference that we draw from the election is, that Messrs. GOULBURN and PEEL are more fitting representatives of the "learning and intelligence" of Cambridge than Lord PALMERSTON and Mr. CAVENDISH. The elevation of the first two gentlemen, we hold to be no more than an ordinary exemplification of the vulgar adage, "like draweth to like.'

We have heard of the pride of learning ; but Cambridge has nobly vindicated its title to humility. For surely those electors may well be accounted humble, that are content to take as their leaders in eloquence and science the ex-Chancellor of the Exchequer and Mr. WILLIAM YATES PEEL. In this course of self-abasement, Cambridge has, indeed, followed the meek example set her two years ago by her orthodox sister, but she has improved on the Christian precedent. There is only one unfortunate circumstance attending the Cambridge choice of representatives. Admitting their perfect fitness, intellectually considered, we yet hesitate to approve of them on other grounds. Oxford went thorough, so did Trinity College. Mr. T. B. ESTCOURT, the re- doubted regulator of alehouse-licences, Sir ROBERT HARRY, and Mr. Sergeant LEPROY, are three consistent gentlemen, who hate the Pope and the People alike. They are as little given to the damning heresy of liberality in things religious as in things poli- tical. But, we grieve to state it, Messrs. GOULBURN and PEEL have no such high pretensions. Out of these literary suck- lings the Mighty Mother may ordain praise, but she cannot couple it with purity. They are, like ourselves, mere frail mortals. What signifies it that they will battle for the corporate rights of the thir- teen Harwich immaculates—did they not vote for the Catholic Bill? What matters it that they have said to Corruption, thou art our father—is not the brand of the Test Abolition on their foreheads ? Even now, do they not rally under the banners of the Great Apostate ? Is not Sir ROBERT PEEL their captain? is not Derry DAWSON their axljutant ? Do they not keep time the pipe of WYNNE ? does not the call of HOLMES Summon them to battle ?

How the Standard can contrive to reconcile to his notions of the nobleness of the end, the miserably inefficient character of such means, is to us a puzzle. Does no flitting suspicion ever cross his brain, that the cause which can only find representatives among the "dolts and idiots" of society, or among those who, according to his often recorded judgment, are worse than dolts and idiots, must be a weak and a worthless one ? Would he extend the maxim of PAINE, that "the minority are always in the right," to the minority of intellect and integrity, as well as of numbers ? That the Anti-Reformers are the minority of numbers, is, we think, pretty evident ; and no one who peruses (as we hope there are few who do not peruse) our contemporary's pages, can doubt, that in the opinion of the only able opponent of Reform, by far the most influential portion of them rank in the minority of integrity ; and, taking into consideration the recent election of Cambridge— the exchange of Lord PALMERSTON for Mr. GouLnuaN, and of the modest, ingenious, and classical CAVENDISH, for Mr. YATES PEEL !—we think few will dispute the claim of the Anti-Reform- ers to a place in the minority of intellect. When, in addi- I* to their numerical insignificance, to their dubious honesty, and their acknowledged imllecility, we shall show, as we are pre-

red to do, that they are of a constituency as contemptible for lth as for worth—that their cause is bankrupt, not in one.par- lar but in all—that whatever is great, noble, good, influ- al, in England, is in the present struggle arrayed on the side King and of his servants—there will, we trust, be as little

t how the struggle ought to terminate, as there has ever been iv-'easonable men how it must terminate.