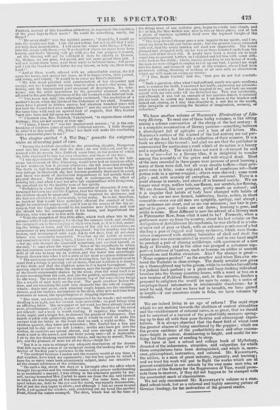 We have another volume of Nicnom's Illustrations of Lite- rary

History. To read one of these bulky volumes, is like sitting among a solemn convocation of the clergy of the last century: it is a complete resurrection of literary parsons—something between a churchyard full of epitaphs and a box of old letters. Mr. NicnoLs's notices of the learned of the last century are not por- traits of the dead, but literally a collection of their remains. It is a book we always like to read ; and glad we are that the publisher is remunerated for continuing a work which of its nature is 'a luxury and a superfluity. The world does not want it—it cannot be said to be of use—but to a literary idler, it is delightful to wander among this assembly of the grave and well-wigged dead. Most of the men recorded in these pages were persons of great learning ; many of them were dull, but all were erudite triflers—their gew- gaws were in folio ; some enjcyed a kind of cumbrous wit—their genius rode in a spring-waggon ; others were shrewd ; some were jolly ; and, with scarcely an exception, all reverend. There is a great change in society, and above all in learned society. We no longer wear wigs, neither bob, nor flaxen, nor scratch, nor flowing. We are dressed, like our potatoes, pretty much au naturel; and it is singular that habits of body have changed with habits of tailor : we are not now formal, lumbering, heavy, sedate, in short venerable—even our old men are sprightly, springy, and abrupt ; our sentences are short, and so are our manners ; our hair is per- mitted to grow, our books are cut down ; learning is gone, and utility is come. How different is now the advent of a literary man in Paternoster Row, from what it used to he ! Formerly, when a gentleman came up from the country, about his last volume on the Antiquities of Antediluvian Mesopotamia, he was clothed in a volu- minous suit of grey or black, with an extensive pent house of a hat shading a pair of rugged and hoary eyebrows, which were them- selves compressed with striding barnacles of shell and steel: the nether man was circumvoluted in worsted; and in one hand might be pendant a pair of shining saddlebags, with specimens of a new Body of Divinity, and in the other was grasped a columnar sup- port—a buttress of bamboo, such as become an edifice of ancient proportions and Gothic structure. Alas ! the change is great—, " Nous sommes perdus ! " as the courtier said when ROLAND en- tered the Tuileries in shoe-strings. The dandy novelist now gives Up a thoroughbred nag to his groom, while he switches himself into the judicial back-parlour ; or a plain and busy-looking individual brushes into the literary counting-house, with a word or two on a new treatise of Political Economy, and, in five minutes, finishes a proposal to enlighten the world for ages to come, by a series of encyclopmdiacal information in interminable duodecimo : for it must be said, that what we have lost in breadth, we have gained in length—if our ancestors wrote in folio, we have volumes by decades.