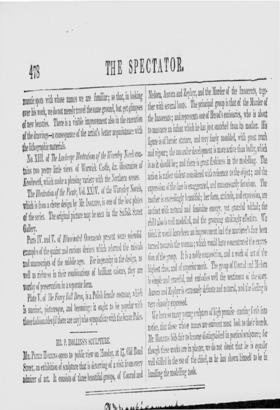 AN. Pwiat Hor.t.ms opens to public view on Monday, at 17, Old Bond Street, an exhibition of sculpture that is deserving of a visit from every admirer of art. It consists of three beautiful groups, of Conrad and Medora, Aurora and Zephyr, and the Murder of the Innocents, toge- ther with several busts. The principal group is that of the Murder of the Innocents ; and represents one of Herod's emissaries, who is about to massacre an infant which he has just snatched from its mother. His figure is of heroic stature, and very finely moulded, with great truth and vigour ; the muscular development is more active than bulky, will:I:he iS as it should be ; and there is great fleshiness in the modelling. The action is rather violent considered with reference to the object ; and the expression of the face is exaggerated, and unnecessarily ferocious. mother is exceedingly beautiful ; her form, attitude, and expression, are instinct with natural and feminine energy, yet graceful withal ; the child also is well modelled, and the grouping strikingly effective. We think it would have been an improvement had the murderer's face been turned towards the woman ; which would have concentrated tl:e expres- sbm of the group. It is a noble composition, and a work of art of the highest class. and of superior merit. The group of Conrad end 3le:lora is simple and graceful, and embodies well the sentiment oi' the story. Aurora and Zephyr is extremely delicate and natural, and tile feeling is very chastely expressed. We have so many young sculptors of high promrs. e startin;t: forth into notice, that those whose names are eminent must look to their laurels.. Mr. IlomaNs bids fair to become distinguished in poetical sculpture ; for though these works are in plaster, we do not doubt that he is equally well skilled in the use of the chisel, as he. has shown himself to be in handling the modelling tools.