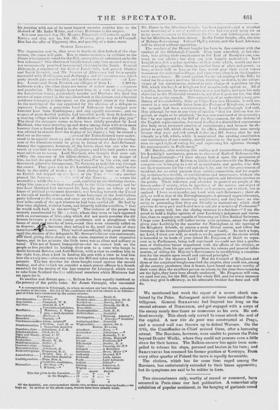 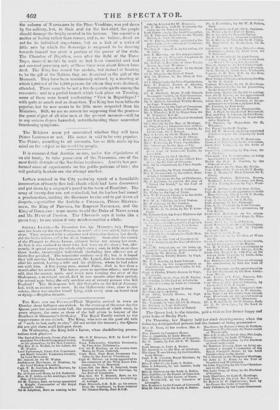 Page 5, 14 May 1831 — Two circumstances only, worthy of record or comment, have occurred
Close

Two circumstances only, worthy of record or comment, have occurred

in Paris since our last publication. A somewhat silly exhibition of popular sentiment, in the hanging of garlands round the column of NAPOLEON in the Place VendOme, was put down by the military, lest, in their zeal for the lost chief, the people should damage the trophy erected in his honour. The second is a matter of feeling rather than reason, and is, we believe, dwelt on not for its individual importance, but as a link of a series of little acts by which the Sovereign is supposed to be drawing towards himself too great a portion of the power of the state. The Chamber of Deputies, soon after the fight of the Three Days, decreed medals to such as had been wounded and had not received pecuniary aid ; of these there were about fifteen hun- dred. The King has issued the medals, but instead of bearing to be the gift of the Nation, they are described as the gift of the Monarch. They have been unanimously refused, by a meeting at which 1,000 out of the 1,500 persons for whom they were destined, attended, There seem to be not a few desperate spirits among the recusants ; and in a partial tumult which took place on Tuesday, some of them were heard vociferating " Vive la Republique ! " with quite as much zeal as discretion. The King has been hitherto popular, but he now seems to be little more respected than his Ministers. Still, we see no reason for supposing that the peace— the great object of all wise men at the present moment—will be in any serious degree hazarded, notwithstanding these somewhat threatening Symptoms.