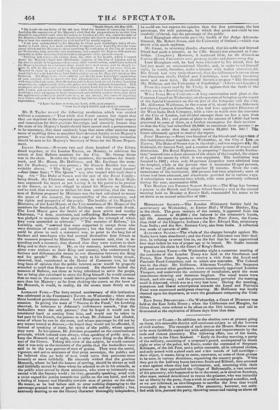 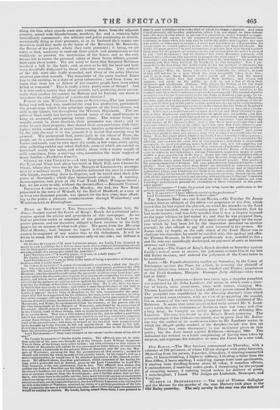 COUNTY OF CLARE.—In addition to the election rows at present

going on there, this miserable district still continues subject to all the horrors of civil warfare. The example of such men as the Messrs. Mahon seems to be most faithfully copied out with additions and improvements by the rude and riotous peasantry. The following affair, one of the latest, is recorded in the Clare Sentinel. "Early on Sunday morning, a party of the military, consisting of a sergeant's guard, accompanied by about eight or nine of the police, left Ennis, under the command of Sergeant Robinson, of the 5th Foot, and a police constable, all in coloured clothes, and only armed with a pistol each and a few rounds of ball cartridge— their object, it seems, being to come, unawares, on some of those groups- to be seen, in various directions, organizing the country people. When they got to the half-way house between Ennis and Kilrush, they arrested a man against whom they had information, and, returning with their prisoner, as they approached the village of Ballynacally, a vast number of the peasantry, who happened to be in the street, as is usualon Sundays, after mass, seemed determined to rescue the prisoner, who was instantly set at liberty by the party, from awish to avoid so unequal a conflict, and, as we are informed, an unwillingness to sacrifice the lives that would eventually drop in a rencontre. The peasantry, however, not satis- fied with this, pursued the party, throwing stones and raising an alarm all Wong the line, when crowds were seen coming down from the adjacent i:ountry, armed with blunderbusses, muskets, &c. and a running fight imtnediately commenced ; the military and police continuing to retreat, occasionally firing at their pursuers, so as to husband their scanty am- munition until they made to the house of the Reverend Mr. Kennedy, the Rector of the parish, where they were protected ; it being, we are sorry to find, necessary to send out their pistols and ammunition to the multitude to prevent the destruction of the house, and as the only means left to insure the personal safety of these bravo fellows, guaran- teed upon these terms. We are sorry to learn that Sergeant Robinson received a ball in the back, and, as soon as he fell, his head and body were dreadfully disfigured by these relertless wretches. Two soldiers a the 5th were also badly wounded, and three of the police likewise received gunshot wounds. The remainder of the party reached Ennis late in the evening, in a state of great exhaustion ; and from them we learn that front ten to fifteen of the country people have been either killed or wounded." This is really a very pretty state of things! And it is into such a society that three persons, each professing more strenu- ously than another his anxiety for Reform and for Ireland, are about to :introduce the calm delights of a contested election !

FAMINV IN THE IVEsTERN ISLANDS OF SCOTLAND—The last summer 'being very cold and wet, rendered the crop less productive, particularly the potato crop. which is the principal support of the lower classes, not only in the islands, but throughout the Western Highlands. The low price of black cattle last harvest induced many of the small tenants to 'keep an overstock, anticipating better times. The winter being un- usually severe in those districts, their provender ran short ; and in _order m save their property, they shared their own provisions with their Woes, which rendered, in many instances, families quite destitute; and by the tune the seed is in the ground, it is feared that scarcity may lie general. We understand that, particularly in the isitied of Bane, the people are in a most distressing state. Hundreds of them, with their horses and creels, may be seen upon the sands, at low water,every spring tide, collecting cockles and other shell-fish, some of which are carried on 'horseback Dearly ten miles, and which, along with a scanty supply of .milk sometimes, from a starving ewe, constitutes the main support of many familes.—Peraskire COHlier. ST nix E OF rItE COLLIEns.—A very large meeting of the colliers of the Tyne and Wear took place last week at Black Fell, near Chester-le- Street, where they were met by the Marquis of Londonderry, accompa- nied be a military escort. His Lordship addressed the men at consider- able length, requesting them to disperse, and he would meet their dele- gates at Newcastle; which they immediately acceded to. A meeting, in consequence, took place at the Coal Trade Office, Westgate Street ; but, we are sorry to add, without the desired effect. —Newcastle Courant. Isuntoven CommuNteaeroat—On Monday, the 2nd, the New Road presented to the town of Walsall, by the Earl of Bradford, at a cost of at least two thousand pounds, was opened for the first time, thus afford- ing to the public a pleasant communication through Wednesbury and Westbromwich to Birmingham..