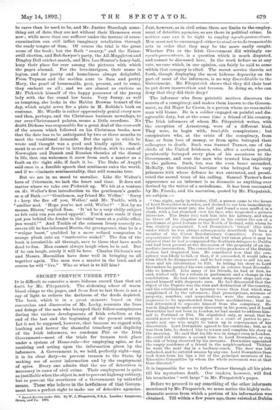 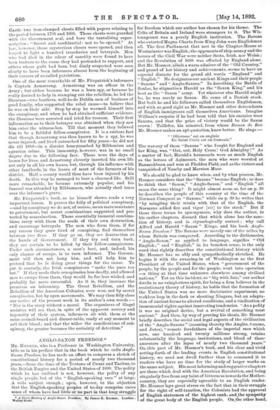 IT is difficult to conceive a more hideous record than that set forth by Mr. Fitzpatrick. The sickening odour of warm blood clings to the pages, and from first to last there is not a ray of light to redeem the darkness of the deeds depicted. The book, which is in a great measure based on the researches and discoveries of Mr. Lecky, recounts the lives and doings of the men who betrayed their fellow-conspirators during the various developments of Irish rebellion at the end of the last and the beginning of the present century. Let it not be supposed, however, that because we regard with loathing and horror the shameful treachery and duplicity of the Irish informers, we condemn Pitt or the Irish Government—most of the trials for treason took place under a system of Home-rule—for employing spies, or for receiving and acting upon the information given by the informers. A Government is, we hold, perfectly right—nay, it is its clear duty—to prevent treason to the State, by making use of secret information and by the employment of spies. Every one admits that the use of detectives is necessary in cases of civil crime. Their employment is quite as justifiable when the object is, not to prevent highway robbery, but to prevent the overthrow of a Government by unlawful means. Those who believe in the lawfulness of that Govern- ment have a perfect right to make use of detective agencies.

Just, however, as in civil crime there are limits to the employ- ment of detective agencies, so are there in political crime. In neither case can it be right to employ agents-provocateurs.

Men must not be encouraged either to steal or to do treasonable acts in order that they may be the more easily caught. Whether Pitt or the Irish Government did wittingly use agents-provocateurs, is a question which is much disputed, and cannot be discussed here. In the work before us at any rate, no case which, in our opinion, can fairly be said to come within that category is cited. The secret service therein set forth, though displaying the most hideous depravity on the part of most of the informers, is no way discreditable to the Government. Mr. Fitzpatrick shows that they did their beat to put down insurrection and treason. In doing so, who can deny that they did their duty ?

The informer who from patriotic motives discovers the secrets of a conspiracy, and makes them known to the Govern- ment, as did Major Le Caron, is a person whom no reasonable man will blame. He is a soldier engaged on painful and dis- agreeable duty, but at the same time a friend of his country. The Irish informers of whom Mr. Fitzpatrick writes, with the exception of Armstrong, were of a different kind. They were, to begin with, bond -fide conspirators ; but conspirators who, at the crisis of the conspiracy, from fear, or from love of money, or from spite, betrayed their colleagues to death. Such was Samuel Turner, one of the chiefs of the United Irishmen, who, after a certain period, persistently betrayed every plan of his associates to the Government, and sent the men who trusted him implicitly to the gallows. Such, too, was the even baser scoundrel, McNally, the theatrical barrister who betrayed the very prisoners with whose defence he was entrusted, and prosti- tuted the sacred trust of his calling. Samuel Turner's first appearance as an informer is as dramatic as anything ever devised by the writer of a melodrama. It has been recounted by Mr. Froude, and his narration, quoted by Mr. Fitzpatrick, we subjoin :—

" One night, early in October, 1797, a person came to the house of Lord Downshire in London, and desired to see him immediately. Lord Downshire went into the hall and found a man muffled in a cloak, with a hat slouched over his face, who requested a private interview. The Duke (sic) took him into his Library, and when he threw off his disguise recognised in his visitor the son of a gentleman of good fortune in tho North of Ireland, with whom he was slightly acquainted. Lord Downshire's ' friend ' (the title under which he was always subsequently described) had been a member of the Ulster Revolutionary Committee. From his acquaintance with the details of what had taken place it may be inferred that he had accompanied the Northern delegacy to Dublin and had been present at the discussion of the propriety of an im- mediate insurrection. The cowardice or the prudence of the Dublin faction had disgusted him. He considered now that the con- spiracy was likely to fail, or that, if it succeeded, it would take a form which he disapproved ; and he had come over to sell his ser- vices and his information to Pitt. In telling his story to Lord Downshire he painted his own conduct in colours least discredit- able to himself. Like many of his friends, he had at first, he said, wished only for a reform in parliament and a change in the constitution. He had since taken many desperate steps and con- nected himself with desperate men. He had discovered that the object of the Papists was the ruin and destruction of the country, and the establishment of a tyranny worse than that which-was complained of by the reformers ; that proscriptions, seizures of property, murders, and assassinations were the certain con- sequences to be apprehended from their machinations ; that he had determined to separate himself from the conspiracy. He was in England to make every discovery in his power, and if Lord Downshire had not been in London, he had meant to address him- self to Portland or Pitt. He stipulated only, as usual, that he should never be called on to appear in a court of justice to pro- secute any one who might be taken up in consequence of his discoveries. Lord Downshire agreed to his conditions ; but, as it was then late, he desired him to return and complete his story in the morning. He said that his life was in danger even in London. He could not venture a second time to Lord Downshire, or run the risk of being observed by his servants. Downshire appointed the empty residence of a. friend in the neighbourhood. Thither he went the next day in a hackney-coach. The door was left unlocked, and he entered unseen by any one. Lord Downshire then took down from his lips a list of the principal members of the Executive Committee by whom the whole movement was at that time directed."

till his mysterious death. Our readers, however, will find his treacheries "writ large" in Mr. Fitzpatrick's pages.

Before we proceed to say something of the other informers mentioned by Mr. Fitzpatrick, we must notice the highly melo-

dramatic source from which a portion of his information was obtained. Till within a few years ago, there existed at Dublin Castle two iron-clamped chests filled with papers relating to the period between 1795 and 1805. These chests were guarded with the Government seal, and bore the tantalising super- scription: "Secret and confidential : not to be opened." At last, however, these mysterious chests were opened, and then leaped to light a hundred treacheries and betrayals. Men who had died in the odour of sanctity were found to have been traitors to the cause they bad pretended to support, and others whose guilt had been but dimly suspected were seen clearly to have been informers almost from the beginning of their careers of so-called patriotism.

One of the most remarkable of Mr. Fitzpatrick's informers is Captain Armstrong. Armstrong was an officer in the Army ; but either because he was a born spy, or because he really desired to help in stamping out the rebellion, he led the Shearses—two brothers, well-to-do Dublin men of business of good family, who supported the rebel cause—to believe that he was on their side. Step by step he wormed himself into the conspiracy, and when he had obtained sufficient evidence, the Shearses were arrested and tried for treason. Their first information as to their betrayer was obtained when they saw him enter the witness-box. Till that moment they believed him to be a faithful fellow-conspirator. It is a curious fact that though Armstrong was thus known to be a spy, he was never injured, and lived untouched for fifty years—he did not die till 1858—in a district honeycombed by Ribbonism and agrarian crime. This immunity, however, was in no small degree due to the following fact. Those were the days of leases for lives, and Armstrong cleverly inserted his own life not only in all his own leases, but, through his influence with other landlords, in the leases of most of the farmers of his district. Half a county would thus have been injured by his death. In this way he managed to bear a charmed life. Still more remarkable, he became extremely popular, and his funeral was attended by Ribbonmen, who actually shed tears over the informer's grave.

Mr. Fitzpatrick's book, as he himself shows, reads a very important lesson. It proves the folly of political conspiracy, —and by conspiracy we do not, of course, mean mere resistance to government, but secret combinations supported and pro- tected by assassination. Those essentially immoral combina- tions carry with them the seeds of their own destruction, and encourage betrayals. The men who form them, if for any reason they grow tired of conspiring, find themselves between two fires. If they go on, they see destruction at the hands of Government. If they try and turn back, they are certain to be killed by their fellow-conspirators. Under such circumstances, a man's best, and, indeed, his only chance of escape, is to turn informer. The Govern- ment will then not hang him, and will help him to pretend that he is doing great things for the cause. To put it coarsely, the Irish conspirators "make the pace too hot." If they made their conspiracies less deadly, and allowed men to escape from them, they would be far less wicked, and probably far more successful. As it is, they increase the premium on informing. The Great Rebellion, and the Rebellion of the American Colonies, were won, not by secret conspiracies, but by open movements. We may then fitly close our notice of the present work in its author's own words :— "Nor is the story without a moral. The organisers of illegal societies will see that, in spite of the apparent secrecy and ingenuity of their system, informers sit with them at the same council-board and dinner-table, ready at any moment to sell their blood ; and that the wider the ramifications of con- spiracy, the greater becomes the certainty of detection."