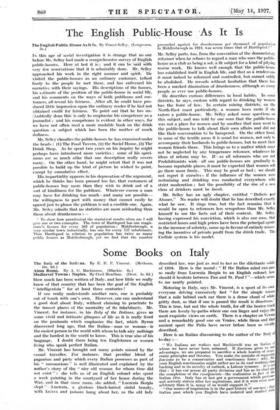 The English Public-House As It Is

The English Public-House As It Is. By Ernest Solley. (Longo-tans.

IN this age of social investigation it is strange that no one 'before Mr: Selley had Made a comprelienSive survey of English -public-houses. Here- at last it Is ; and it can be 'mi.' id"With very few reservations' that it is adMirably done. Mr. Selley approached his work in- the right manner and spirit. He Visited the public-houSes as an ordinary customer, talked freely to the-people he met there,. and hai enlivened his narrative with their sayings. His descriptions of the houses, his estimate of the position of the public-house in social life, mind his comments on the ways of both publicans and cus- tomers, all reveal his fairness. After all, he could have pro- duced little impression upon the ordinary reader if he laulnot 'obtained credit for fairness.: To point out that he haS 'rin- Chubtedly done this' is only to emphasize' hiS competence as a journalist ;-- and his competence is evident in Other ways, for we have 'not often read • a more readable bOok on the drink question—a subject which has been the mother of much dullness.

Mr. Selley classifies the public-houses he has examined under the heads : (I) The Food Tavern, (2) the Social House, (3) The Drink Shop. As he spent two years on his inquiry he might perhaps have introduced more varieties ; some of his speci- mens are so much alike that one description really covers many. On the other hand, he might retort that it was not possible to build up the kind of picture he wished to paint, except by cumulative effect.

His impartiality appears in his deprecation of the argument, which he. thinks has been pressed too far, that customers of public-houses buy more than they wish to drink out of a sort of kindliness for the publican. Whatever excuse a man may have for drinking too much—and many are possible— the willingness to part with money that cannot easily be spared just to please the publican is not a credible one. Again, Mr. Selley admits that no statistics are more misleading than those about drunkenness :- " To show how paradoxical the statistical results often are I will give one or two examples. The town of Hartlepool has one magis- trate's licence for every 362 of population ; Middlesbrough, a very similar town industrially, has ono for every 757 inhabitants. Thus Hartlepool in relation to population has twice as many public houses as Middlesbrough, yet we find that the number

proceeded against for drunkenness per thousand of population in Middlesbrough in 1924, was seven-times that of Hartlepool ! "

Mr. Selley parts, too,' from the convention of the denunciatory reformer 'when he refuses to regard a man who uses the public- hothseris a club a.s being a sot, a fit subject for a kind of pitying rescue work. He knOws well enough that the public-house has established itself in English life, and that as a rendezvous it must indeed be reformed and controlled, but cannot &dety be abolished. He records without hesitation that there has been a marked diminution of drunkenness, although as many people as ever use public-houses.

' He describes curious differences in local habits. In some 'districts, he says, custom with regard to drinking by women has the force of law. In certain mining districts; on the North-East coast particularly, a woman loses caste if she enters a public-house. Mr: Selley asked some questions on this subject, and was told by one man that the public-house was not a place for women and' by another that men went to the public-house to talk about their own affairs and did not like their conversation to be hampered. On the other hand, in some of the textile areas it is usual for Women, not only to accompany their husbands to public-houses, but to meet their women friends-there. This brings us to a matter which must not be neglected by any temperance reformer, whatever his ideas of reform may -be. If—as all reformers who are not Prohibitionists wish—all our public-houses are gradually to become reputable places, it must be expected that women will go there more freely. This may be good or bad ; we should not regret it ourselve; if the influence of the women were restraining and -drinking was. conducted everywhere with strict moderation ; but the possibility of the rise of a new

class of drinkers must be faced.- - • - Mr. Selley has an ugly chapter, entitled " Defects and Abuses." No reader will doubt that he' has described exactly what lie saw. It rings true, but the fact remains 'that it would be open to reformers less scrupulous than Mr. Selley himself to use the facts out of their context. Mr. Selley, having expressed his conviction, which is also our own, that restricted hours and high prices have been the principal agents in the increase of sobriety, sums up in favour of entirely remov- ing the incentive of private profit from the drink trade. The Carlisle system is his model.