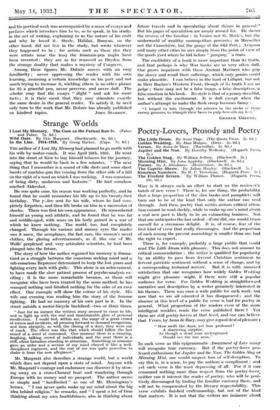 Wild Oats. By Eric Muspratt. (Duckworth. Ss. &IA In the Line. 1914-1918. By Georg Bucher. (Cape. 7s. 6d.) THE author of / Lost My Memory had planned to go north with his wife by motor-coach. It was April 24th, 1931. He went into the street at Hew to buy himself tobacco for the journey, saying that he would be back in a few minutes. "The next thing that I remember is a sound of rifle shots and sonic short bursts of machine-gun fire coming front the other side of a hill on the right of a road on which I was walking. I was conscious of being dirty, unshaven and footsore." He had somehow reached Aldershot.

He was quite sane, his reason was working perfectly, and he found that he could remember his life up to his twenty-first birthday. The r,lice sent for his wife, whom lie had com- pletely forgotten, and then life broke on him in a succession of shocks. There was first his own appearance. He remembered himself as young and athletic, and he found that lie was fat and middle-aged, with scars on his body gained in a war of which he knew nothing. The world, too, had completely changed. Through his curious and uneasy eyes the reader sees it anew, the aeroplanes, the fast cars, the women's novel clothes, the glaring advertisements, as if, like one of Mr. Wells' perplexed and very articulate scientists, he had been plunged into the future.

The story of how the author regained his memory is drama- tized as a struggle between the conscious seeking mind and a sub-conscious Repressor determined to keep the lost years and fighting every inch with guile. This alone is an achievement, to have made the slow patient process of psycho-analysis ex- citing ; it is the more remarkable because, as those will recognize who have been treated by the same method, he has scan-sped nothing and falsified nothing for the sake of an easy effect. One example will show the colour of his style. His wife one evening was reading him the story of the Somme fighting. He had no memory of his own part in it. In the street outside a motor-bicycle backfired—two or three times.

"Just for an instant the written story seemed to come to life, and to light up with the real and unmistakable glow of personal recollection. I could feel, within me, the surge of a great crowd of scenes and incidents, all pressing forward to demand recognition, and then abruptly, as with the closing of a door, they were out of reach. The effect was like that which should follow the last sound of a Word of command. One moment there is a swaying, laughing, talking crowd of individuals, and the next there is a stiff, silent battalion standing to attention. Something or someone gave an order and a section of my mind obeyed it like a well- disciplined regiment, and the rest of me was quite powerless to shake it from the new allegiance."

Mr. Muspratt also describes a strange world, but a world which does not depend upon a state of mind. Anyone with Mr. Muspratt's courage and endurance can discover it by stow- ing away on a cross-Channel boat and wandering through Europe with no money and no passport. The author seems as simple and " hardboiled " as one of Mr. Hemingway's heroes. "I can never quite snake up my mind about the big idea behind religion," he remarks, and "I spent a lot of time thinking about my own healthfulness, also in thinking about future travels and in speculating about things in general." But his pages of speculation are amply atoned for. He shows the reverse of the familiar : in Venice not St. Mark's, but the underworld of wealthy cosmopolitan perverts; in Marseilles not the Cannebiere, but the gangs of the Old Port ; Avignon and many other cities he sees simply from the point of view of the goods yard where he hid before " jumping" a train.

The credibility of a book is more important than its truth, and that perhaps is why War books are so very often dull. One grows impatient with these Ancient Mariners who grip the sleeve and recall their sufferings, which only genius could make plausible. I Call believe in the land of Lilliput, but not in Herr Bucher's Western Front, though of its truth I sun no judge ; there may not be a false image, a %Ise description, a false emotion in his book. Its style is that of a penny dreadful, but without the excitement. It is dull except when the author's attempt to make the flesh creep becomes funny :

"I longed to bite through the arteries in the necks of those enemy gunners, to trample their faces to pulp beneath my lea."