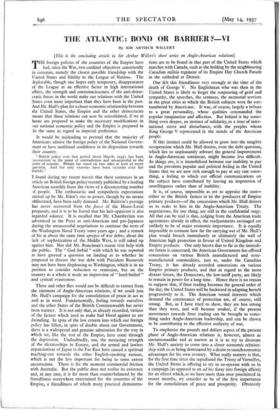 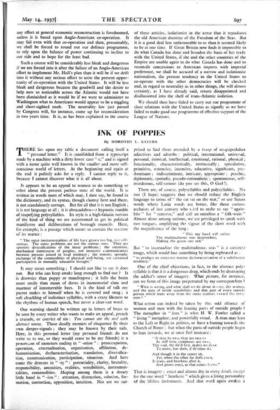 THE ATLANTIC: BOND OR BARRIER ?-VI

[This is the concluding article in Sir Arthur Willert's short series on Anglo-American relations] It would be misleading to pretend that the majority of Americans admire the foreign policy of the National Govern- ment or have undiluted confidence in its disposition towards their country.

" British policy over that period (from March, 1933), has been ..nconsistent to the point of contradiction and unsuccessful to the point of scandal. Britain has stood on two sides at least of every question. And her only victories have been victories over her friends."

I found during my recent travels that these sentences in an article on British foreign policy recently published by a leading American monthly focus the views of a disconcerting number of people. The enthusiastic and sympathetic expectations ;tined up by Mr. Eden's rise to power, though by no means obliterated, have been sadly dimmed. Mr. Baldwin's prestige has never recovered from the fiasco of the Hoarc-Laval proposals, and it is to be feared that his heir-apparent is also regarded askance. It is recalled that Mr. Chamberlain was advertised in the Press as anti-American and pro-Japanese during the unsuccessful negotiations to continue the term of the Washington Naval Treaty some years ago ; and a remark of his at about the same time apropos of war debts, about the lack of sophistication of the Middle West, is still raked up against him. Nor did Mr. Runciman's recent visit help with the public. The " God forbid " with which he was reported to have greeted a question on landing as to whether he proposed to discuss the war debt with President Roosevelt may not have been displeasing to Washington, which is in no position to consider reduction or remission, but on the country as a whole it made an impression of " hard-boiled " and cynical evasiveness.

These and other flies would not be difficult to extract from the ointment of Anglo-American relations, if we could join Mr. Hull's campaign for the consolidation of peace in act as well as in word. Fundamentally, feeling towards ourselves and the other States of the British Commonwealth has never been warmer. his not only that, as already recorded, various of the factors which used to make bad blood,against us are dwindling. In Spite of the lovi esteem into which our foreign policy has fallen, in spite Of doubts about our Government, there is a widespread and genuine admiration for the way in which we, like the rest of the Empire, have come through the depression. Undoubtedly, too, the menacing strength of the dictatorships in Europe, and the armed and lawless expansionism of japan in the Far East have caused a spiritual reaching-out towards the other English-speaking. nations, which is not the less important for being to some extent unconscious. There is for the moment commercial friction with Australia. But the public does not realise its existence and, in any case, it is far more than counterbalanCed by the friendliness everywhere entertained for the countries of the Empire, a friendliness of which many practical demonstra- tions are to be found in that part of the United States which marches with Canada, such as the holding by the neighbouring Canadian militia regiment of its Empire Day Church Parade in the cathedral at Detroit.

One felt this friendliness very strongly at the time of the death of George V. No Englishman who vvas then in the United States is likely to forget the outpouring of grief and sympathy, the speeches, the sermons, the memorial 'services in the great cities at which the British subjects were far out- numbered by Americans. - It was, of course, largely a tribute to a great personality, whose qualities commanded the popular imagination and affection. But behind it lay some- thing even deeper, an instinct of solidarity, in a time of inter- national stress and disturbance, with the peoples whom King George V represented in the minds of the American people.

If this' instinct could be allowed to grow into the tangible co-operation which Mr. Hull desires, even the debt question, which lies so unpleasantly athwart the general improvement in Anglo-American sentiment, might become less difficult. As things are, it is immobilised between our inability to pay and the prevalent popular and political feeling in the United States that we are now rich enough to pay at any rate some- thing, a feeling to which our official communications on the subject have contributed by leaving an impression of unwillingness rather than of inability.

It is, of course, impossible as yet to appraise the cost— either to the British farmer or to the producers of Empire primary products—of the concessions which Mr. Hull desires us to make to him in the Anglo-American Treaty. The negotiations, for one thing, are still in the confidential stage. All that can be said is that, judging from the American trade agreements already in effect, the readjustments envisaged are unlikely to be of major economic importance. It is equally impossible to estimate how far the carrying out of Mr. Hull's plan would breach immediately or ultimately the wall of American high protection in favour of United Kingdom and Empire products. One only knows that so far as the immedi- ate future is concerned, the American Government has offered concessions on various British manufactured and semi- manufactured commodities, just as, under the Canadian Treaty, it has already accorded concessions on various Empire primary products, and that in regard to the more distant future, the Democrats, the low-tariff party, are likely to remain in power for a long time. Hence there is no reason to suppose that, if freer trading becomes the general order of the day, the United States will be backward in adapting herself progressively to it. The Anierican vested interests which demand the continuance of protection are, of course, still strong. But, as I have tried to show, they are less strong than they were, and will become weaker, if the present movements towards freer trading can be brought to some- thing under Anglo-American leadership, and can be shown to be contributing to the effective outlawry of war.

To emphasise the pounds and dollars aspect of the present phase of Anglo-American relations is, however, almost as unstatesmanlike and as narrow as it is to try to discount Mr. Hull's anxiety to come into a closer economic relation"- ship with us as being dOminated by a desire to snatch economic advantages for his own country. What really matters is that, for the first time since she repudiated the Treaty of Versailles, the United States is offering to try to co-operate with us in a campaign (as opposed to an ad hoc foray into foreign affairs) for an object which, as we have more than Once proclaimed in recent months, we consider to be of the first importanCe for the consolidation of peace and prosperity. Obviously any effort at general economic reconstruction is foredoomed, unless it is based upon Anglo-American. co-operation. It may fail even with that co-operation and then, presumably, we shall be forced to round out our defence programme, to rely upon the balance of power continuing to incline to our side and to hope for the least bad.

Such a course will be considerably less bleak and dangerous if we are forced into it after the failure of an Anglo-American effort to implement Mr. Hull's plan than it will be if we drift into it without any serious effort to seize the present oppor- tunity of co-operation with the United States. It will be less bleak and dangerous because the goodwill and the_ desire to help now so noticeable across the Atlantic would not have, been diminished as it would be if we were to administer to Washington what to Americans would appear to be a niggling and short-sighted snub. The neutrality. law just passed by Congress will, for instance, come up for reconsideration in two years time. It is, as has been explained in the course of these articles, isolationist in the sense that it repudiates the old American doctrine of the Freedom of the Seas. But it is a good deal less unfavourable to us than it seemed likely to be at one time. If Great Britain now finds it impossible to do what Canada has done and broaden the basis of her trade with the United States, if she and the other countries of the Empire are unable again to do what Canada has done and to reconcile concessions to American imports with imperial . preference, we shall be accused of a narrow and isolationist nationalism, the present tendency in the United States to co-operate with the other democracies will be checked and, in regard to neutrality as in other things, she will almost certainly, as I have already said, return disappointed and disillusioned into the shell of trans-Atlantic isolation.