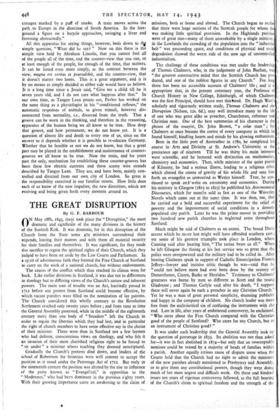 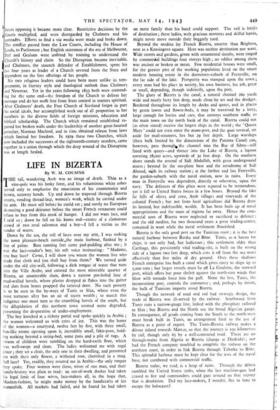 ON May 18th, 1843, there took place the " Disruption," the most dramatic and significant of the many divisions in the history of the Scottish Kirk. It was dramatic, for in this disruption of the Church from the State some 47o ministers surrendered their stipends, leaving their manses and with them all material security for their families and themselves. It was significant, for they made this sacrifice to regain the spiritual rights of their Church, which they judged to have been set aside by the Law Courts and Parliament. In a spirit of adventurous faith they formed the Free Church of Scotland to carry on the work of a national church, but without endowments.

The causes of the conflict which thus reached its climax went far back. Like earlier divisions in Scotland, it was due not to differences in theology but to differing views of the Church's nature and inherent powers. The main root of trouble was an Act, hurriedly passed in 1712 before any protest from Scotland could become effective, by which vacant parishes were filled on the nomination of lay patrons. The Church considered this wholly contrary to the Revolution Settlement reached only twenty years before ; and from time to time the General Assembly protested, while in the middle of the eighteenth century more than one body of " Seceders " left the Church in order to regain the liberties which they had lost, and in particular the right of church members to have some effective say in the choice of their minister. There were then in Scotland not a few laymen who had definite, conscientious views on theology, and who felt it an invasion of their most cherished religious right to be forced to " sit under " a minister whose teaching they deemed unscriptural.

Gradually the Church's protests died down, and leaders of the school of Robertson the historian were well content to accept the position as it stood under the Patronage Act of 1712. But early in the nineteenth century the position was altered by the rise to influence of the party known as " Evangelical," in opposition to the " Moderates," who had been dominant in the previous eighty years. With their growing importance came an awakening to the claim of missions, both at home and abroad. The Church began to realise that there were large sections of the Scottish people for whom she was making little spiritual provision. In the Highlands parishes were of great size—many of them unworkable by a single minister ; in the Lowlands the crowding of the pOpulation into the " industrial belt " was proceeding apace, and conditions of physical and social degradation showed the worst side of the new age of uncontrolled industrialism.

The challenge of these conditions was met under the leadership of Thomas Chalmers, who, in the judgement of John Buchan, was " the greatest constructive mind that the Scottish Church has pro- duced, and one of the noblest figures in any Church." For long there has been no accessible account of Chalmers' life ; and it is appropriate that, in the present centenary year, the Professor of Church History in New College, Edinburgh, of which Chalmers was the first Principal, should have met thislineed. Dr. Hugh Watt's scholarly and Vigorously, written study, Thomas Chalmers and the Disruption (Nelson, 125. 6d.), may well introduce many to the life of one who was great alike as preacher, Churchman, reformer and Christian man. One of the best summaries of his character is the phrase of the essayist, Dr. John Brown, " a solar man"; fo: Chalmers at once became the centre of every company in which he found himself, kindling hearts and minds by his glowing enthusiasm.

Born in the little port of Anstruther in 1780, he completed his course in Arts and Divinity at St. Andrew's University at the precocious age of nineteen Till he was thirty his main interests were scientific, and he lectured with distinction on mathematics, chemistry and economics. Then, while minister of the quiet parish of Kilmeny, he had a serious illness, leading to a religious crisis which altered. the centre of gravity of his whole life and sent him forth an evangelist as unwearied as Wesley himself. True, he con- tinued to speak and 'write on astronomy and economics. During his ministry in Glasgow (1815 to 1823) he published his Astronomical Discourses, which for months sold as fast as one of the Waverley Novels which came out at the same time. It was then, too, that he carried out a bold and successful experiment for the relief of poverty and the improvement of social conditions in a densely populated city parish. Later he was the prime mover in providing two hundred new parish churches in neglected areas throughout Scotland.

Much might be said of Chalmers as an orator. The broad Doric accent which he never lost might well have offended southern ears ; yet some of his greatest triumphs took place in London, where Canning said after hearing him, "The tartan beats us all." When he left Glasgow the throng at his last service was so great that the police were overpowered and the military had to be called in. After hearing Chalmers speak in support of Catholic Emancipation Francis Jeffrey—lawyer and incisive critic though he was—said that he "could not believe more had ever been done by the oratory of Demosthenes, Cicero, Burke or Sheridan." Testimony to Chalmers' greatness was borne by men so different as Scott and the young Gladstone ; and Thomas Carlyle said after his death, " I suppose there will never again be such a preacher in any Christian Church." Yet he was a man of great personal simplicity, shunning publicity and happy in the company of children. No church leader was more free from the ecclesiastical sin of confusing the instrument with the end. Late in life, after years of embittered controversy, he exclaimed, " Who cares about the Free Church compared with the Christian good of the people of Scotland? Who cares for any Church, but as an instrument of Christian good? "

It was under such leadership that the General Assembly took up the question of patronage in 1833. Its abolition was not then asked for—it was in fact abolished in 1874—but only that, an unacceptable nominee could be vetoed by a majority of heads of families within a parish. Another equally serious cause of dispute arose when the Courts held that the Church had no right to admit the ministers of the new parishes already mentioned to Presbytery and Assembly, or to give them any constitutional powers, though they were doing much of her most urgent and difficult work. On these and kindred issues ten years of vigorous controversy followed, as the full bearing of the Church's claim to spiritual freedom and the strength of the forces opposing it became more clear. Restrictive decisions by the Courts multiplied, and were disregarded by Chalmers and his comrades. - Efforts to find a via- media were made and broke down. The conflict passed from the Law Courts, including the House of Lords, to Parliament ; but English statesmen of the era of Melbourne, Peel and Graham were unfitted by training to understand the Church's history and claim. So the Disruption became inevitable, and Chalmers, the staunch defender of Establishment, spent his last four years as leader of a Church severed from the State and dependent on the free offerings of het people.

No two religious leaders could have been more unlike in tem- perament, in literary style and theological outlook than Chalmers and Newman. Yet in the yeirs following 1833 both were contend- ing for the same end—the freedom of the Church to deliver her message and do her wofk free from State control in matters spiritual. After Chalmers' death, the Free Church of Scotland forgot in part his social ideals, but accomplished work out of all proportion to her numbers in the diverse fields of foreign missions, education and biblical scholarship. The Church which remained established re- paired her broken walls under the leadership of another great-hearted preacher, Norman Macleod, and in time obtained release from laws which limited her freedom. In 1929 these two Churches, which now included the successors of the eighteenth-century seceders, came together in a union through which the deep wound of the Disruption was at length healed.,