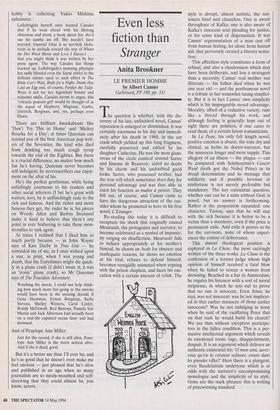 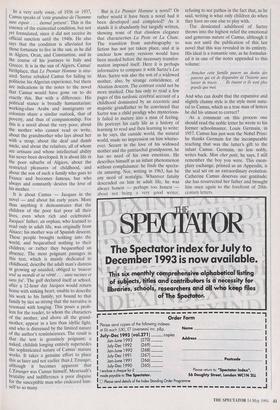 Even less fiction than Stranger

LE PREMIER HOMME by Albert Camus Gallimard, FF 100, pp. 331 by Albert Camus Gallimard, FF 100, pp. 331 The question is whether, with the dis- covery of his last, unfinished novel, Camus' reputation is enlarged or diminished. It was certainly enormous in his day and immedi- ately after his death in 1960, in the car crash which yielded up this long fragment, carefully preserved and edited by his daughter Catherine. He was the most glam- orous of the circle centred around Sartre and Simone de Beauvoir, aided no doubt by his charm and his undoubted good looks. Sartre, who possessed neither, had the iron will which sometimes does duty for personal advantage and was thus able to exert his function as maitre a penser. They fell out, of course, and Camus came to have the dangerous attraction of the out- sider whom he promoted to hero in his first novel, L'Etranger.

Re-reading this today it is difficult to recapture the shock that originally caused Meursault, the protagonist and narrator, to become celebrated as a symbol of impassiv- ity verging on disaffection. Meursault fails to behave appropriately at his mother's funeral, he shoots an Arab for obscure and inadequate reasons, he shows no emotion at his trial, refuses to defend himself, becomes vestigially animated when arguing with the prison chaplain, and faces his exe- cution with a certain amount of relish. The style is abrupt, almost autistic, the sen- tences brief and clauseless. One is aware throughout of Kafka; one is also aware of Kafka's innocent soul pleading for justice, or for some kind of dispensation. It was Camus' representation of a man cast off from human feeling, let alone from human aid, that perversely created a literary sensa- tion.

This affectless style constitutes a form of refusal, and also a classlessness which may have been deliberate, and less a stratagem than a necessity. Camus' real mother was illiterate — his father died when he was one year old — and the posthumous novel is a tribute to her somewhat taxing simplici- ty. But it is in fact Camus' own simplicity which is his impregnable moral advantage. Morality, albeit of a reductive variety, runs like a thread through his work, and although feeling is generally kept out of sight there are pointers, if one cares to read them, of a certain latent romanticism.

In La Peste, his only full length novel, positive emotion is absent, the tone dry and clinical, as befits its doctor-narrator, but the sentences longer and more supple. This allegory of an illness — the plague — can be compared with Solzhenytsin's Cancer Ward (both got the Nobel Prize) in its dread determinism and its message that solidarity and if possible heroism in misfortune is not merely preferable but mandatory. The key existential question, whether one can be a saint without God, is posed, but no answer is forthcoming. Rather is the proposition expanded: one character, Tarrou, says that he will stay with the sick because it is better to be a victim than a murderer, even if the price is permanent exile. And exile it proves to be for the survivors, none of whom experi- ences the ecstasy of deliverance.

This almost theological position is explored in La Chute, the most excitingly written of the three works. La Chute is the confession of a former judge whose high opinion of himself received a fatal blow when he failed to rescue a woman from drowning. Beached in a bar in Amsterdam, he regales his listeners with a sort of moral striptease, in which he sets out to prove that no one is innocent. Even Jesus, he says, was not innocent: was he not implicat- ed in that earlier massacre of those earlier innocents? Was he not indulging in irony when he said of the vacillating Peter that on that rock he would build his church? We are thus without exception participa- tors in the fallen condition. This is a per- suasive intellectual argument which reveals its emotional roots: rage, disappointment, despair. It is an argument which delivers an authentic existential hit: '0 mon ami, saver- vous qu'est la creature solitaire, errant dans les grandes villes?' Here there is a plangent, even Baudelairian undertone which is at odds with the narrator's uncompromising monologue and the simplicity of its style. Gone are the stark phrases: this is writing of prizewinning standard. In a very early essay, of 1936 or 1937, Camus speaks of `cette grandeur de l'homme sans espoir . . . eternel present'. This is the essence of the existential condition, but not yet formulated, since it did not receive its official sanction until the 1940s. He also says that the condition is alleviated for those fortunate to live in the sun, as he did in Algiers, Oran, and Constantine, and in the course of his journeys to Italy and Greece. It is in the sun of Algiers, Camus' birthplace, that Le Premier Homme is situ- ated. Sartre rebuked Camus for failing to politicise his Algerian experience, but there are indications in the notes to the novel that Camus would have gone on to do exactly this. But with a difference. His political stance is broadly humanitarian: working-class Arabs and immigrants or colonists share a similar outlook, that of poverty, and thus of companionship. For this is a novel about the very poor, about the mother who cannot read or write, about the grandmother who lays about her with a strap, about the deaf and dumb uncle, and about the relatives, all of whom are artisans and whose intellectual ability has never been developed. It is about life in the poor suburbs of Algiers, about the restricted pleasures of childhood, and about the son of such a family who goes to France and becomes famous, but who always and constantly desires the love of his mother.

It is about Camus — Jacques in the novel — and about his early years. More than anything it demonstrates that the children of the poor feel poor all their lives, even when rich and celebrated. Jacques' father, an orphan, who learned to read only in adult life, was originally from Alsace; his mother was of Spanish descent. These people brought nothing into the world, and bequeathed nothing to their children, or rather they bequeathed an absence. The most poignant passages in this text, which is mainly dedicated to childhood, describe the adult man's distress at growing up unaided, obliged to lrouver seul sa morale et sa verite . . sans racines et sans for . The gulf declared itself at school; after a 12-hour day Jacques would return home with sinking heart, unable to describe his work to his family, yet bound to that family by ties so strong that the narrative is resonant with longing. This poses a prob- lem for the reader, to whom the characters of the mother, and above all the grand- mother, appear in a less than idyllic light, and who is distressed by the limited nature of the author's reminiscences. The result is that the text is genuinely poignant; a naked, childish longing entirely supersedes the sophisticated nature of Camus' mature works. It takes a genuine effort to place this as later and not earlier than L'Etranger, although it becomes apparent that L'Etranger was Camus himself, Meursault's brutality and indifference a poor disguise for the susceptible man who endeared him- self to so many. But is Le Premier Homme a novel? Or rather would it have been a novel had it been developed and completed? As it stands it is abundantly but turgidly written, showing none of that classless elegance that characterises La Peste or La Chute. The transition from autobiography to fiction has not yet taken place, and it is unclear how many versions would have been needed before the necessary transfor- mation imposed itself. Here it is perhaps informative to compare it with Sartre's Les Mots. Sartre was also the son of a widowed mother, also, by strange coincidence, of Alsatian descent. The contrast could not be more marked. One has only to read a few pages of this sardonic cerebral account of a childhood dominated by an eccentric and majestic grandfather to be convinced that Sartre was a child prodigy who mysterious- ly failed to mature into a man of feeling. He portrays his early life as a history of learning to read and then learning to write: as he says, the outside world, the natural world, made no impression on him whatso- ever. Secure in the love of his widowed mother and the patriarchal grandparent, he has no need of his own emotions. He describes himself as an infant phenomenon without complaisance: he finds the specta- cle amusing. Nor, writing in 1963, has he any need of nostalgia. Whatever fatuity descended on him in adult life, he was always honest — perhaps too honest about not being a very good writer.

refusing to see pathos in the fact that, as he said, writing is what only children do when they have no one else to play with.

The dessicated adulthood of Sartre throws into the highest relief the emotional and generous nature of Camus, although it was not until the publication of this last novel that this was revealed in its entirety. His ideal is a romantic one, as he formulat- ed it in one of the notes appended to this volume:

And who can doubt that the expansive and slightly clumsy style is the style most natu- ral to Camus, which as a true man of letters he did his utmost to correct?

As a comment on this process one should read the noble letter he wrote to his former schoolmaster, Louis Germain, in 1957. Camus has just won the Nobel Prize: he thanks Germain for the incomparable teaching that was the latter's gift to the infant Camus. Germain, no less nobly, writes back. Mon cher petit, he says, I still remember the boy you were. This exem- plary exchange, printed as an Appendix, is the seal set on an extraordinary evolution. Catherine Camus deserves our gratitude: she has resurrected her father and brought him once again to the forefront of 20th- century letters.