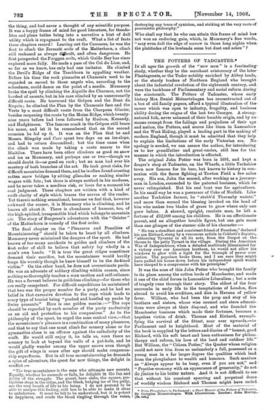 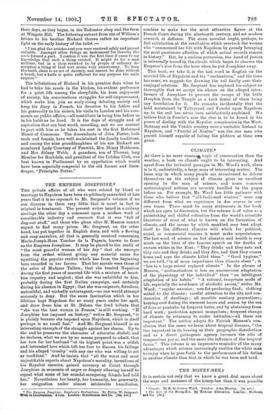 THE POTTERS OF TADCASTER.*

IN all ages the growth of the "new men" is a fascinating- study, whether they be the merchant aristocracy of the later- Plantagenets, or the Tudor nobility enriched by Abbey lands, or the sturdy traders of Northern England who brought- about the industrial revolution of the eighteenth century, and: were the backbone of Parliamentary and social reform during- the nineteenth. The Potters of Tadcaster, whose early history Mrs. Daniel Meinertzhagen has reconstructed out of a box of old family papers, afford a typical illustration of the- career which was open to industry, frugality, and business ability during the reigns of the last two Georges. A strong. natured folk, never ashamed of their humble origin, and by no- means exempt from the failings and prejudices of their age and nation, the Potters, and scores like them in Lancashire and the West Riding, played a leading part in the making of

' modern England, though it must be admitted that they help to explain the limitations of the early Victorian era. No- apology is needed, we can assure the author, for introducing- us to her grandfather and great-uncles, still less for the- manner in which the introduction is effected..

The original John Potter was born in 1691, and kept a . draper's shop at Tadcaster, on the Wharfe, a little Yorkshire town now famous for its beer, but -known to history in con- nexion with the fierce fighting at Towton Field a few miles- away. His son, John the second, after working as a journey- man in London, succeeded to the paternal business, which he- never relinquished. But his real bent was for agriculture. In his small way he was a precursor of Coke of Norfolk. Like- another Yorkshire farmer, he " stubb'd Thurnaby waiiste," and more than earned the blessing invoked on the head of him who makes two blades of grass to grow where only one- grew before. A shrewd, upright, resolute man, he left a. fortune of £12,000 among his children. He is an affectionate- parent, and an altogether lovable figure, but one gets more- than one glimpse of the sterner side of his character :- " He was a steadfast and consistent friend of Freedom," declared' his son Richard, stung by a venomous article in Cobbett's Register,. "abhorring Tyranny in all its acts, from the Despot on the- throne to the petty Tyrant in the village. Daring the American, War of Independence, when a deluded multitude illuminated for a victory over our American brethren, he would not allow his: windows to glow with a light for the triumph of power over justice. The populace broke them, and I am sure they might. have pulled his house down before his independent spirit would.. have stooped to a compromise with his principles."

It was the sons of this John Potter who brought the family' to its place among the cotton lords of Manchester, and made- it one of the chief forces in Lancashire Liberalism ; but a note of tragedy runs through their story. The eldest of the four- succumbs in early life to the temptations of London, flies. abroad to avoid his creditors, and dies in Havana of. yellow fever. William, who had been the prop and stay of his. brothers and sisters, whose wise counsel and stern admoni- tions were always at their disposal, and who founded the Manchester business which made their fortunes, becomes a. hopeless victim of drink. Thomas and Richard, exempli- fying the survival of the fittest, soar ever upwards,—to Parliament and to knighthood. Most of the material of ' the book is supplied by the letters and diaries of "honest, good Richard, with his soft heart and keen enthusiasm for philan- thropy and reform, his love of the land and outdoor life."` But William, the " Citizen Potter," the Quaker whose religion-. could not save him from so melancholy a fall, possessed as a . young man in a far larger degree the qualities which lead from the ploughshare to wealth and honours. Such maxims. as "Always appear to be busy, even if you are not," and "Practise economy with an appearance-of generosity," do not-. do jrtatice to his better nature. And it is not difficult to see.- that without his constant spurring and perpetual doses-. of worldly wisdom Richard and Thomas might have ended..

* From Ploughshare to Parliament: a Short Memoir of the Potters of Tadcaster. By Georgina litentextthagen. With Illustantionn. London: 'John Murray._ PAN nett]

-their days, as they began, in the Tadcaster shop and the farm -at Wingate Hill. The following extract from one of William's letters to his brother Richard throws rather an important light on the early history of the toilet :-

" I am glad the articles sent you were received safely and proved suitable. Amongst other things an instrument for cleaning the' mails formed a part. I confess it was the first time it came to my knowledge that such a thing existed. It might do for a man milliner, but in a shop resorted to by people of ordinary de- scription a thing of that sort seems very unnecessary. To keep the teeth clean is an act of decency, and cannot be done without .a brush, but a knife is quite sufficient for any purpose the nails require."

The tribulations of Richard in his prentice days when he had to take his meals in the kitchen, his evident preference for a quiet life among the sheepfolds, his keen enjoyment of society, his conscientious struggles for self-improvement, which make him join an early-rising debating society and . keep his diary in French, his devotion to his father and his generosity to his sisters, his visits to London and his com- ments on public affairs,—all contribute to bring him before us in his habit as he lived. It is the days of struggle and of aspiration that are best worth recording, and we are content to part with him as he takes his seat in the first Reformed House of Commons. The descendants of John Potter, both male and female, have well maintained the family traditions, and among the nine granddaughters of his son Richard are numbered Lady Courtney of Penwith, Mrs. Henry Hobhouse, and Mrs. Sidney Webb. A grandson, son of Thomas, long Member for Rochdale, and president of the Cobden Club, was best known in Parliament by an appellation which would have been especially congenial to the old farmer and linen- draper, "Principles Potter."