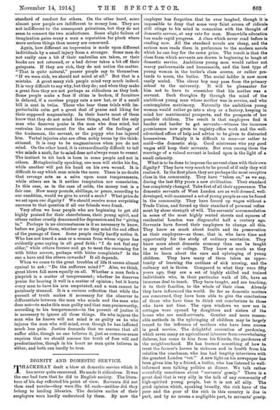 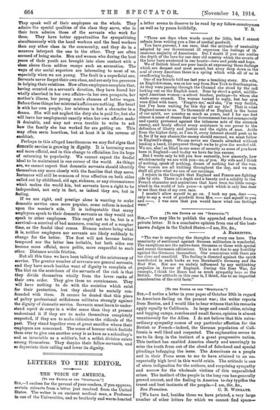 THACKERAY dealt a blow at domestic service which it has never quite recovered. He made it ridiculous. It was the one bad turn that he did to English society. The litera- ture of his day reflected his point of view. Servants did not then read novels—they were 31s. 6d. each—neither did they belong to lending libraries. The derisive smiles of their employers were hardly understood by them. By now the

employer has forgotten that he ever laughed, though it is impossible to deny that some very faint aroma of ridicule still clings to his mind in connexion with the thought of domestic service, at any rate for men. Meanwhile education has made rapid progress. A class which never read before is reading now. All the standard novels are cheap, and the serious man reads them in preference to the modern novels which he can buy for the same price. The result is that the class from which servants are drawn is beginning to laugh at domestic service. Ambitious young men would rather not marry parlourmaids and housemaids, and the best type of young woman in the butler's class scorns, or rather pre- tends to scorn, the butler. The social ladder is now more easily scaled. The clever boy may pass from the primary school to the university. It will be pleasanter for him not to have to remember that his mother was a servant. Such thoughts fly through the mind of the ambitious young man whose mother was in service, and who contemplates matrimony. Naturally the ambitious young woman would rather go into a shop or a factory, keeping in mind her matrimonial prospects, and the prospects of her possible children. The result is that employers find it harder and harder to get servants—witness the immense prominence now given to registry-office work and the well- advertised offers of help and advice to be given to distracted housewives. Plainly it is difficult to man—or rather to maid—the domestic ship. Good mistresses who pay good wages still keep their servants. But even among them the marriage of a valued servant is looked upon in the light of a small calamity.

What is to be done to impress the servant class with their own dignity They have very much to be proud of if only they will realize it. In the first place, they are perhaps the most receptive class in the community. They have "taken on," as we say, during the last fifty years a new civilization. Their standard has completely changed. Take first of all their appearance. The domestic servants of West London are as well-dressed, well- developed, well-mannered a set of young people as can be found in the community. They have forced up wages without a Trade Union, and forced up their standard of personal refine ment by sheer 'strength of will. The servants' accommodation in some of the most highly rented streets and squares of residential London was disgraceful half a century ago. Servants have forced their employers to change all this. They know as much about health and its preservation as their employers—as those, that is, who have time and opportunity for the study of ordinary sanitation. They know more about domestic economy than can be taught in any school or college. They know as much as they like to learn about the care and upbringing of young children. They have many of them taken an oppor- tunity of learning the outlines of sick nursing, and the culinary art is theirs. Compared to what they were fifty years ago, they are a set of highly skilled and trained individuals who, in their particular walk of life, have an immense deal to teach. They have taught, and are teaching, it to their families, to the whole of their class. Already they have influenced the world. So far as domestic matters are concerned, they have been able to give the conclusions of those who have time to think out conclusions to those who have not time. The open windows we now see in cottages were opened by daughters and sisters of the house who are maid-servants. Gentler and more reason- able methods in the upbringing of children may be largely traced to the influence of mothers who have been nurses in good service. The delightful recreation of gardening, which saves many an agricultural labourer from overwhelming dulness, has come to him from his friends, the gardeners of the neighbourhood. He has learned something of how to treat the farmer's horses in sickness and in health from his relation the coachman, who has had lengthy interviews with the greatest London "vet." A new light on his newspaper has been given him by a friend, a butler, who has listened to well- informed men talking politics at dinner. We talk rather scornfully sometimes about "servants' gossip." There is a great deal that is very silly in the talk of any community of high-spirited young people, but it is not all silly. The good opinion which, speaking broadly, the rich have of the poor and the poor of the rich in this country is due in part, and by no means a negligible part, to servants' gossip.

They speak well of their employers on the whole. They admire the special qualities of the class they serve, who in their turn admire those of the servants who work for them. They have better opportunities for sympathizing simultaneously with the hand workers and the head workers than any other class in the community, and they do in a measure interpret the one to the other. They are often accused of being snobs. Men and women who during the best years of their youth are brought into close contact with a class above them seldom escape such an accusation. The ways of obr social superiors are interesting to most of us, especially when we are young. The fault is a superficial one. Servants never forget their own class, and are only too generous in helping their relations. How often employers complain that, having counted on a servant's devotion, they have found her wholly absorbed in her own affairs—in her own prospects, her mother's illness, her young man's chances of better wages. Before these things her mistress's affairs are nothing. Her heart is with her own people ; her mistress is but a character in a drama. She will not neglect the duty she is paid for, but she will leave her employment exactly when her own affairs make it desirable, and may not even trouble to write to ask how the family she has worked for are getting on. This may often seem heartless, but at least it is the reverse of snobbish.

Perhaps in this alleged heartlessness we may find signs that domestic service is growing in dignity. It is becoming more and more official, and in this change to officialism lies its hope of returning to popularity. We cannot expect the feudal ideal to be maintained in one corner of the world. As things are, we cannot expect that domestic servants should identify themselves any more closely with the families that they serve. Instances will still be common of true affection on both sides called out by childhood, old age, sickness, or any circumstance which makes the world kin, but servants have a right to be independent, not only in fact, as indeed they are, but in feeling.

If we are right, and prestige alone is wanting to make domestic service once more popular, some reform is needed upon the master's side. It is indisputable that many employers speak to their domestic servants as they would not speak to other employees. This ought not to be, but is a survival—a survival of bad manners, coming out of a rougher time, as the feudal ideal comes. Human nature being what it is, neither employers nor servants are likely suddenly to change for the better. The first will not become better tempered nor the latter less irritable, but both sides can become more official, more polite, more respectful to each other. Distance avoids friction.

But all this time we have been talking of the aristocracy of service. The greater number of servants are general servants, and they have much besides want of dignity to complain of. The blot on the scutcheon of the servants of the rich is that they divide themselves wholly from the lower ranks of their own order. They give them no countenance. They will have nothing to do with the societies which exist for their protection, lest they should be socially con- founded with them. It cannot be denied that this piece of paltry professional selfishness militates strongly against the dignity of domestic service. Servants must learn to under- stand esprit de corps in a wider sense than they at present understand it if they are to make themselves completely respected, if they are to make ridiculous the ridicule of the past. They stand together even at great sacrifice where their employers are concerned. The sense of honour which forbids them ever to give one another away is as keen as a schoolboy's and as invariable as a soldier's, but a selfish division exists among themselves. They despise their fellow-servants, and so depreciate their calling and lower its dignity.