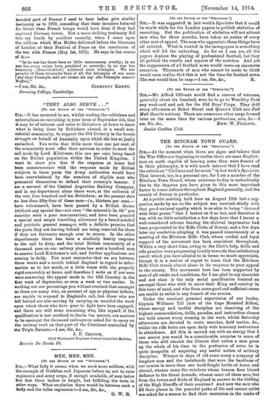 THE "SPECTATOR."] Sin,—It has occurred to me, whilst reading the criticisms and exhortations on recruiting in your issue of September Stle that it may be of interest and value to Britishers at home to know what is being done by Britishers abroad, in a small non- colonial community, to support the Old Country in the heroic struggle on behalf of humanity upon which she has so justly embarked. You write that little more than one per cent. of the community must offer their services in order to meet the call made by Lord Kitchener, this one per cent. being based on the British population within the United Kingdom. I want to show you that if the response at home had been commensurate with the response made by British subjects in these parts the Army authorities would have been overwhelmed by the numbers of eligible men who presented themselves to defend their country's honour. I am a servant of the Central Argentine Railway Company, and in my department alone there were, at the outbreak of the war, four hundred and ten Britishers; at the present date no less than fifty-four of these men—i.e., thirteen per cent.— have volunteered, have been passed by a British doctor (without any special fee—not even "the miserable 2s. 641." you consider such a poor remuneration), and have been granted a special and ample travelling allowance by a broad-minded and patriotic general manager, with a definite promise that the posts they are leaving behind are being reserved for them if they are fortunate enough ever to return. In the other departments there has been a similarly hearty response to the call to duty, and the total British community of a thousand men on our railway alone has sent a hundred men to answer Lord Kitchener's call, and further applications are coming in daily. You must remember that we are between three weeks and a month behind England in regard to infor- mation as to her needs, or a little worse with the properly rigid censorship at home, and therefore I write as if our men were answering the appeal made in the Old Country in the first week of September, or even a week or two earlier. In working out our percentage you will not overlook that amongst us there are many who, on account of age or physical defects, are unable to respond to England's call, but those who are left behind are also serving by carrying on unaided the work upon which those who have gone to fight have been engaged, and there are still some remaining who, like myself, if the qualification is not confined to limits too narrow, are anxious to be amongst the thousand railwaymen asked for to carry on the railway work on that part of the Continent controlled by the Triple Entente.—I am, Sir, &c.,